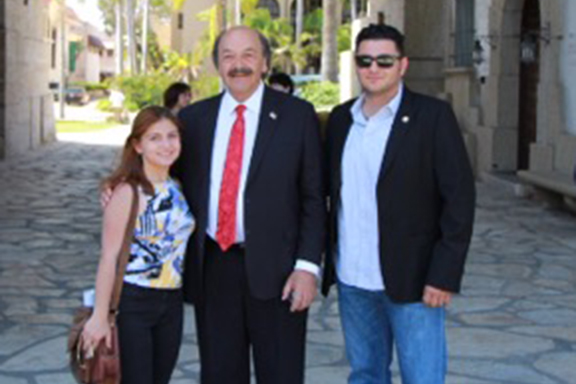 We Lost a Titan of our Community.

Words will not do justice for the loss I felt when I hard that former California State Assemblyman, Former Congressional Candidate Katcho Achadjian had left us.

I had a flood of so many good memories of the man that was Assemblyman Katcho Achadjian, that I feel compelled to tell you, the reader. While a simple google search can show you voluminous information about the work he did for Californians everywhere, I’d like to share with you how the man, who became everyone’s uncle, impacted me.

I first met Katcho Achadjian at a meet-and-greet sponsored by the ANCA Western Region as an intern. I was very green; a kid still trying to figure it out. I was there representing an organization I had officially joined as an intern just one week before this event. I saw a kind, spirited, yet soft-spoken man standing in the corner, away from the main crowd, just talking to people. I had not been to many functions like this before, so I was doing what any ANCA intern would do; I struck up a conversation with this man, who was wearing his ARF “zinanshan,” knowing he would be safe to talk to. Just minutes later, he introduced himself to the people there as “Katcho.”

He was in my hometown of Glendale, and came to visit from the California’s central coast, his home town Arroyo Grande to be exact. He told his story… a story of a person, much like my own father, who came to the United States with a dream.

But behind that story was a man who had a deeper, more inspiring story. He moved to the United States from Lebanon. He was the offspring of genocide survivors. He went to Cal Poly San Luis Obispo. He ran a successful business, which later became several successful businesses.

But he took it many steps further, as one of the most beloved elected officials of the central coast, in all of California, as a well-respected Republican who worked with people across the aisle, a person loved by his colleagues, and a giant for the Armenian cause.

For me, the most inspiring and beautiful thing about him was his love for Armenians everywhere. You could not get him to say something about the Armenian cause without him breaking a tear. When the Turkish Lobby would visit Sacramento, Assemblyman Achadjian would politely decline meetings with them, but sternly remind them of the terrible wrongs that they were continuing to perpetrate. Same with the Azeris. Same with anyone who had the nerve to paint our community in a less-than-stellar light.

Over the years, through my activism, I had the privilege of seeing him in Sacramento through Advocacy Day. He wasn’t just another politician; he was the man who would run point for the ANCA. Through the Western Region’s Government Affairs Committee, we developed an intimate working relationship with him and his staff. His office was our home base.

Walking in and introducing him to constituents was a distinct privilege, as I would tell them that they would be pleasantly surprised, just before the assemblyman would show us to his office.

It was definitely a wonderful office, but with a familiar twist. He had a wall clock made of petrified wood, and I promise you if you go to any Armenian household in Hollywood, you will see the same clock.

He had an ARF “zinanshan” to the right of his desk, which I’m sure was common in every Armenian office from Beirut to Baalbek, from Ainjar to Aleppo. It felt more like the office of a private Armenian School principal. Of course, it would not be complete without Saroyan’s “See if They will not Create a New Armenia” passage, in the form of a framed poster. In that corner of his office, you would see a memento about every three inches that was related to his Armenian roots; a tri-color, the coat of arms of Armenia… There was just the feeling of, at any minute, someone from the staff showing up with mezze and sourj. Of course, that last part was wishful thinking, until the first time I visited him in his hometown of Arroyo Grande.

When the ANCA-WR wanted to branch out deeper into into the central coast, several of my colleagues and I were tasked with reaching out to the community, and that meant none other than having Assemblyman Achadjian’s support. I knew the area well, because I went to UC Santa Barbara, and any town on the central coast was similar in character to where my alma mater is located.

I have to confess. At that point, he wasn’t even Assemblyman Achadjian anymore. He just became “Amo.” Katcho was just like an uncle, a composite of an Armenian man who had lived a similar life to my or your uncle.

It was surreal. I was talking to someone who was essentially a family member at that point, yet having to remind myself that this man was an elected official. But that was Amo. Everything about him was so genuine and wholesome. While in town, everyone would greet him by first name when we went to have lunch together. With each discussion of legislation or policy, it was interwoven with a lighthearted memory of his times in Lebanon, his stories as an assemblyman n Sacramento… He even offered me a cigar, which I politely declined.

Not long after, when he ran for congress, several Armenian community activists, including Hasmik Baghdasaryan and I, had the privilege of being at the Santa Barbara courthouse as he made his announcement, in familiar hues of Spanish architecture, just minutes from where I graduated. It was one of those proud moments you get to experience as an activist: knowing that a good person, a kind spirit, is about announce his run for federal office.

Katcho Achadjian was one of the lions of our community; educating, donating books, quietly proud of his roots, and always making sure everyone felt welcomed around him. You would never even hear a peep about his advocacy for our cause, because he did it quietly and proudly, without being boastful like so many others who hold elected office. He let his work do the talking.

Of my many dreams, one was to share a scotch and a cigar with him and talk shop, when I earned that privilege. That never happened, but I was certain that one day it would.

But I will tell you the things that would happen. He would, even with his busy schedule, take time to comment on my Facebook posts, message me privately and encourage me to keep fighting the good fight, and would often say “I’m proud of you.”

Amo, our entire community will forever be proud of you. May you forever rest in power.