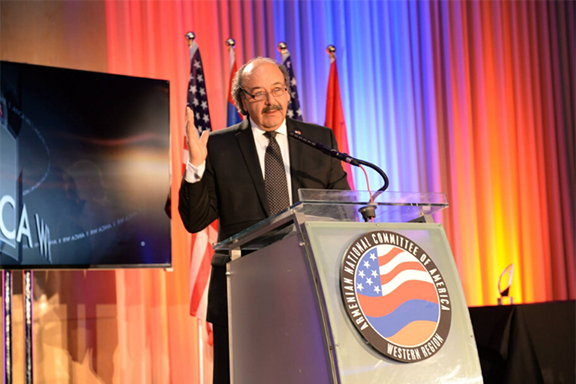 Former three-term California State Assemblymember, long-time Homenetmen member and staunch supporter of the Armenian National Committee of America Khatcho Achadjian passed away Thursday. He was 68. Cause of death was attributed to longtime health issues.

Achadjian passionately represented his San Luis Obispo constituents in the California State Assembly, always known for advancing the interests of his constituents and “getting things done.”

An Armenian immigrant from Lebanon, Katcho was a true patriot and active member of our community, helping to mentor young Armenian-Americans to engage in politics and setting an example for many by proudly highlighting his Armenian heritage while so ably representing his constituents of the 35th Assembly District of San Luis Obispo and surrounding areas.

After being elected as the first Armenian-American immigrant to the California State Assembly in 2010, Katcho took the lead in promoting the Armenian Cause in Sacramento and beyond. He spearheaded numerous initiatives in the state legislature, including Armenian Genocide education in public schools, promoting the Divest Turkey campaign, supporting the independence of Artsakh, calling upon Turkey for the return of Armenian churches, and condemning Azerbaijan for its ongoing aggression against Armenia and Artsakh.

A recipient of the Mkhitar Gosh Gratitude Medal bestowed by Artsakh President Bako Sahakyan, Achadjian was also honored as the ANCA-WR Legislator of the Year at its annual gala banquet in 2013. Throughout the six years of his tenure, he generously assisted in ensuring the success of numerous ANCA-WR events, including annual Advocacy Days in Sacramento, serving as a panelist at the 2015 ANCA-WR Grassroots Conference, traveling to Los Angeles from San Luis Obispo to enthusiastically support ANCA-WR town halls and banquets, and highlighting the ANCA-WR by recognizing its chair, Nora Hovsepian, as one of 80 Women of the Year in the State Capitol in 2015.

Achadjian was highly respected for his humble and proud nature, exemplary ethics, passionate commitment to his beliefs, and his ability to bridge the gap across political divides. As a testament to his dedication toward uniting opposing sides to achieve results, Achadjian was the only Republican to be appointed as a committee chair by Speaker John Perez, a Democrat.

Following his service in the California State Assembly, Achadjian made an unsuccessful run for Congress then returned to his self-made business career. He remained a generous supporter of the Armenian community, serving with his beloved wife Araxie as Honorary Presidents of Homenetmen’s 2016 Navasartian Games.

“Leaving an indelible mark both in California politics and the Armenian Cause, Katcho Achadjian’s legacy will live on forever. On behalf of the entire ANCA Western Region family of local chapters, grassroots activists and dedicated volunteers, and especially those who had the honor and privilege of working with our beloved Katcho, the ANCA-WR Board of Directors extends its heartfelt condolences to his wife Araxie, his son and daughter-in-law Hratch and Nina, and his daughter Nyri, and joins them in mourning the loss of a true Armenian-American patriot,” said a statement by the ANCA-WR board.

“The Homenetmen Western U.S. Board members and its chapters would like to express their sincere condolences to his wife, K. Madame President Araxie, his children Hratch and Nyri and the entire Achadjian family,” said a post on the organization’s Facebook page. “He is gone from our sight, but never from our hearts! May his soul Rest In Peace.”