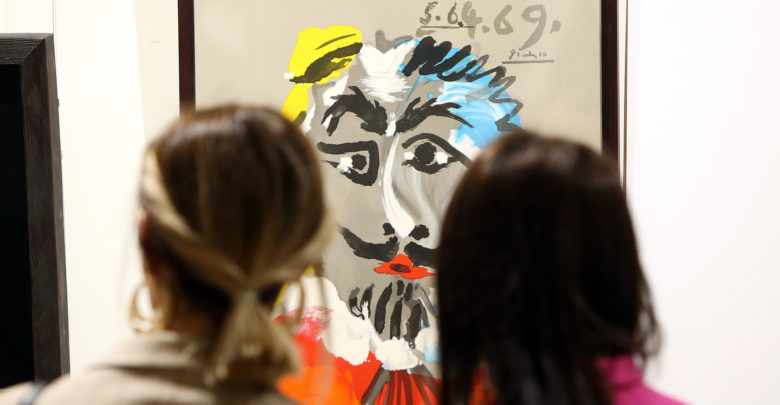 An exhibition titled Dali and Picasso – a specific dialogue of the two artists who have never had a joint exhibition – opened at the National Gallery of Armenia today.

Salvador Dali appeared in the whirl of Parisian avant-garde thanks to Picasso. They first met in 1926 in Picasso’s art studio. The latter helped Dali to travel to the US, and this played a decisive role for his creative achievements.

Despite the fact that Picasso was an ideal for Dali, the latter’s vainglory was an obstacle for them to become close. Dali’s eccentric behavior and arrogance led to his mania of constantly surpassing Picasso.

The two celebrated masters, the symbols of the 20th century fine art, though constantly showing false and ostentatious “aversion” to each other in their entire life, in fact have always appreciated and evaluated each other’s work.

Picasso would later say that he liked Dali’s art; still he didn’t want to meet him not to make a fuss over his name due to their meeting.

Works of the two artists juxtaposed in the exhibition give the Armenian art-lovers an exclusive opportunity to move to their imaginary world. The exhibition displays 260 artworks by Salvador Dali and Pablo Picasso (sculptures, graphic works and ceramics) from the private collection of the president of “Art of the Nations” Foundation, patron of art and collector Alexander Shadrin.

The exhibition has already been displayed in a number of countries before coming to Armenia. Alexander Shadrin has replenished the collection within fifteen years. It is among major collections of Dali’s works and a significant collection of Picasso’s ceramic works in the world.

Salvador Dali’s bronze sculptures were acquired in 2006 from The Dali Universe Foundation, established by the artist’s friend Beniamino Levi; the lithographic works were obtained from the family of famous collector and Dali’s friend Pierre Argillet in 2011. Next year Picasso’s best ceramic works were acquired from the prestigious “Christie’s” auction house. They had been taken out for sale by the Ramier family.