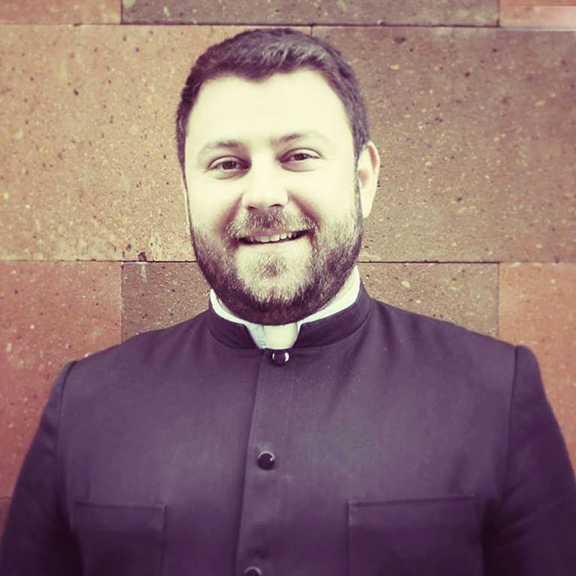 Rev. Zakaryan is no stranger to St. Vartan Church, having served in Oakland for eight months as a Deacon alongside the late Rev. Mesrob Sarafian in 2009.

Members of the St. Vartan Armenian Church and community are encouraged to join Rev. Zakaryan on Sunday, March 8 as he celebrates his first Divine Liturgy as the new pastor. After the service, there will be a welcome reception in the church hall to meet Rev. Krikor and his family.

Rev. Krikor was born in 1977 in Plovdiv, Bulgaria and received his primary education at the Dimitar Blagoev school in Plovdiv. He continued his education at the Victoria and Krikor Tutundjyan Armenian school, graduating in 1992. Between 1997 and 1999, he served in the Bulgarian army.

In 2003, Rev. Krikor was admitted to the Alex and Marie Manoogian Seminary of the Armenian Patriarchate in Jerusalem. His dedication to the seminary and his high marks earned Rev. Zakaryan numerous awards. He graduated in 2007. Rev. Krikor Zakaryan received the rank of Fourth-Degree Acolyte of the Armenian Holy Apostolic Church from His Beatitude Archbishop Torkom Manoogian, the Armenian Patriarch of Jerusalem and was ordained to the Diaconate by Archbishop Nourhan Manougian.

On October 13, 2009, Rev. Krikor Zakaryan was ordained into the priesthood by Primate of the Western Diocese of the Armenian Church of North America Archbishop Hovnan Derderian.

Rev. Krikor Zakaryan completed his Master’s Degree in Theology (Major – “Ministry, Leadership and Service”) in 2014 at the Claremont School of Theology, Claremont, Califonria and also completed a Youth Ministry Certificate program at Fuller Seminary in Pasadena in 2017.

Rev. Zakaryan has been actively involved as a Religious Advisor for the Diocesan Christian Education Council, Camp Committee and Camp Board, serving the youth on a Diocesan level.

Rev. Krikor Zakaryan is married to Yeretzgin Anoush Yazadzhiyan from Bulgaria and they are blessed with two daughters, Emma and Grace.

The St. Vartan Armenian Church is excited to welcome back Rev. Krikor and his family to Oakland.