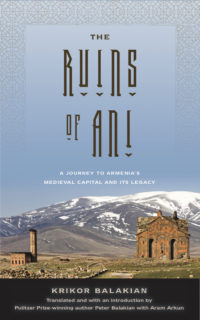 Review: A Look Back at Ani at Its Height, and at Its Nadir

After a complex history of conflicts and usurpations, Tamerlane’s invasion in the 1380s made Ani “an uninhabited place” by the end of the century.

In the late 1800s Ani was revived as a nexus of scholarly interest. The renewed vision of Ani also deepened a patriotic sense that, in Peter Balakian’s words, “the Armenian past is still touchable,” and that “past glory and present suffering are part of a conjoined history.” The city came to represent not only the aesthetic achievements of the Armenian nation, but also the power that once undergirded them.

Krikor Balakian’s account of his visit mixes the ecstatic and the solemn. The revelry of a group of pilgrims — in the company of the Catholicos of All Armenians, whose predecessors had not been to Ani on an official visit for “nine long centuries” — keeps him up at night in the monastery after a day of touring the “half-destroyed ruins” he depicts carefully in this book. But he is also haunted by the memory of his encounter with Ani, which had stored the memory of Armenian decline; Turkey conquered the city during the genocide and continues to suppress all references to its Armenian heritage.

This new edition of The Ruins of Ani is not merely an informative description of a dazzling city that became a “great museum of the arts and crafts of Armenian antiquity.” It is also an intriguing document of trans-historical and cross-generational imagination. The “richness and opulence” that “always [aroused] the greed of conquering rulers” when Ani was in its prime have long vanished, but eyes are converging on the city once more.

(This review by originally appeared in the Times Literary Supplement in February.)