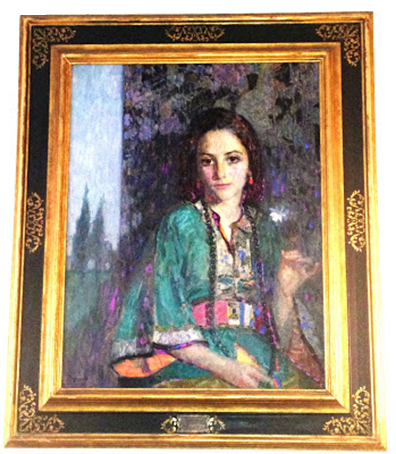 Woodrow Wilson House and the Art of Hovsep Pushman

WASHINGTON — Recently, the Woodrow Wilson House in Washington, wrote a blog entry about a painting titled “L’Esperance” by Hovsep Pushman at the museum. The painting hangs above the fireplace in the drawing room at the Woodrow Wilson House and is a beautiful portrait of a young girl holding a small flower. However, the meaning behind the portrait is much deeper than just a painting that is pleasing to the eye.

Hovsep Pushman, the artist, was born in Armenia in 1877. He studied art in Istanbul, Paris, and Chicago, and was later naturalized as a U.S. citizen. Gaining much of his influence from oriental art, he stressed the importance of three main components in his artwork: color, modeling, and imagination. However, in all of Pushman’s paintings, color seems to be the most important out of all the components.

The Near East was in a state of turmoil at the same time as World War I, during Woodrow Wilson’s presidency. Armenian families and their children were devastated by conflict between Turks and Armenians. The United States was very active in relief efforts.

On November 27, 1917, Hovsep Pushman’s wife led a delegation of Armenians to the White House to meet Wilson. The youngest member of the group, Miss Alidz Kurkjian, presented the painting to Wilson. She gave a short speech expressing the Armenian people’s appreciation for the United States’ efforts to help them in their time of need.

The painting depicts Pushman’s niece, Dora, at the age of 14 dressed in traditional Armenian costume. The look of sadness on her face represents the suffering of the Armenian people. It also represents the thousands of little children who perished as a result of the genocide, as well as those who were completely dependent on charity for survival. The flower Dora holds is a Mountain Snowdrop. Some cultures in the Near East see the flowers as good luck and protection from evil. Its appearance in Armenia is a sign that winter is ending and that spring is on its way — a sign of hope for better times. Dora and the flower symbolize the hope for the future of Armenia, helped by Americans. The inscription on the frame reads: