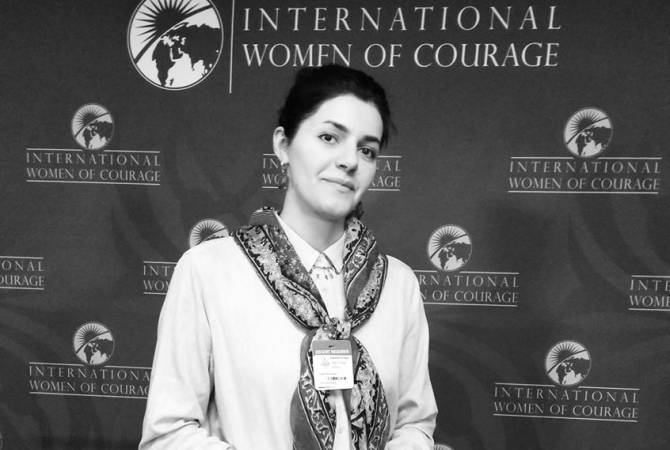 YEREVAN, MARCH 4, ARMENPRESS. For the first time since the inception of the US Secretary of State’s International Women of Courage (IWOC) Awards, an Armenian recipient will be honored and recognized with the award.

12 women from around the world will be honored at the Annual International Women of Courage (IWOC) Awards at the U.S. Department of State on March 4 in Washington D.C.

US Secretary of State Mike Pompeo will host the awards, and First Lady Melania Trump will deliver remarks to recognize the extraordinary accomplishments of the awardees.

For the first time since IWOC’s inception in 2007, the award will be bestowed to an Armenian recipient this year. Lucy Kocharyan, a journalist who is fighting against sexual and domestic violence, has been selected to be recognized for her activities.

“Using her platform as a journalist, Kocharyan has championed children with mental health issues and has emerged as a leading voice in the fight against psychological, physical, and domestic violence against women and children.  Through her dedication and resolve, Kocharyan became famous for launching “Voices of Violence” in August 2018.  She has become a spokesperson on gender-based violence in Armenia and has continued to speak out despite harsh criticism – from people on the street who yell “shame” as she passes by, to parliamentarians speaking out against her and threatening her with lawsuits.  She successfully started a conversation about domestic and sexual violence that is slowly leading to some action. Gender-based violence is a pervasive problem throughout Armenia, where traditional social norms regarding masculinity, femininity, gender equality, and the division of household tasks remain rigid, making her achievements and impact all the more impressive”, the State Department said in a media note announcing the recipients.

“Now in its 14th year, the Secretary of State’s IWOC Award recognizes women around the globe who have demonstrated exceptional courage and leadership in advocating for peace, justice, human rights, gender equality, and women’s empowerment, often at great personal risk and sacrifice.  Since the inception of this award in March 2007, the Department of State has recognized 134 women from 73 countries. This year will bring the total to 146 awardees from 77 countries. U.S. diplomatic missions overseas nominate one woman of courage from their respective host countries. The finalists are selected and approved by senior Department officials. Following the IWOC ceremony, the 12 awardees will participate in an International Visitor Leadership Program (IVLP) visiting various cities throughout the country, before reconvening in Los Angeles for the conclusion of their program on March 16”.