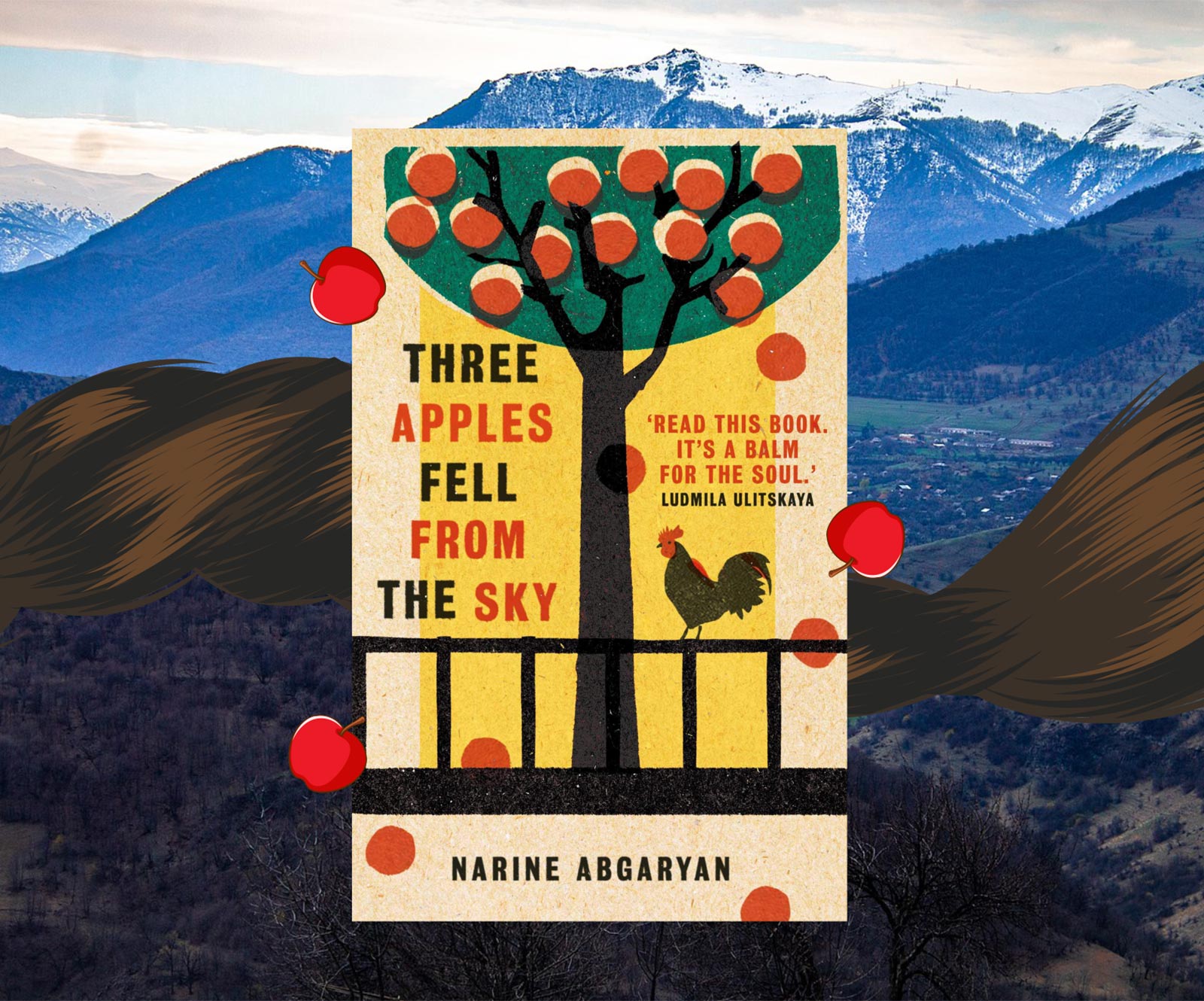 Already a sensation in Russia and the Caucasus, Armenian writer Narine Abgaryan’s first work to be translated into English unpicks the anguish and agony that sends shockwaves through families.

How to make sense of tragedy? This is the premise of Narine Abgaryan’s slim, sentimental novel Three Apples Fell From the Sky, now translated into English five years after becoming a bestseller in Russia. The tragedy in question is not a single moment or extraordinary occurrence but rather a hereditary affliction, passed down the generations, believed to have brought famine, suffering, infertility, and death to Maran, a remote village in the Armenian highlands.

This affliction appears to have its origins in a curse that befell one of the village’s inhabitants, Voske Sevoyants, after she was forced to marry the fiance of her sister who died just days before their wedding. As we arrive onto the scene, decades have passed and the curse has become a kind of accepted custom; the long hair of the family’s female members the only perfunctory protective measure they believe they can take against its detrimental effects.

Anatolia Sevoyants, Voske’s only surviving daughter, is the central figure in a cast of well written, if a little one-dimensional, characters. There is the blacksmith, the priest, the always-ready-to-help neighbour, and the chirping of chickens, goats, and a somewhat important peacock. While the book opens with Anatolia laying down “to breathe her last”, quite predictably, her last becomes only the first of a compelling transformation which offers potential release from the inherited curse and a second chance at romantic love.

With the curse forming the novel’s central energy source, Three Apples shares something with Nino Haratsichvili’s epic novel The Eighth Life (2019), set over a similar time period in neighbouring Georgia, which traces the perceived consequences of a cursed hot chocolate recipe on the Jashi family during the rise and fall of the Soviet Union. As with Haratischvili’s Jashis, Abgaryan’s Sevoyants – sev meaning black in the village’s language of Maran – were “a rational superstitious people who nevertheless believed in dreams and signs”. They channel their grief into superstition and mysticism, as perhaps, the only comfort in formless cruelty is the belief it is part of a divine plan. Abgaryan – who writes in Russian but is of Armenian descent – is less interested in what these signs resemble but how people construct the networks of meaning by which they live.

Three Apples is told in a fabular style, split into three sections – “For the One Who Saw”, “For the One Who Told the Story”, “For the One Who Listened” – which echo the Armenian folktale on which the title is based. Time oscillates from present to past and back again, but the narrative voice remains fixed in a monotonous but entrancing melody, as one might deliver a psalm. The narrator of Three Apples feels as though they are standing at a nearby vantage point, close enough to the detail to smell the “aroma of slices of spongy homemade bread” but at a sufficient distance to see the villagers’ story on a more cosmic timeline.

Time oscillates from present to past and back again, but the narrative voice remains fixed in a monotonous but entrancing melody, as one might deliver a psalm

Abgrayan’s prose, translated by Lisa C. Hayden, is vivid and offers moments of spine-tingling imagery (“The evening sky that May was low and sticky, with a bilberry tint”, “eyes the colour of cooled cinders”) evoking these lush lands of pomegranates, apple trees, and baked bread. But on occasion they feel too searching and constructed, and veer into hyperbole (“that dialogue united, indissolubly and forever, two young hearts that hungered for love”). Yet, Abgaryan’s literary project is not one of realism, but one in which she strives to create an environment where suffering and resilience show themselves as interchangeable aspects of the human spirit.

Time in Three Apples appears to be organised more around the unpredictable whims of Demeter (harvests, seasons, geological events) than the calendar, though there are vague allusions to the region’s 20th-century history: there is mention of a villager who “was forced to flee the new regime that overthrew the tsar at the beginning of the last century” while “the North” – in other words, Russia – is referred to as a place of people with strange names who “poop flowers”. This playful allusion to their northern neighbours illustrates both the myths urban and rural communities tell themselves about the other, but also their remoteness from, what was then, the seat of Soviet governance in Moscow.

The village of Maran is not just culturally and politically estranged, but cut off physically too; an old telegraph wire and unsystematic visits from the postman are its only connection with the outside world. It is no wonder then, that the object of focus turns inward, to the language of the winds, the prophecies of gypsies and where the villagers place the highest of significance, dreams. Even the afterlife — despite living in proximity to death through famine, earthquakes, disease — feels remote, as “the other edge of the universe” is guarded by “seven huge seals, each the size of the eye of a needle and the weight of an entire mountain”.

It is not until the final page that Abgaryan reveals how the fable should be read, and it is an unquestionably moving coda. If the book suffers moments of predictability and hyperbole, these are forgiven as Abgaryan finds ways to conduct the warmth of the villagers directly into the reader’s soul. As the book’s title suggests, there are gifts to be found in this novel, if you are prepared to look, listen, and feel.