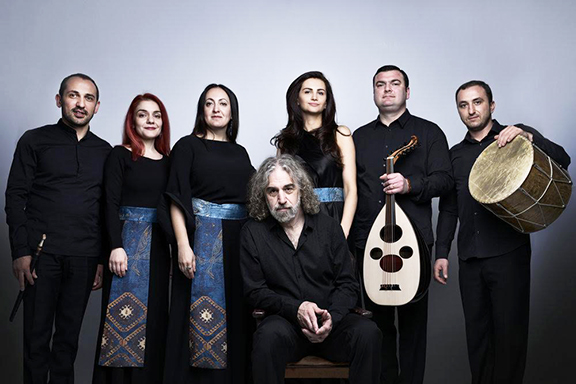 The Resurrection of Naghash and Hovhannes

Editor’s Note: The introductory booklets published with the trilogy were provided by both Wiebke Zollmann and John Hodian.

Mkrtich Naghash (1394-1470) was a high-ranking religious leader of Armenians of Amid (Dikranagerd), when he was exiled by the Ottoman authorities, because he erected a church steeple taller than any of the neighboring mosques. He was also a poet and a miniature painter, hence his name, and he wrote about the plight of the wanderer or the “ghareeb” – the stranger. To reach his people, he wrote in a more colloquial oral style characteristic of an Armenian bard. All that we have today of him are some poems and a few paintings based on the books of the bible.

A descendant of genocide survivors, John Hodian was raised in Philadelphia and New York. He lived in Berlin, Germany, until he moved to Yerevan. Hodian is a modern day ghareeb himself. He is a composer and performer, who finds himself “traveling all over the world, often feeling homeless.”

Wiebke Zollmann was born in 1990 in Germany. “In 2009, I went to Armenia for the first time to volunteer with the Foundation for Preservation of Wildlife and Cultural Assets. Later, I studied Creative Writing in Bienne, Switzerland, taught at Brusov University in Yerevan from 2014 to 2015, and then started to work with The Naghash Ensemble in 2016. I’m a creative writer of poetry, prose, and feature stories. I occasionally work as a photographer and translator from English, French, and Armenian into German,” said Zollmann.

When asked how The Naghash Ensemble came to be, Hodian said, “The idea for The Naghash Ensemble came when I first heard Hasmik singing in the ancient Temple of Garni outside of Yerevan, Armenia. She primarily sang medieval Armenian spiritual music and her beautiful voice, combined with the astounding acoustics of Garni, left an indelible impression in my mind for days after. I was determined to write something that would use this sound in a new way. It took several years to discover the right text. I spent many months researching in the libraries of Yerevan, New York, and Berlin. When I finally came across a small fragment of the Armenian medieval poet Mkrtich Naghash, the words leapt off the page and into my soul and I knew I had found what I was looking for.”

In Yerevan he was able to find all 15 poems that have come down from Naghash. “The words, while philosophical, were addressed to the common man of Naghash’s time and I find them as relevant today as they were in the 1400’s,” remarked Hodian.

The music he composed came naturally from the texts, he says. The instruments too “were chosen intuitively.”

Hodian was not sure if what he was trying to do was really worth the effort. Was he really creating Armenian music? “The question of identity looms large for Armenians and, in my case, the question of cultural identity and, specifically, musical identity is huge,” he tells Lilly Torosyan of Hamazkayin’s “h-pem” online magazine in an interview. At one point, he wanted to have Tigran Mansurian’s opinion. After listening to a rough recording Hodian had provided him with, the renowned composer “put his hand on my shoulder, looked me in the eye and said: ‘It is the sound of ancient Cilicia reinvented for the 21st century.’”

“In 2010 I formed The Naghash Ensemble to play this newly created music. Featuring some of Armenia’s finest vocalists and instrumentalists, the ensemble made their debut in Yerevan on October 14, 2012 at Komitas Chamber Music Hall.” The ensemble was formed to play the four vocal pieces which were to be included on the first disc. However, “by the time the recording was finished The Naghash Ensemble became an ongoing endeavor,” Hodian said.

When asked how she got involved with The Naghash Ensemble, Wiebke Zollman said, “I fell in love with The Naghash Ensemble’s music many years ago, when the first CD was just being created. I supported a fundraiser for the ensemble’s first CD and was thrilled with the music of “Songs of Exile, Volume I.” It deeply touched my soul. For a while, I helped the ensemble with translations and other volunteer work until, in 2016, I started representing the ensemble in Europe. It’s extremely rewarding to see how different audiences all across the continent respond incredibly well to this music. To me, this music is a phenomenal ‘ambassador’ of the Armenian culture, and I’m very happy to be able to help these musicians to reach a wider audience.”

“For one year, while I taught at Brusov University, I would attend a different concert almost every day, anything from traditional Armenian folk, Komitas’ arrangements, rock, jazz, classical music, just exploring the local music scene. I heard a lot of wonderful music and can’t really explain why especially the traditional Armenian music caught my interest,” said Zollmann when asked what drew her to Armenian music. “I didn’t have much musical education, so I listened with my heart, and I was fascinated. The Naghash Ensemble took my enthusiasm even further, as it combines a sound that seems truly Armenian to me with contemporary classical influences and a lot of energy. I can play this music to people, for example, in Germany who usually exclusively listen to classical music, rock, or world music – and they will enjoy it equally much.”

The booklets accompanying the CDs contain introductory texts, as well as the poems and beautiful paintings of Mkrtich Naghash.

Nareg Hartounian of the Naregatsi Institute and many others have been supportive of The Naghash Ensemble’s collective effort, with their contribution of funds, translations, research, and much more.

In the introduction of “Volume 1” we read: “Naghash’s poems were often an outgrowth of his sermons. They implore one to ‘Take stock of one’s life. Don’t make foolish decisions. Don’t form attachments to the ‘things’ of this world. Nothing here endures.’ This stream of thought is also a major force in medieval Islam and Buddhism. It is interesting to note that these three major religions are in very close interchange at this time in this part of the world across the Silk Road.”

“In Volume II the poems are more concerned with how to function in this world so that one is prepared for life in the next world. … A unique trait of Naghash’s use of language is that it addresses both the elite and the underprivileged. His scathing words of warning are directed at world leaders and clergymen as well as the common man. In many of these poems Naghash stresses that no matter who we are, we are all headed for the same ‘home’ be it death or the afterlife. … It is amazing to me how timeless Naghash’s subject matter is. … The concept that returns over and over is the perils of a life dominated by greed. Again Naghash’s concerns remain pertinent as our society continues to be stricken with a gross inequality of wealth and power.”

In Volume III, as Dr. Michael Bedrosian Pifer mentions, “Naghash responded to the death of his son, and the loss of so many other youths during his lifetime, in part by composing a lament that is brilliantly set to music on this recording. In this poem, Naghash encourages us to make provisions for our departed loved ones through prayer. The poem, in other words, reflects a call to action—a call to increase one’s participation in the spiritual life of the community, centred in Holy Mass. Likewise, as Naghash stresses in his many poems, we must not forget our obligations to one another. … Naghash’s poems found broad reception far beyond his hometown. Most notably, even the first printed book of Armenian poetry, published in Venice in 1513, contains many of Naghash’s poems. Armenians living around the pre-modern globe clearly found something resonant in his words, something that spoke not only to the particularities of the Armenian condition, but also to a more broadly human experience.”

This year, The Naghash Ensemble will be visiting a number of cities in Canada and the U.S.

I would like to conclude this article with another quote from Hodian’s interview with h-pem. When h-pem’s Torosyan asks Hodian: “In a poetic way, you have resurrected a man from the abyss – or more fittingly, the exile – of time and lost memory. Was it your intention to retrieve the exile(d) through music?” John answers: “No, in many ways it was Naghash who revived me. I had been a composer for all of my life, but to survive in New York, I spent years scoring many films and television shows. I was very successful, but I didn’t feel attached to any of it. I finally just stopped all of the commercial work I was doing and decided that I would only write for myself. But I was lost for many years and not writing anything. It wasn’t until I heard Hasmik’s voice and later discovered the poems of Naghash that a fire was ignited and the vision for what would become The Naghash Ensemble came into shape.”

I strongly believe Naghash’s story is also that of John, or rather Hovhannes!