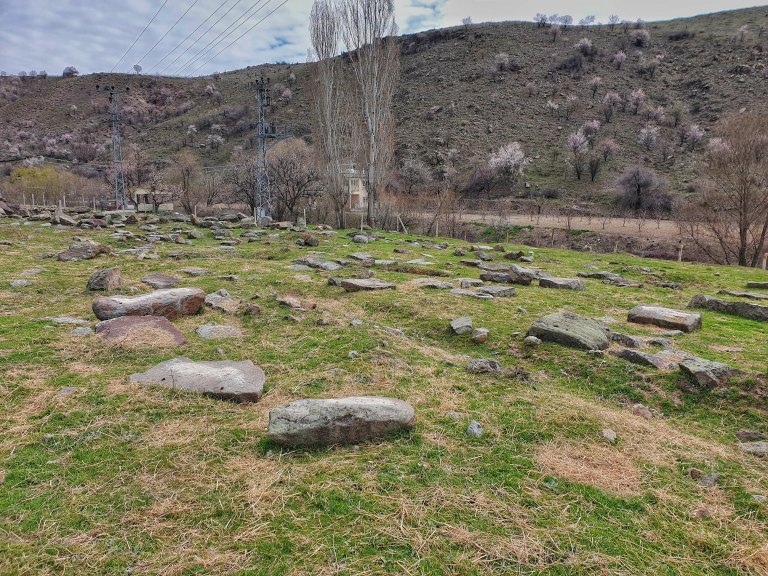 Remnants of an Old Armenian Village Near Ankara

Last summer, Argun Konuk, a 24-year-old Turkish travel and history enthusiast, published an article about the Armenian village of Stanoz located near Ankara.
Konuk reported that Stanoz was “once a prosperous Armenian village in the Ottoman era, now, nothing but ruins and tombstones…. Old Armenian manuscripts reveal that the first inhabitants of the village of Stanoz came from Cilicia in the 15th century. As records show, the population of Stanoz before World War I was 3142 people (668 families) and consisted of Armenians only. Up until its abandonment, Stanoz remained an Armenian-speaking settlement.”
The residents of the village of Stanoz were skilled in carpet weaving, embroidery and leather processing. Furthermore, they produced fabric from goat hair which was in high demand in Europe. The villagers were also knowledgeable about agriculture, cattle-breeding and construction.
Konuk also reported that unfortunately the only things that remain in Stanoz now are the graveyard, a stone bridge, and ruins of an Armenian Church. The damage was mostly caused by Turkish gravediggers or treasure hunters. The size of the graveyard keeps shrinking as the Turkish neighbors have been encroaching on the property.
Stanoz was mentioned in the journals of many travelers for centuries. An 18th Century British military officer, Frederick Burnaby, reported that during his visit to Stanoz, one of the Armenian priests told him that Armenians of Stanoz live in peace with people who practice Islam and Judaism.
Konuk also reported that “the well-known Turkish traveler Evliya Celebi shared remarkable anecdotes in his journal about this village after his visit in 1643. He spoke of Stanoz as a wealthy town with impressive productivity. Furthermore, he shared that Stanoz had a thousand dwellings, a big bazaar, a fully functioning Turkish bath and even a laundromat.”
There were three religious buildings in Stanoz: Sourp Prgich Church, Karasoun Manoug Church and a Protestant church. There were two Armenian schools: Sourp Ghevontyan School with 140 male and 40 female students and Lusignan School with 50 male and 35 female students.
Due to the Genocide and deportation of Armenians by Ottoman Turkey, many Stanoz residents were either killed or fled the area leaving the village as a ghost town.
The writer found that currently only three Armenians live in Stanoz. Kevork Balabian, who was born in Stanoz, told Konuk: “Stanoz had 1200 households and a population of 7-8 thousand. Ottomans valued Stanoz a lot. At the time, the Armenian population of Stanoz migrated to modern cities such as Istanbul, Marseille and Beirut. Only my wife and I, who came from Hatay, and our daughter live in the region. I go there often as I have a farm and a vineyard. Some treasure hunters come there in hopes of pillaging and finding some valuable artifacts but they are afraid of me so they mostly leave. We have graves there and I still look after them”
An old Turk told Kunuk: “We all grew up with Armenians, went to the same schools. Back then if you were hungry, you could easily knock on an Armenian’s door and ask for food and it was the same for them. We did many things together. There was an Armenian doctor whose name was Mihran Kiremitchi. Every single child who was born in this region owes him so much as he cared for everyone and cured everyone’s child regardless of ethnicity and social class. We never saw him asking for money from anyone. And again, weddings, funerals, everything else, we did together with the Armenians. We even celebrated religious holidays together. They used to paint eggs and we used to sacrifice animals. We miss them.”
An Armenian by the name of M. Suryan wrote in Aravod newspaper on April 28, 1919: “Some of the houses of Armenian residents who were exiled during World War I were looted and robbed. A considerable part of Albanians and Bosnians resettled in these abandoned homes. The new residents demolished many of the structures and provided firewood by removing wooden pillars, floor-ceiling boards of many homes. Moreover, instead of acquiring wood from the forest, they cut the fruit trees in the gardens to warm up. The aftermath was appalling as this notable village became dilapidated ruins. Gradz Kar, a small Armenian village, which consisted of twenty houses, located an hour away from Stanoz, also suffered the same fate.”
Konuk is highly offended that Turkish gravediggers have violated the sanctity of the Armenian graves: “The graveyard is particularly in such an abject condition that human bones are scattered around the graves that are pillaged by the treasure hunters and many of the tombstones are damaged. The tombstones are priceless. Each of them represent historical importance, however, their current state is heartbreaking. Even now after devastating centuries, there are still many artifacts and historical objects lying around. For me the most appalling thing was to see some human bones scattered around the graves. In hopes of finding gold or other valuable goods, treasure hunters dig the graves illegally and throw around the bones of the Armenians who are resting there eternally. Undeniably, this is an extreme case of disrespect.”
Konuk concluded his report with the following heart-warming words: “We Turks lived with Armenians in peace for centuries and I believe this place should carry the same importance as other Turkish cemeteries. Regardless of ethnicity and religion, the Turkish state should have taken measures to protect the memory of this village. Unfortunately, the future of Stanoz seems bleak. It is quite sad to see that this old and notable settlement completely vanished…. After five months of my first visit, I decided to go there again and it shocked me to see that many tombstones were missing! The Armenians of Stanoz were our kin. Who knows what stories and secrets this settlement has to tell us. Unfortunately we will never learn them.”
Harut Sassounian California Courier Editor