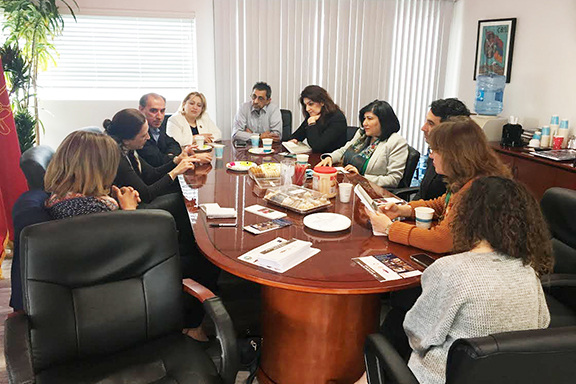 Vice-President of Christians In Need Foundation Siobhan Nash-Marshall arrived in Los Angeles, California on February 19. The trip was first and foremost intended to establish new connections between CINF and the Armenian communities and organizations of Glendale and Pasadena. A series of lectures and meetings were organized in tandem with the Ararat Foundation for this purpose.

On February 20, Nash-Marshall gave her first presentation as part of the Vartanantz Event at the Los Angeles City College. More than 100 students attended the event which was centered around the celebration of St. Vartan’s victory in defeat at Avarayr.

The following day, Nash-Marshall met with Archbishop Hovnan Deridian at the Western Armenian Prelacy. Later in the day, she gave her second presentation at the Armenian Cilicia Evangelical Church in Pasadena. The presentation, titled “Faith & Love – Mission to Artsakh,” discussed CINF’s aims as a charity organization and highlighted its active educational programs in Artsakh.

On February 22, CINF President Rita Mahdessian and Nash-Marshall met with representatives of the Armenian National Committee of America, Armenian Educational Foundation, and Focus with Children Now. These meetings were extremely fruitful and showed promise for future collaboration.

“The gathering with Siobhan Nash-Marshall was truly inspiring. Her selfless contributions to the development of Artsakh as a nation is such meaningful work to our Armenian community. We are grateful that Siobhan has devoted herself to our cause, especially the fight for Armenian Genocide recognition. ANCA Glendale is honored to have met with Siobhan because she exemplifies how the Armenian Cause resonates with everyone who is seeking for justice,” remarked ANCA Glendale Chairperson Lucy Petrosian.

On February 23, Nash-Marshall gave her final presentation at the Merdinian School in Sherman Oaks, wrapping up her tour in California. Titled “Faith in Artsakh: Protecting the Boarders of the West,” the lecture again served to showcase CINF’s initiatives in Artsakh and, more importantly, stressed the need to protect and defend the country. As Nash-Marshall often describes it, Artsakh remains “the Easternmost front of the Western world.”

This mid-February trip proved to be very successful and promising for CINF. The Foundation looks forward to working with these new friends and partners to continue to support Artsakh and other Armenian communities in need.