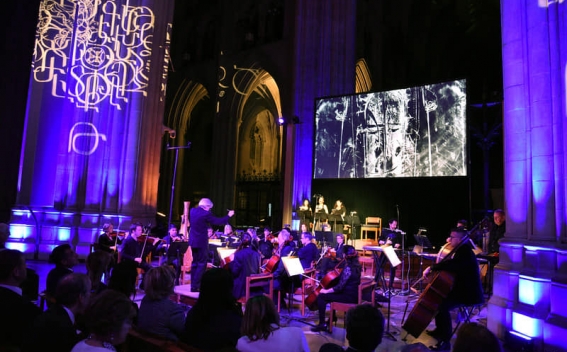 Anna Hakobyan, wife of the Prime Minister of Armenia, attended a concert dedicated to the 100th anniversary of the establishment of Armenian-American diplomatic relations at Washington National Cathedral, as reported Anna Hakobyan’s Spokesperson.

On March 4, an unprecedented multimedia-concert dedicated to the 100th anniversary of the establishment of Armenian-American diplomatic relations was held on the sidelines of the Armenian Odyssey: Color of Pomegranate Festival and organized by the Embassy of Armenia to the United States of America, in partnership with PostClassical Ensemble.

Among the attendees of the concert, the guest of honor of which was wife of the Prime Minister of Armenia Anna Hakobyan, were US Congressmen, top government officials, ambassadors accredited to Washington DC, leaders of church dioceses, benefactors, as well as members of Armenian American organizations, political parties and the Armenian community.

The concert began with a performance of the song “Dle Yaman” by proclaimed dudukist Jivan Gasparyan.

In his speech, Ambassador of Armenia to the United States of America Varuzhan Nersisyan particularly emphasized the selection of the venue for the event and recalled that US President Woodrow Wilson is buried there. The Ambassador stated that Woodrow Wilson’s humanitarian activities pave the way for recognition of the Armenian Genocide a century after the genocide and expressed gratitude to the attending Congressmen and their colleagues who voted in favor of the resolutions for Armenian Genocide recognition.

Talking about the velvet, non-violent revolution that took place in Armenia, Ambassador Nersisyan stated that Armenia’s democratic advancement served as a new impetus for the deepening and strengthening of Armenian-American relations.

Afterwards, Nersisyan gave the floor to US Assistant Secretary of State for Educational and Cultural Affairs Marie Royce, who touched upon Armenian-American diplomatic relations, stated that culture plays a special role in this context and attached importance to the current level of cooperation in education and science.

During the concert, PostClassical Ensemble was accompanied by famous cellist Narek Hakhnazaryan and dudukist Jivan Gasparyan Junior. The music was accompanied by Kevork Mourad’s multimedia illustration devoted to Sayat-Nova, and the composer of the music composed especially for this concert is famous composer Vache Sharafyan.