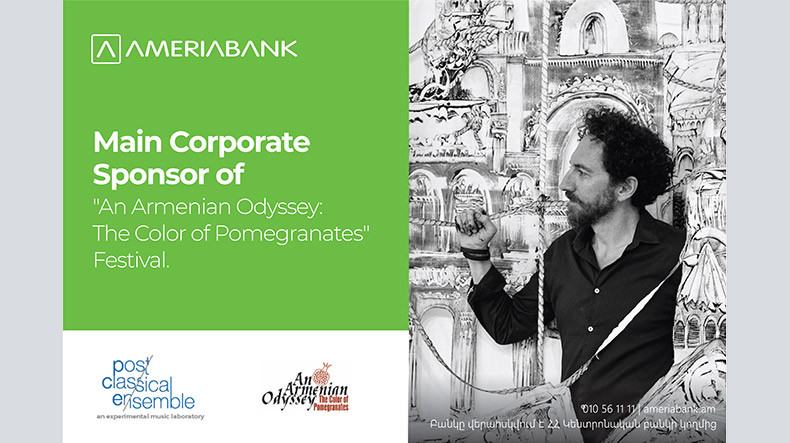 Ameriabank as a promoter of Armenian culture: Launch of “An Armenian Odyssey: The Color of Pomegranates” festival

“An Armenian Odyssey: The Color of Pomegranates” festival was launched in Freer Gallery, Washington, DC on February 29 with “A Tribute to Sergei Parajanov” event. Advocating for dissemination of Armenian culture abroad, Ameriabank acts as the Main Corporate Sponsor of the festival. The Armenian Festival is produced by PostClassical Ensemble and the Embassy of Armenia to the USA.

As the Bank reported in a press statement, the program includes Armenian movie screenings and concert programs.

The central event of the Festival is scheduled on March 4, at 7.30pm at Washington National Cathedral.

Jivan Gasparyan, the legendary duduk virtuoso, along with Jivan Gasparyan Jr, and, world-renowned cellist, Narek Hakhnazarian will perform. PostClassical Ensemble, conducted by Angel Gil-Ordonez, will also perform a world premiere piece composed specially for this event by the eminent composer Vache Sharafyan. Kevork Mourad, a Syrian-Armenian artist, will illustrate in real-time to the music. The events in Washington will be attended by cultural, public and political figures from Armenia.

The festival will be closed on March 14 at the National Gallery of Art with screening as a tribute to Rouben Mamoulian, famous Armenian-American film and theater director.

For more details about the Festival events you can follow the link here.