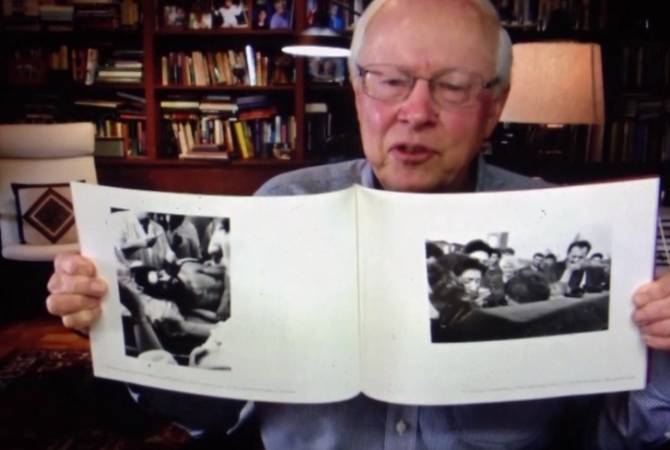 Donald Miller: Azerbaijanis were celebrating the fact that the earthquake occurred in Armenia

Donald Miller, Professor of Religion and Director of the Center for Religion and Civic Culture at the University of Southern California, who has visited and conducted research works in Artsakh during the war along with his spouse Lorna Touryan Miller, Director of the Office for Creative Connections at All Saints Church in Pasadena, California, had an exhibition of pictures taken in Artsakh and Armenia, in the Senate Rotunda, in Washington DC.

Dr Miller notes that he has received a surprisingly great number of responses related to the catalogue of photos shown in the exhibition and, as he says, in general, were not formal letters but hand-written intimate notes by the Members of Congress.
He has co-authored a book named “Armenia: Portraits of Survival and Hope” which documents both in words and pictures the lives of Armenians and the pan-Armenian struggle in the last three decades. The authors have travelled in Armenia and Artsakh during and prior to the independence of the two Armenian Republics, becoming eyewitnesses of both the devastating Spitak Earthquake and the National Liberation Movement of Artsakh in 1988. The Millers give first-hand testimonies based on interviews with nearly 300 Armenians on the social, economic and spiritual circumstances of the Armenian people living in Artsakh and Armenia, characterizing their spirit after facing an earthquake, pogroms, and war.

Recalling those days, Dr Miller shows us some pictures from Karabakh printed at a catalogue, saying: “You see, several pictures here of soldiers that were injured in the war, and were brought back to the military hospital in Stepanakert and one of the things that really touched me personally was that as helicopters came in, bringing the wounded, there would be women who would be waiting there to see if their husbands were one of the soldiers that were returning”.
The eyewitness to the earthquake and the Artsakh liberation war remembers that he was feeling heart-wretched by the fact that Azerbaijanis celebrated the fact that the earthquake occurred in Armenia.

“I remember being very struck by particularly those living in Artsakh. It was more than just the geography – there was a sense which the soul of the Armenian people resided there, and they were not just fighting a war, they were fighting for their destiny, and when I returned a few years ago to Artsakh- it was an unbelievably different place. I’m just delighted that it’s been able to prosper in a way that it has”,- concluded Dr Miller.