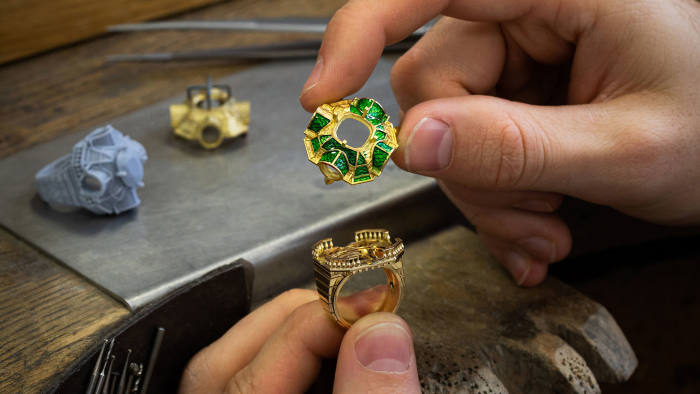 The new masterpieces of maximalism

There’s a maximal new mood in the world of high jewellery. In a dramatic turnaround from the skinny, flat, low-key geometric rings of the past decade, the pictorial-architectural statement rings on offer this spring are a glamorous, extroverted alternative. From towering Russian onion-domes made of faceted pearls, to a gold-sculptured model of the Colosseum, these one-of-a-kind objects of art and intrigue represent the very best of imaginative design and craftsmanship — the jewellery equivalent of haute couture.

The rings in Chaumet’s 16-piece Trésors d’Ailleurs collection were launched last week to complement the reopening of its historic Paris flagship in the Place Vendôme. They are quite literally monumental: each intricately modelled to represent a monument or building iconic to each of four cultures — French, Chinese, Japanese, Middle Eastern — that have shaped Chaumet’s 240-year history as jewellers to royalty and nobility. The styles draw on medieval ceremonial Jewish marriage rings, which featured an intricate model of a house or temple presumed to signify the newlyweds’ home. With their rebellious flamboyance, they are a distinct departure from Chaumet’s usual understated, abstract look.

“In the boutique as in the rings, everywhere we have created narratives,” says Chaumet chief executive Jean-Marc Mansvelt. “Our clients are looking for jewels that are more significant, with more substance and more depth.”

Chaumet isn’t the only one casting off the shackles of minimalism. For one of his signature whimsical rings, London jeweller Theo Fennell collaborated with micro-sculptor Willard Wigan to recreate in miniature the grandeur of the Colosseum. A rock crystal dome opens to reveal a gladiator lying, slain, in the sand of the arena, modelled in microscopic detail. The ring comes with an opulently bejewelled magnifying glass pendant, both encased in a wood and shagreen box modelled on the Pantheon.

Annoushka Ducas, creative director of British fine jeweller Annoushka, has collaborated with Hong Kong-based designer-jeweller Austy Lee on four theatrical rings, telling the story of Ducas’s own background and her mother’s Russian origins. Each is inspired by and named for one of four Russian cities: St Petersburg, Moscow, Kazan and Sochi. Complex and colourful, they feature distinctive Russian onion-domes formed of pearls lavished with gems — and accented with hardstones, such as onyx and lapis lazuli. Ducas says the colour schemes evoke the skies and landscapes she remembers from train journeys with her mother.

The maximalist mood is also trickling down to fine jewellery. “The current mood in jewellery is definitely ‘more is more’,” says Elizabeth von der Goltz, global buying director of Net-a-Porter. “We have seen a huge rise in chunky chains and stacking — both necklaces and bracelets, even anklets.”

Back in the Place Vendôme, Boucheron finds inspiration for its own series of knockout knuckle-duster rings in Paris architecture. There are rings designed as stylised columns of the Palais Royal gardens, the shape of Place Vendôme, and most impressively, an interpretation of the original stairs that now lead up to the residential apartment of its 26 Place Vendôme flagship, featuring a central single diamond framed in dazzling steps of black onyx, white cacholong and rock crystal.

The most famous, fantastical and maximalist of architectural rings come from the Turkish goldsmith Sevan Bicakci. In Istanbul, a gemstone’s throw from the Grand Bazaar, he and his team of specialised artisans create one-of-a-kind rings of awe-inspiring complexity and ingenuity. Massive domes of rock crystal, emerald or amethyst are intricately carved and painted in reverse, with minutely detailed, holographic images of the monuments, mosques and minarets of Istanbul. The miniature tableaux of the Hagia Sophia and Topkapi appear to float dream-like inside their crystal globes.

It is as if Instagram images and snapshot photographs, our memories and dreams, have been crystallised, made even more precious in these maximalist masterpieces.