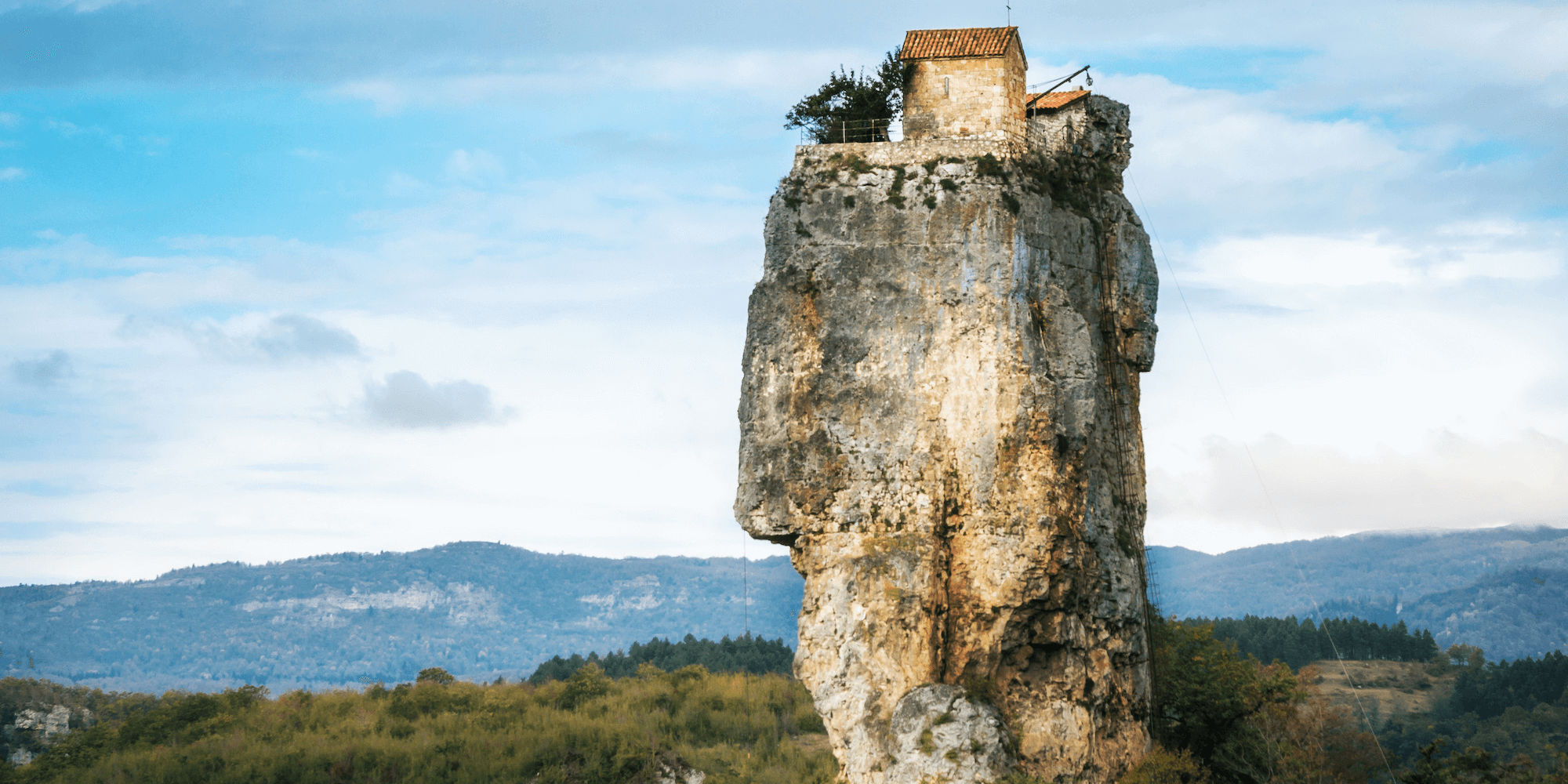 Ancient religious sites can be found across the world in the most remote, hard-to-reach places.
For centuries, places of worship have been built on cliffs, mountaintops, and islands – and we’ve tracked down the most spectacular ones.
From Buddhist temples to ancient Christian monasteries, these photos reveal some of the most remarkable and remote places of worship.
Visit Insider’s homepage for more stories.

Religious sites have long been situated in remote landscapes, away from the distractions of secular life.

Monasteries and temples dating as far back as the 4th century still exist atop mountains, cliffs, and secluded islands. Some are located thousands of feet in the air, and many are almost impossible to reach.

Here are some of the most breathtaking and remote religious sites in the world, and what they look like now.

The Taung Kalat Monastery is located in Mynamar and situated on top of a volcanic plug rising 2,417 feet above sea level.

This Buddhist monastery sits about 30 miles southeast of the ancient city Bagan, and can only be reached by climbing 777 steps.

Perhaps the most isolated church in the world, the Church of St. Maximus is located on top of a rock pillar, and accessible only by climbing a steel ladder 130 feet into the air.

Katskhi pillar, where the Church of St. Maximus is perched.

The solitary church is located in the tiny village of Katskhi, in a remote region of western Georgia.

The Sumela Monastery is a Greek Orthodox monastery, located on the Mela Mountain in Turkey.

This monastery was built as a dedication to the Virgin Mary in the 4th century and is considered one of the oldest Christian monasteries in the world.

Built into the side of a steep cliff, the Sumela Monastery is nearly 4,000 feet high.

The Hanging Temple is located in the Shanxi Province of China, and built within the side of the Hengshan mountain.

The temple is home to three religions: Confucianism, Taoism, and Buddhism, and is thought to have been built between the years 386 and 534 A.D.

The Holy Trinity Monastery is one of 24 Meteora (meaning “suspended in the air”) monasteries in Greece.

It’s over six centuries old and stands over 1,300 feet off the ground.

The Paro Taktsang Monastery is a Buddhist temple located in the Paro Valley of Bhutan.

The temple complex is only accessible by climbing mountainous paths, and is situated on the side of a cliff, over 10,000 feet above sea level.

The Mar Saba Monastery is a Christian monastery located in the remote Kidron Valley between Jerusalem and the Dead Sea.

A picture taken on September 28, 2019 shows a view of the Greek Orthodox monastery of St Sabbas, also known as Mar Saba, overlooking the Kidron Valley in the West Bank south of the biblical town of Bethlehem.

It was founded in the year 483 A.D., and is considered one of the oldest active monasteries in the world.

Santa Maria de Montserrat is a Christian monastery located in a mountainous region of Catalonia, about 38 miles from Barcelona.

This monastery stands about 2,400 feet above the ground, and was originally founded by mountain-residing hermits.

The Eremo di San Colombano monastery is built directly into a cliff, near the Italian town of Rovereto. This monastery was built sometime between the 10th and 14th centuries, and can only be accessed through a set of stairs carved into the cliffside.

The Monastery of Saint Dionysius is located in the beautiful Athos peninsula of Greece. It was built directly onto a secluded coastal rock in the year 1366.

The Ostrog Monastery in Montenegro is one of the three most visited Christian sites in the world.

It’s positioned vertically within a remote mountainous cliffside of the Bjelopavlic plain. But its location doesn’t prevent visitors. Each year, this monastery is visited by more than 100,000 religious pilgrims.

This remote island in Montenegro was originally the home of a Romanesque church dating back to 1166, but its structure was destroyed by natural causes and conquests in the 1600s. Today, a more modest church, along with a cemetery, exists on this small stretch of land.

The Key Monastery is a Tibetan Buddhist place of worship located in the Spiti Valley of India. It is thought to have been built in the 11th century and rests on a hilltop over 13,000 feet above sea level.

The Monastery of Hozoviotissa is the second oldest monastery in Greece, built in 1017. The Christian monastery hangs brightly off of a cliffside, 984 feet above the Aegean Sea.

The Phugtal Monastery is a Buddhist monastery located in northern India. The monastery was founded in the early 12th century, and remains one of the most isolated places of worship in the region.

Situated at the entrance of a natural cave on a cliff, the Phugtal Monastery can be reached only by foot.

Mont St. Michael is situated on a picturesque rocky Island between Normandy and Brittany in France.

A picture taken on September 02, 2019 shows the Mont-Saint-Michel, northwestern France.

This Gothic-style Benedictine church was built between the 11th and 16th century, and because of its vast beauty and isolated nature, it’s considered a UNESCO World Heritage Site.

The Tatev Monastery is among the oldest and most famous religious sites in Armenia. The monastery complex was built in the 9th century, and during Medieval times, it served as a vital centre for shaping the country’s spiritual and educational growth.

The 600-year-old Blagaj Tekija monastery is located on the base of a remote cliff and near the river Buna, in Bosnia.

This monastery was first established during the Ottamon Empire. However, due to vigilant upkeep, the religious site still looks almost exactly like it did in the past.

The Santuario Madonna della Corona is situated on a remote cliff in Italy.

The church was built in 1530, and originally the area only permitted holy men to come and reflect on their faith in silence, away from the rest of the world. Today, the church is open to visitors, but remains only accessible through a mountainous path.

The Ypapanti Monastery is another religious site within the Greek Meteora complex, and was originally established in 1367.

Meteora, Greece – June 6 2017: Ypapanti Monastery is one of the lesser known monasteries of the Meteora region. It is built into a cliff face and not open to the public.

This hidden monastery was built inside of a large rock cavity, unlike the majority of other Meteora sites, which tend to sit atop hills.

Sevanavank is a Christian monastery complex in Armenia, which sits on the peninsula of Lake Sevan.

ShutterstockSevanavank monastic complex in Armenia, at sunset, on the background of the Sevan lake.

This complex dates back to the 4th century, and is one of the first places where Christianity began to spread throughout the country. This site remains one of Armenia’s most visited attractions for its arresting beauty and solitary location.