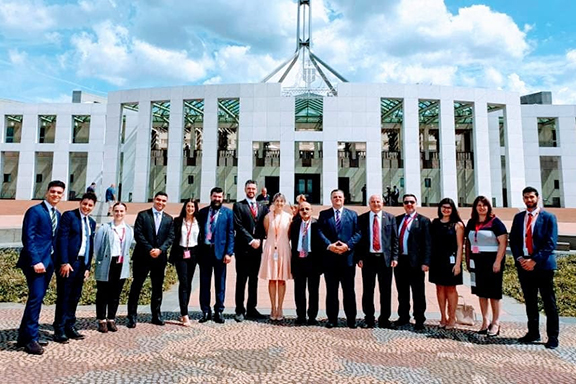 CANBERRA, Australia—The peak advocacy bodies of Australia’s Armenian, Assyrian, and Greek communities have signed a Memorandum of Understanding to launch the “Joint Justice Initiative” at a Cultural Cocktail event. The event was held on Tuesday, February 25 at the Australian Parliament House’s Mural Hall.

Around 100 Federal Australian parliamentarians, diplomats, departmental officials, political staffers, academics, media, and community leaders were treated to cultural performances, food, wine and brandy, as well as the historic signing which affirmed that the public affairs representatives of the three communities were jointly committed to seeing Australia recognize the Turkish-committed Genocide against the Armenian, Greek, and Assyrian citizens of the Ottoman Empire during World War I.

The Joint Justice Initiative’s Memorandum of Understanding stipulates that the Armenian National Committee of Australia, the Assyrian Universal Alliance – Australia Chapter and the Australian Hellenic Council “shall continue and expand their cooperation and joint advocacy for the international affirmation and justice for the Genocides of the indigenous Armenian, Assyrian, and Greek populations of the Ottoman Empire perpetrated by the Ottoman Turkish government.”

Further, the document confirms the communities participating in the Joint Justice Initiative “shall jointly advocate against any attempt by the Turkish Government to use the sacred ANZAC graves in Gallipoli (and access by Australians to those graves and memorials) as ‘hostages’ or bargaining chips in coercing or persuading the Australian Government in being complicit in the Turkish State’s denial campaign with respect to the Armenian, Assyrian, and Greek Genocides.”

Haig Kayserian of the Armenian National Committee of Australia spoke on behalf of the Joint Justice Initiative, stating that the three communities – who are made up of descendants of survivors of the Ottoman Turkish Genocide of Armenians, Assyrians and Greeks during WWI – consider this a significant step towards the realization of their collective goals.

“The launch of the Joint Justice Initiative and our signing of this Memorandum of Understanding signals our commitment to redouble our joint efforts to ensure Australia is a party of truth and justice when it comes to the Armenian, Assyrian, and Greek Genocide,” he said.

“In recent years, Australia’s Parliament has seen dozens of speakers declare support for Federal recognition of the Genocide committed against our ancestors, and we believe it is past time that Canberra gives up the word games it plays on this issue in the name of a false diplomacy against a bullying foreign dictatorship.”

The Assyrian Universal Alliance – Australia Chapter’s Deputy Secretary General Hermiz Shahen declared: “Denial is the continuation of genocide, and Australia’s inaction in recognizing and condemning means we are failing the very values our country was built on.”

“It was Australians who came to the aid of Armenian, Assyrian and Greek victims of the genocide over 100 years ago, while our ANZACs witnessed the barbarity suffered by the Christian minorities deliberately targeted by the Ottoman government, and it should be in the spirit of those Australians that our political leaders stand up for what is right,” Shahen added.

The Australian Hellenic Council’s George Vellis declared: “It is time Australia stands up for human rights, truth and justice, and the Armenian-Australian, Assyrian-Australian, and Greek-Australian communities have today declared that this is an absolute priority for the country’s lawmakers and government.”

The Joint Justice Initiative invited Members of Parliament and Senators to sign a pledge that declares their support for Australia’s recognition of the Armenian, Assyrian and Greek Genocides, and event hosts Members of Parliament Trent Zimmerman and Joel Fitzgibbon addressed the audience as co-conveners of the Armenia-Australia Interparliamentary Union stressing their backing.

Professor Peter Stanley, who is the former Director of the Australian War Memorial and co-author of Australia, Armenia & the Great War, spoke to press the importance of Australia’s recognition of the Genocide committed against the Armenians, Assyrians and Greeks of the Ottoman Empire.

The Joint Justice Initiative’s Memorandum of Understanding text in full is available below.

ON COOPERATION BETWEEN THE ARMENIAN NATIONAL COMMITTEE OF AUSTRALIA, THE ASSYRIAN UNIVERSAL ALLIANCE, AND THE AUSTRALIAN HELLENIC COUNCIL

A. Recognizing the historical and friendly relations between the Armenian, Assyrian and Hellenic (Greek) Nations;

B. Attaching paramount importance to the friendly relations, mutual understanding, strong solidarity, and continued close cooperation between the Armenian-Australian, Assyrian-Australian and Hellenic-Australian Communities;

C. Convinced that the cooperation and mutual ties between the three Communities should further deepen and strengthen;

DO HEREBY AGREE ON THE FOLLOWING: