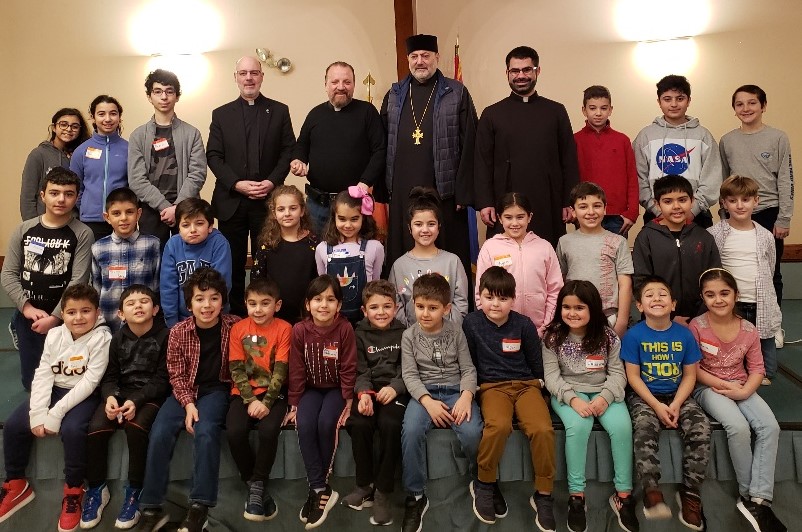 PROVIDENCE, RI—The Armenian Martyrs’ Memorial Committee of RI (AMMC-RI) hosted a memorable and fun-filled 22nd Youth Day on Monday, February 17. About 30 youngsters between the ages of seven and fourteen participated in the annual event which was held during the February school vacation week this year. In addition to the theme of Vartanantz, the program was dedicated to the Holy Martyrs and survivors of the Armenian Genocide. Following a blessing offered by Rev. Fr. Shnork Souin of Sts. Sahag & Mesrob Church, the group recited the Lord’s Prayer (Hayr Mer) in Armenian and English.
Weekly editor Pauline Getzoyan conducted the first session of the day which traditionally is devoted to a subject associated with genocide education. This year’s focus was the significance of flags and particularly tricolor flags, their symbolism, and ultimately the colors of the Armenian flag and their meaning. The children also learned about the history of the flag design and its connection to the First Republic of Armenia and its establishment following the Genocide. At the conclusion of the session, the children created their own flag designs for their schools.
As is customary, an arts and crafts class with Hasmig Phillips and Janet Houser had the children painting and decorating shields symbolizing the battle of Avarayr. The fun continued in the kitchen with Sylvia Simonian, Gloria Nahabedian and Shoghig Tavitian who taught the children to make lavash and apricot and walnut roll-ups. A highlight of the day was the ever-popular music session which this year was conducted by Raffi Rachdouni who taught the children songs appropriate for Vartanantz day.
Rhode Island clergy Rev. Fr. Kapriel Nazarian of Sts. Vartanantz Church, Rev. Fr. Shnork Souin of Sts. Sahag and Mesrob Church and retired pastor of the Armenian Evangelical Church Rev. Hagop Manjelikian conducted a variety of lessons focused on the theme of the day. In addition, Deacon Hagop Ghajanian offered a lesson on St. Vartan and the Battle of Avarayr and provided a fact sheet for the children.
In addition to sessions for the younger participants, there were presentations devoted to the older students. Newly ordained Deacon Shant Eghian shared his experiences at the Summer Youth Academy in Antelias, Lebanon last summer with a beautiful PowerPoint presentation featuring photos from the trip. Armenian National Committee representatives Steve Mesrobian and George Mangalo discussed the Genocide and United States politics focusing on the passage of the Armenian Genocide resolutions in both the House and Senate. Supplementing their presentation, Getzoyan provided the students with packets from the Genocide Education Project that included materials intended to promote Armenian Genocide education in their classrooms. The students were encouraged to share the materials with their teachers and to inform them about the passage of the resolutions in Congress last year.
By the end of the day, it was evident that all the participants enjoyed their time at Youth Day with an eye toward next year’s adventure.