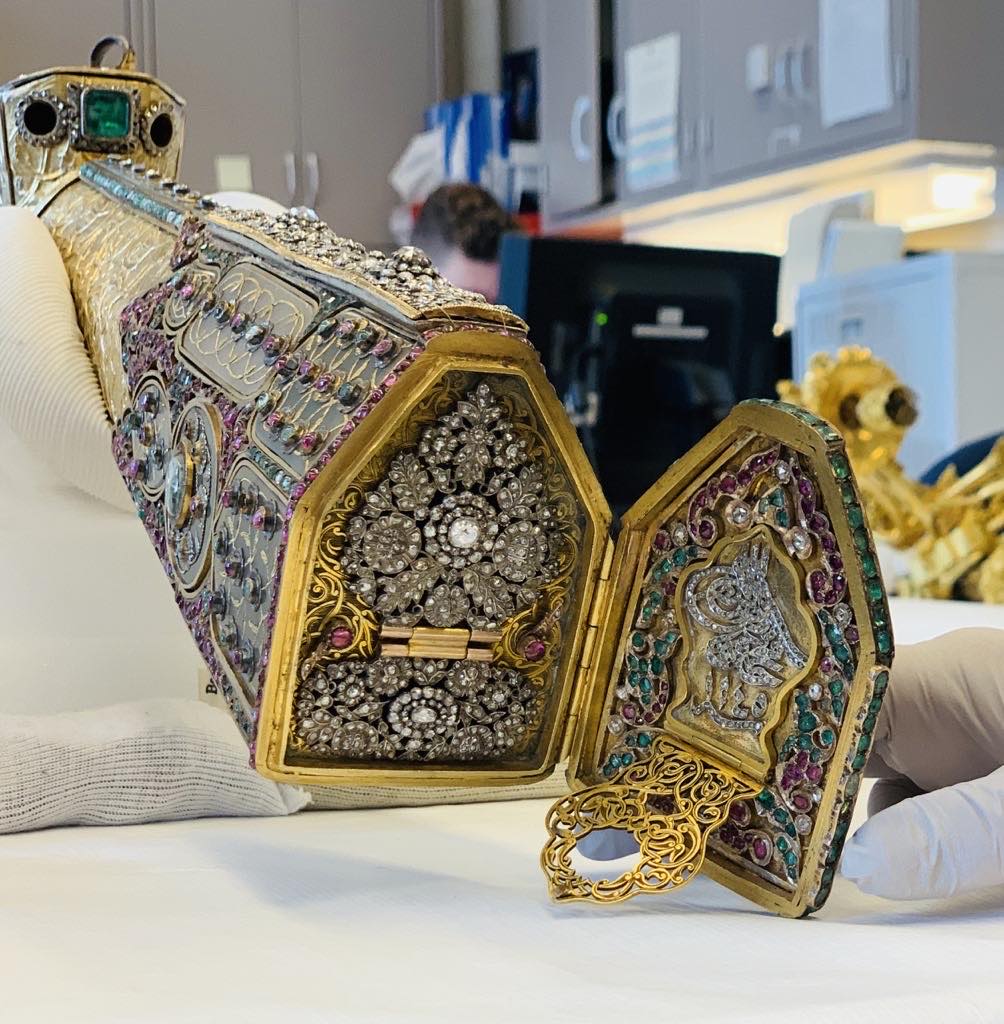 BALTIMORE, Md.—The National Museum of Armenian Ethnography and the History of the Liberation Struggle (Araks, Armenia) has announced that the 18th century Jeweled Gun of Sultan Mahmud I—a stunning artifact held in the collection of the Walters Art Museum was recently given a new label that now attributes its remarkable jeweling to the Armenian Christian, Hovhannes Agha Duzian.
“The Walters is incredibly fortunate to have this stunning and historic object as one of the highlights of our collection,” said Julia Marciari-Alexander, the Andrea B. and John H. Laporte Director of the Walters Art Museum.
The 55 inch-long (139.7 cm) gun—crafted in 1733 and bejeweled with countless diamonds, rubies, emeralds and other gemstones—has garnered international scholarly interest and as a result has been the subject of ongoing research. During a week-long exploration of the piece and an intensive study of its archival history, the crucial Armenian contribution to the gun’s manufacture took center stage.
At the request of counsel to the National Museum Karnig Kerkonian of Kerkonian Dajani LLC and upon the invitation of Marciari-Alexander, experts Dr. Ashley Dimmig, the Wieler-Mellon Postdoctoral Curatorial Fellow in Islamic Art at the Walters, and Prof. Dr. Levon Chookaszian, the Chair of Armenian Art History and Theory at Yerevan State University, joined Walters’ museum curators and archivists for a meticulous, week-long inspection of the treasured gun on location in Baltimore.
At the conclusion of this collaborative exploration, it was determined that the label of the artifact should be revised to reflect the valuable contribution of the Armenian Christian, Hovhannes Agha Duzian.
Duzian served as the Chief Goldsmith under Sultan Mahmud’s predecessor Ahmed III and continued to work in that esteemed position for Mahmud I. It was while serving as the Chief Goldsmith to the Ottoman court that Duzian created the gun’s most striking feature: its astonishingly ornate jeweling.
Prof. Dr. Chookaszian remarked that “the artifact itself constitutes a valuable component of the rich and storied history of Armenian art and, indeed, of Armenian civilization” and commended this collaborative undertaking with the Walters “as an example of a sophisticated, exemplary approach to understanding and uncovering the depth and breadth of the Armenian contribution to the art of the era.”
Marciari-Alexander added that “our staff is honored to have had the opportunity to work closely with Prof. Dr. Chookaszian to restore the attribution of the gun’s remarkable jeweling to Hovhannes Agha Duzian.”
The two museums have also expressed an interest in further collaboration and exchanges. The new label and a full description of the Jeweled Gun of Sultan Mahmud I may be found on the Walters Art Museum website.
Guest Contributor