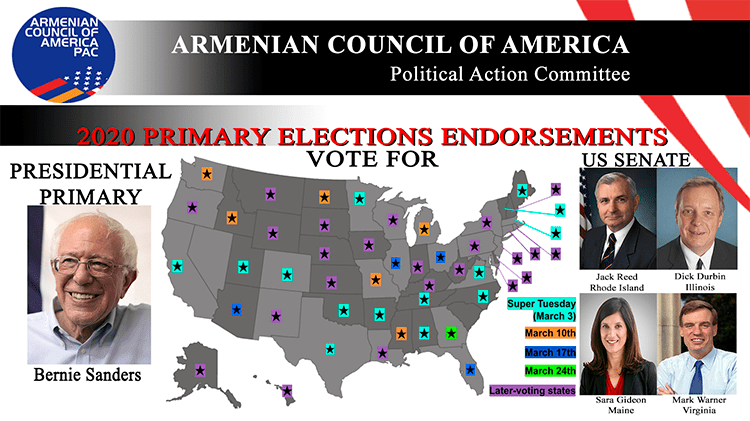 PASADENA, CA – The Armenian Council of America – Political Action Committee (ACA-PAC) is proud to announce its endorsement of Senator Bernie Sanders for the 2020 Democratic Presidential primary.

Senator Sanders’ consistent track record of championing human rights issues, advocating for civil liberties and his unwavering support of legislation related to Armenian American issues, is testament to the leadership qualities essential to the role of President of the United States. His proven record on supporting pro-Armenian legislation includes, voting for an increase in US aid to Armenia, the official recognition of the Armenian Genocide in the US Senate and voting for restrictions and limitations on US aid to Turkey and Azerbaijan, for their rampant human rights violations and illegal destruction of ancient Armenian UNESCO sites.

ACA-PAC believes that Senator Sanders is the only presidential candidate that will stand up to the establishment, which for far too long, has utilized offensive terms such as “medz yeghern, massacre and great tragedy” all while avoiding usage of the proper term “genocide” during the annual presidential address to the nation, insulting the memory of the 1.5 million men, women and children who were systematically murdered during the Armenian Genocide of 1915.

Other notable candidates ACA-PAC has endorsed are Armenian Americans Sara Gideon, a dedicated public servant running for the Democratic nomination of Maine’s U.S. Senate seat, and Dan Janjigian, who represented Armenia at the 2002 Winter Olympics, is now running for Democratic nomination of the U.S. House to represent Texas’ 31st Congressional District.

ACA-PAC urges all Armenian Americans to head to the polls and cast their ballot for Senator Bernie Sanders and other ACA-PAC endorsed candidates.