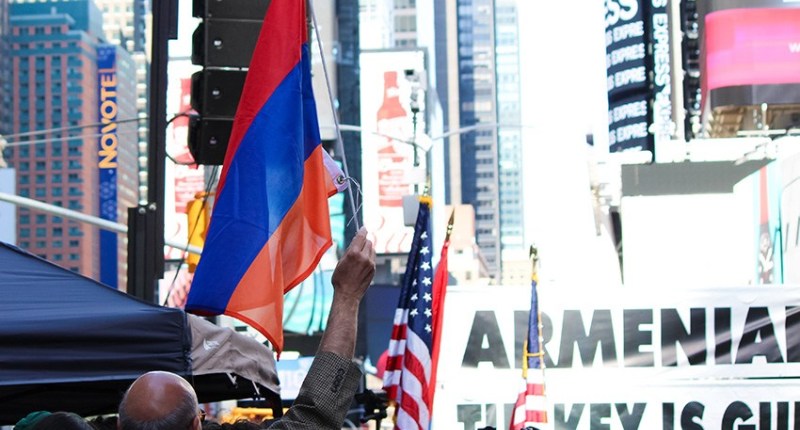 NEW YORK, NY – The 105th anniversary of the Armenian Genocide will take place at the center of the universe in Times Square, New York, on Sunday, April 26, 2020 from 2:00 pm – 4:00 pm. Join thousands in solidarity alongside noted politicians, academics and artists to honor the victims of the Armenian Genocide while advancing the fight towards global recognition. Special accolades will be given to the U.S. Congress and Senate for standing on the right side of history and approving measures formally recognizing the Armenian Genocide.

While over a century has passed since the first genocide of the 20th century that claimed the lives of 1.5 million Armenian martyrs by the Young Turk Party of the Ottoman Empire, the Armenian Diaspora continues its unyielding efforts to remember, to honor and to educate the world about this catastrophic event in history — a piece of history that goes unrecognized to this day by the Turkish government.

Cultural aspects of the program will be presented by members of the Armenian homeland as well as the Diaspora. Students from the Sipan Armenian School of Paramus, NJ, will sing the Armenian and American anthems. The commemoration will be led by the masters of ceremonies Armen McOmber, Esq. and Nvair Beyerian.

In conjunction with the Times Square Commemoration, the Knights & Daughters of Vartan sponsor an annual global essay contest and Young Professionals event, 100 Years & Beyond, for the New York metro area.

Founded in 1985 by the late Sam Azadian, a former Brooklyn, New York resident, who lost four siblings during the Armenian Genocide, the Armenian Genocide Commemoration at Times Square has honored the 1.5+ million Armenian lives lost during the horrific events of the 1915 Genocide of the Armenians by the Young Turk Government of the Ottoman Empire. This internationally-recognized annual event, that is free and open to the public, draws thousands of Armenians and non-Armenian participants to commemorate the solemn occasion. The event features speeches and tributes delivered by prominent political figures and civic leaders, officials of the Knights and Daughters of Vartan, representatives of major Armenian-American organizations, and distinguished scholars and educators as well as high-ranking Armenian and non-Armenian clergy.