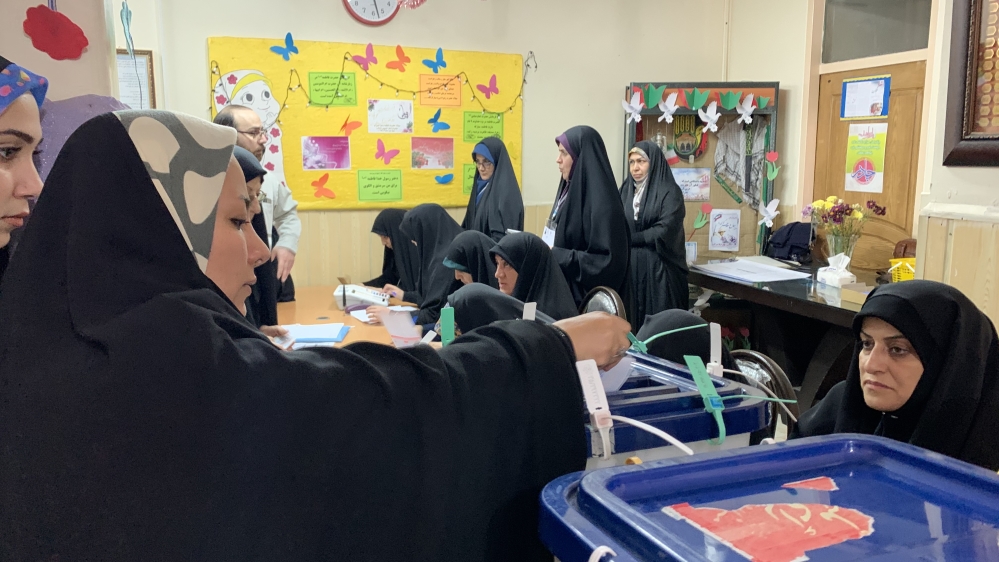 Tehran, Iran – Iranians are voting in their country’s eleventh parliamentary election, seen as a test for the popularity of President Hassan Rouhani’s reformist-moderate camp, as hardliners are expected to make gains.

Elections for Iran’s 290-member Parliament are set amid escalating political tensions, economic struggles and concerns of low participation. The spectre of the coronavirus infection that has killed two people also adds another layer of uncertainty to the electoral process.

Supreme Leader Ali Hosseini Khamenei cast his vote in the capital, Tehran, minutes after the polls opened on Friday at 8am local time (04:30 GMT).

In a speech after he cast his vote, Khamenei reiterated calls for a higher voter turnout, telling Iranians to participate in the elections “if they were interested in the country’s national interests”.

Voters on Friday will also choose replacements for seven deceased members of the Assembly of Experts, a clerical body responsible for appointing the Supreme Leader.

Nearly 58 million people are eligible to vote on pre-selected lists of candidates that represent more than 250 registered parties. All voters must be more than 18 years of age. Almost three million are first-time voters.

A total of 55,000 polling stations have been set up at mosques throughout the country. More than 7,000 candidates, including 666 women, are competing.

Long queues could be seen at the main polling station set up at Masjid al-Nabi, the main mosque in the middle-class Narmak neighbourhood where former President Mahmoud Ahmadinejad lives.

A spokesman for the Guardian Council, Abbas Ali Kadkhodaei, said in a statement that 200,000 supervisors from the council were overseeing the polls throughout the country.

Polls are expected to close at 6pm (14:30 GMT) but can be extended. During the previous parliamentary elections in 2016, voting was extended due to a high turnout.

Also known as the Majlis, Iran’s Parliament is responsible for passing legislation in the country, approving the annual budget and ratifying international agreements and treaties.

All legislation passed by the Majlis is then approved by the Guardian Council and the President.

The Parliament has a limited say in foreign affairs, although it played a crucial role in some of the country’s pivotal moments, including in 2015 when it approved the nuclear deal with world powers. The Majlis plays a bigger role in economic and other domestic politics.

The vote also sets the tone for next year’s presidential elections.

“This vote is very important for our nation and its national interests against our enemies in the EU – France, the UK and Germany – as well as the United States,” Ali Javanrodi, a 35-year-old civil servant, said.

“I am voting for candidates who will resist our enemies and unite our nation,” he told Al Jazeera.

This vote will ‘send a clear and strong message that we are one and can respond to any attacks,’ Ali Javanrodi said [Arwa Ibrahim]

The vote is key as it is the first parliamentary election since the US withdrew from the nuclear deal between Iran and world powers in 2018, and reimposed sanctions against Tehran, including on its oil and banking sectors.

The financial measures put Iran’s economy into a tailspin with inflation reaching 33.5 percent.

In addition to the deteriorating economy, the vote comes after a series of national crises including a deadly crackdown by security forces on tens of thousands of people protesting against fuel price rises in November and the military’s shooting down of a Ukrainian airliner on January 8 that killed all 176 people on board, mostly Iranians.

According to Tehran-based political commentator and analyst Mohammad Eslami, the vote will “reflect the way people want the government to approach the West after the breakdown of the deal.

“It will tell whether people want more cooperation with West, or with Russia, China and tapping into domestic potentials instead,” he told Al Jazeera.

Zahra Khalaf, 30, an alternative medicine practitioner, said: “Voting was an easy and smooth process like it always is.”

“It’s important to vote because we can choose members of our Parliament who are responsible for questioning the ministers,” she told Al Jazeera.

“Ultimately, I want a Parliament that will work for the well-being of our people and bettering our economy.”

While for many voters, the most important issue in the election is the economy, many also saw the vote as a national duty amid rising tensions with the US and other international powers.

Ahmad Torkashavan, 55, a former Revolutionary Guard Corps (IRGC) soldier who participated in the Iran-Iraq war at the age of 14 and then joined the Revolutionary Guard afterwards, said: “I feel it is a national duty to [vote], despite the difficult economic conditions that have discouraged some people”.

Tahereh Dervishi, 68, agrees: “Voting is a national and religious duty.

“I voted for my country and our martyrs including Qassem Soleimani. We need a stronger parliament to fight our enemies, the US and Israel,” she added.

The elections come after the Iranian General Qassem Soleimani, former leader of the International Revolutionary Guard Corps (IRGC) was assassinated by US airstrike near Baghdad airport in on January 3.

Parliamentary candidates in Iran are usually aligned with reformists or conservatives as the two main political currents.

But this time, the election will likely be a competition between conservatives supporting Tehran’s former mayor Mohammad Bagher Ghalibaf, who backed the 2015 nuclear deal and ultra-conservatives who rejected it.

All ballots are counted manually, delaying official results for up to two or three days after the vote.

Surveys in the run-up to the vote indicated a potentially lower voter attendance than at previous parliamentary polls four years ago.

Sitting at a park in Tehran, Mohamed Feli, 31, sipped a cup of tea and chatted with his friends. He told Al Jazeera he had no intention to vote.

“I won’t be voting because the elections in Iran are useless. They make no difference and aren’t even free and fair,” he said. “We don’t want this regime anymore.”

Ahead of the vote, observers said people may change their mind at the end of the day.

“Iranians tend to decide on the day whether or not they will vote. So many people may actually end up at the ballot boxes,” Fatima al-Samadi, a senior researcher at the Al Jazeera Center for Studies, said in the run-up to the vote.

A few hours into the vote, Rouhani’s chief of staff Mahmoud Vaezi told reporters on Friday that based on reports coming from different cities and provinces, participation so far has good, or even higher than in the 2016 parliamentary election.

On the eve of the election, the US imposed sanctions on five senior Iranian officials, for allegedly preventing fair and free elections in Iran, the US Treasury Department said on Thursday.

Treasury officials said that the officials had used their power to disqualify candidates from competing in elections.

The council, which is in charge of vetting candidates ahead of the vote, disqualified more than 7000 hopeful, most of whom were reformists. Rouhani criticised the Council for disqualifying scores of his moderates and reformists camp, while many Iranians also said they would boycott of the vote because of the move.

The sanctions block any assets the officials have within US jurisdictions, prohibit US based companies and individuals from transacting with them, and expose anyone conducting business with them to potential penalties.