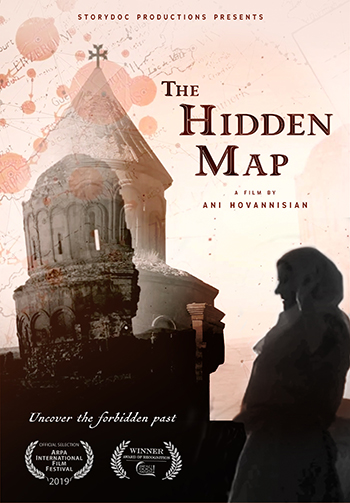 Filmmaker Ani Hovannisian’s documentary “The Hidden Map” will be featured at the first-ever POMontreal Film Festival. Organized by Hamazkayin Montreal and the popular Pomegranate Film Festival with roots in Toronto, POMontreal has handpicked 13 acclaimed films to kick off its inaugural festival. The festival will be held from February 28 to March 1.

The vibrant Armenian community of Montreal has been eagerly awaiting the opportunity to gather under one roof to experience the cultural wealth offered by Armenian filmmakers from around the world. With the leadership of Hamazkayin Montreal’s President Tamar Chahinian, Pomegranate’s Sevag Yeghoyan, and their dedicated teams, an eventful weekend of films, camaraderie, and a red-carpet gala have been planned.

Over the span of her professional career as a broadcast journalist, Ani Hovannisian has produced and directed hundreds of inspiring true stories for television and other international audiences. Most recently, after four journeys deep into Historic Western Armenia, two with her father, Professor Richard Hovannisian, she has just completed her first feature documentary.

“The Hidden Map” depicts the gripping encounters of an American-Armenian traveling through Turkey in search of her forbidden ancestral home and a solitary Scottish explorer, Steven Sim, she meets along the way. He, it turns out, has been documenting the relics of the lost Armenian past for 30 years. Though Sim has always traveled alone, almost invisibly, he agrees to set out with the Armenian. Together, the duo digs beneath the surface of modern-day Turkey, discovering lonely relics, silenced voices, and stories of an ominous past, unearthing buried secrets and the hidden map.

Active in the American-Armenian community since her youth, Hovannisian was an anchor and reporter at TeleNayiri and Horizon Armenian Television in Los Angeles for more than a decade. She has traveled to present-day Armenia since childhood, and seven years ago, rooted in the stories of her genocide-survivor grandparents and their entire generation, and shaped by the lifelong dedication of her own parents, Ani embarked on the first of several journeys into the historic Armenian homeland, where she continues to document living history through the stories of the land and people.

“The Hidden Map” will be featured at the POMontreal Film Festival at Pastermadjian Hall, L’Ecole Armenienne Sourp Hagop in Montreal on Sunday, March 1 at 2 p.m., followed by a discussion with the filmmaker. Festival information and tickets are available online.