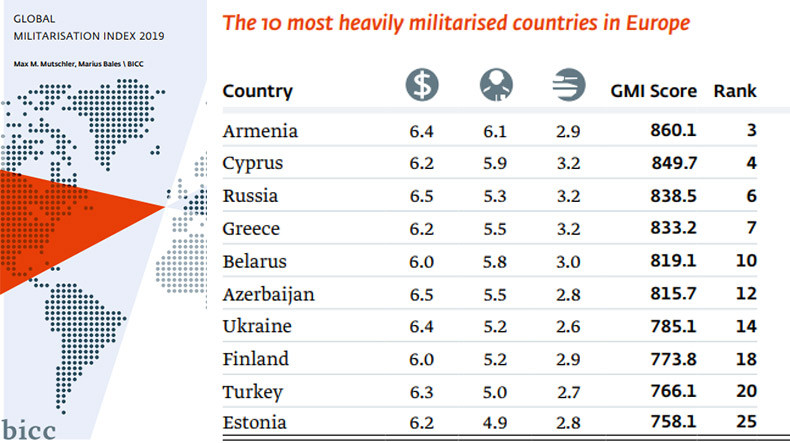 The GMI 2019, which covers 154 states and is based on the latest available figures, mainly reports an increase in military activity, military spending and the number of conflicts worldwide.

As in previous years, Israel is again the most heavily militarized country in the world. With a population of around nine million, Israel maintains – through its military service system, with 169,500 soldiers and 465,000 reservists – a comparatively very large military, for which it spent more than $15 billion in 2018.

“In the South Caucasus, militarization continues at a very high level. A crucial factor here is the unresolved secessionist conflict between Armenia and Azerbaijan over the Nagorno-Karabakh region,” the report said. “Both Baku and Yerevan are currently modernizing the old army and air force weapons systems, for which they have awarded various large-scale contracts to Russian weapons manufacturers. The result is rising military spending on both sides.”

Russia, ranked sixth, continues to sustain one of the largest military forces in the world, the report says. It has modernized its equipment and expanded its defense technological capabilities comprehensively in the past few years. The NATO countries are again continuing their arms buildup, pointing to ongoing tensions with Russia. This is, in particular, the case in the Baltic and eastern European countries, state the authors of the report, Max M. Mutschler and Marius Bales.

The list of the most highly militarized countries in Asia is still led, as in previous years, by Singapore, while China ranks 94th on the list. The United States comes 31st and Turkey ranks 19th on the Global Militarization Index.