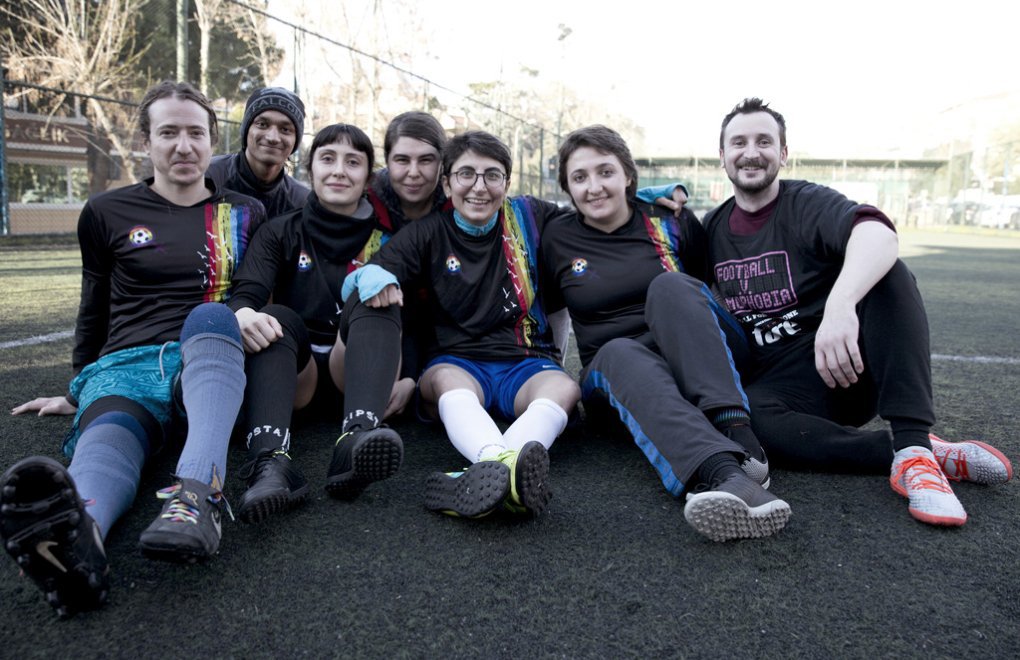 A Kick to Homophobia

According to a report by the International Lesbian, Gay, Bisexual, Trans and Intersex Association (ILGA), in 2019, Turkey was the second worst country in Europe, after Azerbaijan and before Armenia, for LGBT equality laws and policies.

February is the football against homophobia month of action and tournaments, events and conferences are currently taking place in 19 European countries. This year, the only event in Turkey has been a football game between Sicilya Demir Spor and Sportif Lezbon.

Founded by director Ayşegül Selenga Taşkent and documentary photographer Delizia Flaccavento, Sicilya Demir Spor is a mixed gender football team whose motto is “he with she”.

At the core of the initiative is the belief that sport, and especially football, can be a tool for social inclusion, a place where men and women run and have fun together while gaining confidence and an open mind. The team received the Hrant Dink Inspirations Award in 2018 for showing that sport can be a place of solidarity where everybody is equal.

Sportif Lezbon is the first openly LGBT team in Turkey. Founded by Selin Yıldız, the team makes a stand for openness and inclusivity and uses football as a tool against discrimination and homophobia.

A small grant by FARE Network, an organization which fights inequality in football and uses football as a tool for social change, allowed Sportif Lezbon to travel from Ankara, where they are based, to Sicilya Demir Spor’s football pitch in Istanbul to play a friendly game. The event was not limited to the two teams but open to anyone who loves fair play and solidarity.

Ecem was a guest player from a team called Queerpool: “I love sport but I don’t like the sexism and the sexist language far too often associated with it. For this reason I felt comfortable and happy during the game. I really liked that Sicilya Demir Spor has specific rules (no fouls, no sliding tackles, no swearing, no getting upset to teammates or opponents) to make sure that the football played on the field doesn’t leave anybody out.

“Far too many times I have witnessed homophobic and sexist language at sport events. I believe change can come only with inclusive sports where people of any gender and sexual orientation play together and compete with each other as equals. Sport has a special place in my life, that’s why being part of an initiative aiming to improve the sport environment for all has been particularly important for me.”

‘I love Turkey despite its many flows’

Arman recently came back to Turkey to join the efforts for social justice after 7 years of social work experience abroad:

“We had so much fun playing against such amazing players, whose performance pushed our team and brought out some moves that I hadn’t seen them do during our weekly Sicilya Demir Spor get-togethers. What added to the fun was how everyone appreciated each other’s effort, and both sides cheered the other team when they scored a goal. The clapping and encouragements were often mixed with laughter, as we were able to find the humor in our shortcomings and moments of confusion.

“It didn’t matter how you identified on the gender spectrum (I myself am a straight man), what mattered was that you were there with the intention to play well, and allow others to play well while not taking yourself too seriously. I can only remember doing sports with 3 people who identified as LGBTQIA+ out of well over a hundred sport enthusiasts, but I am proud to say that this number has now significantly increased having played a game with Sportif Lezbon. And I have rarely had so much fun with a group of people I had never met before. I believe this is because there existed an unspoken rule that we were all there first and foremost to have fun. These are the types of events I live for.

“I love Turkey despite its many flaws, and unfortunately the position of LGBTQIA+ individuals is far from where it should be. However, Turkey has also shown great capacity to accept people who challenge gender norms, as this can be seen with famous musicians who command immense respect such as Zeki Müren and Bülent Ersoy. If this is possible in the arts, I am confident it is possible in sports. By continuing to bring people together to play and get to know each other, along with the tireless efforts of LGBTQIA+ activists pushing for social justice in countless spheres of life in Turkey, a place for everyone can be created in Turkey’s sporting world. In the meantime, I know my place is to keep playing and bringing people to the field, and to continue to be honored by the amazing goals that they score against me.”

‘I loved playing with Sportif Lezbon’

Asad was the youngest player on the field and is the living proof of the importance of growing up without any fear of the “other”.

When asked about the event, the issue of homophobia didn’t even cross his mind, he simply enjoyed the game:

“It was one of the best games I have ever had the honor to be in. I started as goalkeeper and then moved to defense. I blocked their shots and passes. Then they started coordinating better and they scored. That’s when I moved to the midfield and I started dribbling, passing and assisting goals. In the second half I pulled my left calf a bit so it became harder for me to control my body: that’s why I did three fouls, but not on purpose. Overall this was an incredible game. I loved playing with Sportif Lezbon.”

According to a report by the International Lesbian, Gay, Bisexual, Trans and Intersex Association (ILGA), in 2019 Turkey was the second worst country in Europe, after Azerbaijan and before Armenia, for LGBT equality laws and policies. The study also showed that such laws and policies are crucial for societies to advance and become more just, open and equal. A football game may be just a drop in the ocean, let it be. As Arman poignantly said:

“Events like this can make a difference in our lives, by bringing us together and focusing on supporting each other rather than beating each other, on pushing each other to improve mentally and physically instead of breaking us down and leaving us feeling weak or worthless. Does it matter who someone loves? Does it not matter more that we all live lives full of love and bring the best out of those around us?”