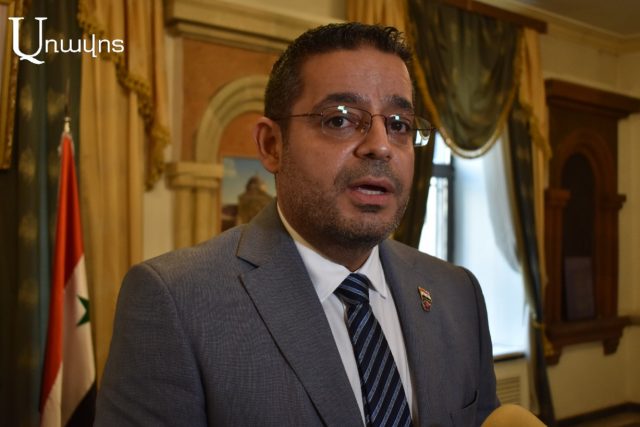 Syrian ambassador: ‘Recognizing and condemning the Armenian Genocide is a political decision, but Syria took that step a long time ago’

Ambassador Extraordinary and Plenipotentiary of the Syrian Arab Republic to Armenia Mohammed Haj Ibrahim spoke to journalists about the resolution recognizing and condemning the Armenian Genocide. “Syria is the second country after Lebanon that has recognized the Armenian Genocide in the Middle East and Arab countries. On Thursday, the People’s Council of Syria accepted a resolution that recognized and condemned the Armenian Genocide. However, it is important to note that Syria took this step a long time ago when it opened its doors to Armenian Genocide survivors and shared its wealth with them. Such a decision is considered to be a victory in history. This also pays respect to those who died at the hands of the Ottomans during the genocide. We do not have divisions between Christians and non-Christians in Syria. Syria is an Arab nation. We have different religions in all layers of our society and we regard them all equally.”

When asked about the circumstances or forces that allowed Syria to formally recognize the Armenian Genocide, the ambassador said, “I mentioned that we have already recognized it a long time ago when Syria welcomed Armenian refugees and gave them the opportunity to establish new lives there while maintaining their identity and culture. The genocide carried out by the Ottomans has been included as a subject in school textbooks. There is the Armenian Genocide Memorial Church in Deir Ez-Zor and the Hill of Armenian Genocide victims in Margate. It is also important to mention that the memory of the victims of the genocide is commemorated every year in cities where Armenians live. In 2015, the President of the People’s Council of Syria made a statement condemning the Armenian Genocide. He also participated in the 100th anniversary commemorations that took place in Yerevan and offered a flower wreath to pay his respects.”

Aravot Daily asked the ambassador what he believes the resolution to the Artsakh conflict will be and what the Syrian Arab Republic’s position on the conflict is. “Syria has always supported a peaceful resolution. It supports the Minsk Group and the work of its co-chairs. We hope that this conflict will be resolved peacefully,” Ambassador Mohammed Haj Ibrahim said.