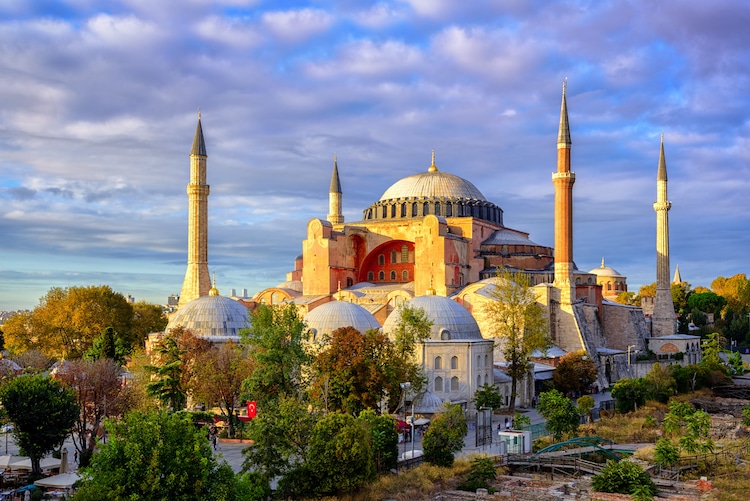 The Eurasian city of Istanbul, Turkey has a rich history. Its pivotal location on the Bosporus strait makes it a transcontinental city that links the east and west. For this reason, it was an important capital to two great empires—the Byzantine and the Ottoman. Remarkably, this legacy of different cultures and movements can still be seen throughout Istanbul today.

One of the best examples of this historical fusion is the architectural structure called Hagia Sophia. Famous for its massive dome, Hagia Sophia was originally founded during the Byzantine empire as an Eastern Orthodox cathedral in 537 CE Later on, it went through different lives as a Roman Catholic cathedral and a mosque. Now, Hagia Sophia exists as a secular museum, wherein thousands of visitors come each year to see the spectacular map of history latent in its various architectural styles. Here, we explore the twists and turns of Hagia Sophia’s history.

Explore the architectural history of the Hagia Sophia.

Before the erection of Hagia Sophia, the same site was used for two different Byzantine churches, both of which burned down due to their largely wooden materials. As a result, Emperor Justinian I (c. 482-565 CE) ordered a new and more lavish church to be built in 532 CE. He requested high-quality marble from throughout his empire, and employed over ten thousand people for the project. Architect Anthemius of Tralles was the Isidor of Miletus who presided over the project, using mostly masonry for the basilica, and marble for the columns. Almost six years later, on December 27, 537 CE, Justinian I inaugurated the new basilica.

The completed basilica is considered to be an exemplar of Byzantine architecture. It features an imperial dome (which would be renovated several times to eventually be 102 feet in diameter and 184 feet in height), a large nave, and glittering golden mosaics that cover the interior walls.

TRANSITION FROM CHURCH TO MOSQUE

After Constantinople (now Istanbul) fell to the Ottoman empire in 1453, the church was ordered to be converted into a mosque. This involved the construction of wooden minarets, chandeliers, a mihrab (niche indicating the direction of Mecca, and a minbar (pulpit). Surprisingly, the golden mosaics were not destroyed during this process and were instead plastered over—indirectly preserving them.

During the renovations of the interior, the iconic Islamic calligraphy collection was also added to the Hagia Sophia’s walls, which is unseen in any other mosque.

THE HAGIA SOPHIA AS A MUSEUM

After centuries of life as a mosque, the first Turkish President, Mustafa Kemal Atatürk, ordered the Hagia Sophia to be made into a secular museum in 1935. At this time, the plaster was removed from the walls to reveal the mosaics, and the carpets were taken away to show the intricate marble floor decoration called the Omphalos. The Islamic decorationswere kept in place, and several renovations were made to the interior.

Now, when visitors come to the Hagia Sophia they can view the amalgam of Byzantine and Ottoman styles, which is unlike any other building in the world.