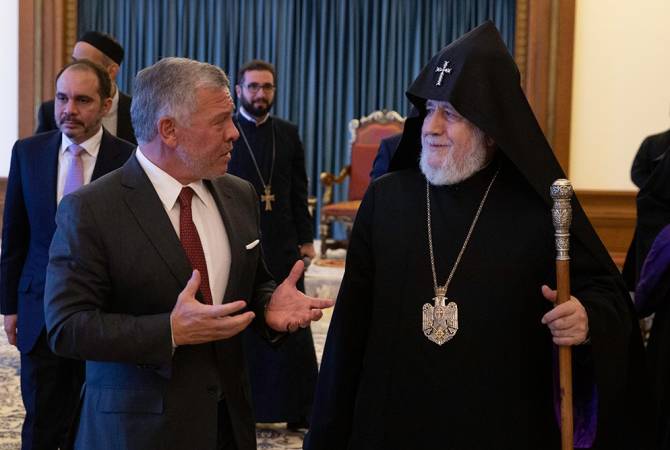 Catholicos of All Armenians hosts King Abdullah II of Jordan

YEREVAN, FEBRUARY 11, ARMENPRESS. Catholicos of All Armenians Karekin II hosted on February 11 King Abdullah II of Jordan, who is in Armenia on an official visit.

As ARMENPRESS was in formed from the Facebook page of the Mother See of Holy Etchmiadzin, His Holiness hoped that this visit will further strengthen the relations between the two countries.

Karekin II reaffirmed with pleasure that the careful attitude of the authorities of Jordan towards the Armenian community and the Armenian Patriarchate of Jerusalem is the best prove of friendly relations.

The Catholicos of All Armenians noted with satisfaction that the heirs of the survivors of the Armenian Genocide were able to resume to normal life in Jordan, making their contribution to the progress of the country.

Referring to the fact that for historical reasons Armenia has a great Diaspora living next to various cultures and religions, His Holiness highlighted the close cooperation between the spiritual leaders of different countries aimed at prevention of abuse of religious feelings and intolerance among societies. In this context, Catholcos Karekinn II noted that the relations between Armenia and Jordan, as well as the life of the Armenian community on Jordan can serve as a good example of friendship and co-existence for many nations in their efforts to establish Christianity-Islam or other inter-religious relations.

King Abdullah II of Jordan expressed satisfaction for the meeting, talking particularly about the relations between Christian and Islamic peoples.

King Abdullah II of Jordan noted that Armenia and Jordan have many opportunities for developing cooperation.

The King of Jordan expressed concern over the situation in the Middle East, the problem of the diminishing number of Christians in that region and particularly about the Armenian community in Syria, expressing readiness to provide necessary assistance to the preservation of the Armenian Christian presence.

Catholicos Karekin II wished success to the King for the sake of the progress of the Hashemite Kingdom of Jordan and the welfare of the Jordanian people.