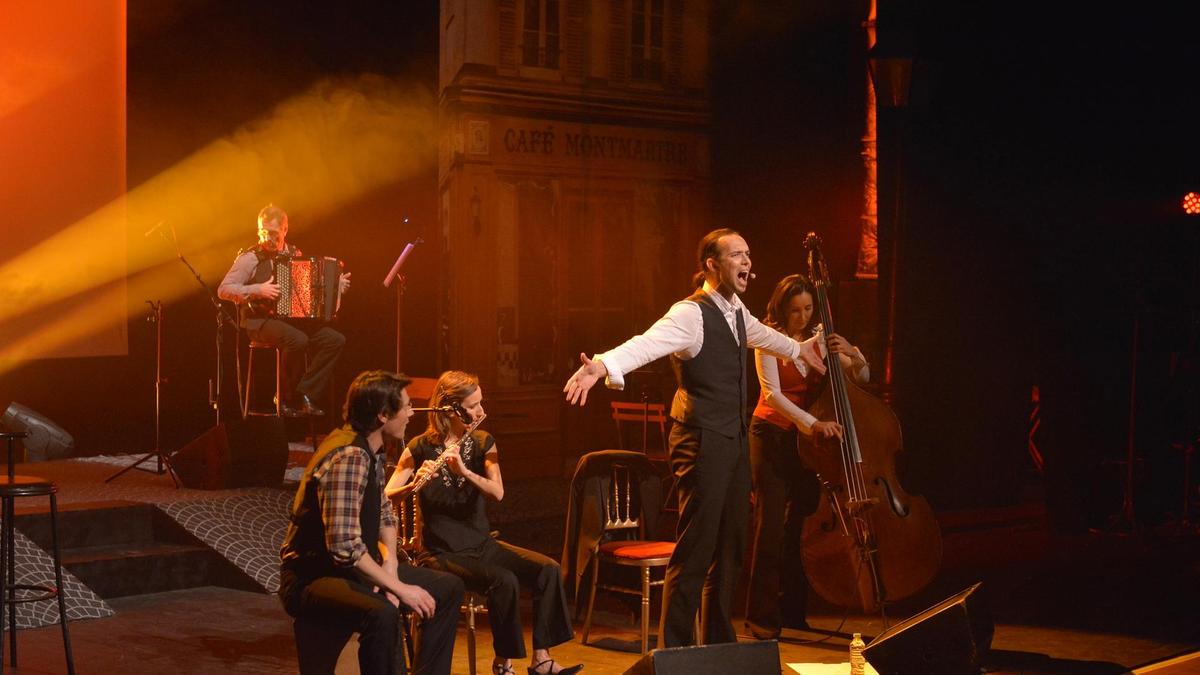 Charles Aznavour is one of Paris’s most enduring and romantic troubadours. The late French-Armenian singer had a career spanning seven decades, during which time he recorded more than 1,200 songs in nine languages. Now, some of those songs are coming to the UAE on Valentine’s Day, in a performance that is a tribute to the legendary tenor.

Formidable! Aznavour is at Dubai Opera tomorrow and Friday for three shows. The performance will transport the audience to the streets of Paris during its Bohemia era. Aznavour’s classic La Boheme famously underscores this time.

The lyrics are about a painter who recalls his younger years in Montmartre, where he was living as a hungry but happy artist. Formidable! shines the spotlight on both the singer’s life in Bohemian-era France and his Armenian roots. The set design, along with images and videos projected on to the backdrop, will help audiences venture from Paris to Broadway and on to the jazz clubs of Montreal, where he played in nightclubs before becoming famous.

We change the set list, which has some 30 songs, based on where the show is taking place. There are staples, of course – like La Bohemeand Jezebel. But audiences in Paris have favourites that are different than those in Montreal or in Dubai, and we want to pay tribute to that.

But how do the showrunners decide which of Aznavour’s 1,200 songs to bring to the stage? “That was definitely a challenge,” Gil Marsalla, producer and director of the show, says. “We change the set list, which has some 30 songs, based on where the show is taking place. There are staples, of course – like La Boheme and Jezebel. But audiences in Paris have favourites that are different than those in Montreal or in Dubai, and we want to pay tribute to that.”

Marsalla says it’s always likely they’d miss a few favourites, that’s why the final 15 minutes of the set list is up to the audience. Jules Grison, who will take on the role of Aznavour in the show, will ask members of the audience to submit their most-loved Aznavour songs. “They have two minutes to tell us their favourites,” he says. “We’ve learnt more than 200 songs. And while that’s only a fraction of the songs Aznavour wrote and recorded, we still have a good deal covered.”

What makes Formidable! an official Aznavour tribute is that it was given the green light by the singer himself. Marsalla and Grison met the legendary singer in New York after his 2016 Madison Square Garden show. “It was very important to us that we had his blessing,” Marsalla says. “We presented the project to him, and told him it was a celebration of his music and his career. I’m proud to say that he was very supportive.”

Marsalla says that Aznavour was expected to attend two of the concert’s earliest performances. Scheduling issues barred him from attending the first performance, and he died in 2018, shortly before the second performance he was supposed to attend.

Grison will be singing Aznavour’s songs with a five-piece band playing everything from the accordion to drums and double bass. He says their first tour in Canada was one of the most memorable performances of the show since it opened in France in 2016. “It was in October 2018, two weeks after Aznavour died,” he says. “There was a profound connection between us and the audience. We all wanted to pay tribute to Aznavour and his remarkable career. It was a beautiful moment.”

Grison, who is an avid listener of the French lyric-driven chanson genre, says he has been listening to Aznavour ever since he was a child. His parents would often play his records in their home, and Grison would try and sing along to the signature tenor when he was little. “That’s why it’s such an honour to do this tribute. For me, he’s like someone I’ve known for a very long time. I feel connected to him and his music.”

Though it is Marsalla’s second time coming to the Dubai Opera – the director was previously here to present the 2019 Piaf! Le Spectacle tribute to Edith Piaf – it is Grison’s first time. He says he is excited to perform at one of the most prestigious venues in the Middle East. “There is no better way to celebrate Valentine’s Day,” he says. “Most of Aznavour’s songs were about love and to pay tribute to them on the most romantic day of the year is a dream.”