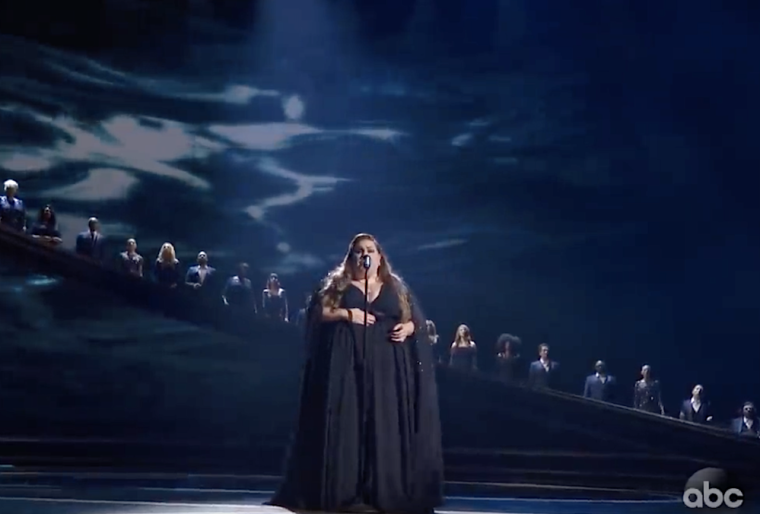 The 92nd Academy Awards took place Sunday night in Hollywood, California, and featured a set of historic moments along with powerful performances from the stars of the faith-filled films, “Breakthrough” and “Harriet.”

“This is Us” actress Chrissy Metz made her Oscars debut by performing her song, “I’m Standing With You,” which was nominated for best original song from the 2019 Christian film “Breakthrough.”

“Breakthrough” tells the miraculous true story of Joyce and John Smith, a mother and son who rely on the power of prayer and the Holy Spirit following a fatal accident that leaves the son dead for 45 minutes. Following the mom’s desperate prayers, the son is brought back to life.

Metz took center stage in a long black dress featuring a glittering cape and sang the lyrics of the tune, written by Diane Warren, with conviction as she was accompanied by a chorus who stood on a diagonal platform behind her.

“When you’re hurting/I want you to know/That you’ll never have to hurt alone/When your faith is, faith is running low/I never lose faith in you/When the nights around you/And you think that no one cares about you/I will go and throw my arms around you,” she sang.

The prestigious award show also invited multi-talented actress and singer Cynthia Erivo to perform the song “Stand Up” from the film “Harriet,” in which she plays Harriet Tubman.

The biopic is based on the historic mission of Harriet Tubman and gives viewers a glimpse into the faith-led mission of the iconic abolitionist.

Erivo, adorned in a gold dress, kicked off the moving ballad standing on the stage alone before being joined by backup dancers.

“So I’m gonna stand up/Take my people with me/Together we are going/To a brand new home,” she belted out.

“I go to prepare a place for you,” Erivo sang as the last statement of the song.

In a past interview, Erivo revealed that she had a rough time playing Tubman specifically when she is faced with the possibility of failing her first rescue mission. The actress had to ask God for help in portraying the legendary role.

“The only thing I could do, really, to center myself was to pray,” Erivo shared with an audience during a Q&A, Ambotv reports. “I think the thing that happened as that was happening and throughout, was my faith got stronger.”

Both performances from Metz and Erivo garnered standing ovations from everyone in the audience.

Another notable moment was when “Peanut Butter Falcon” breakout star Zack Gottsagen made history at the Academy Awards as the first presenter with Down syndrome.

Gottsagen walked out on stage with his co-star, Shia Labeouf, to present the award for the live-action short film category. The actor waved to the audience at the Dolby Theater who stood and applauded him before he introduced the nominees.

Gottsagen then proudly said the “Oscar goes to,” then LaBeouf announced the winner, “The Neighbor’s Window.”

While filming “Peanut Butter Falcon,” LaBeouf ran into some trouble and was arrested. As reported by CP, Gottsagen spoke to him about God after the incident and it impacted him greatly.

“We were getting ready to do a scene and Zack said, ‘Do you believe in God?’ And I thought, No f—— way are you about to explain God to me, Zack.’ Zack said, ‘Even if He’s not real, what does it hurt?’” LaBeouf explained.

He added, “I don’t believe in God. But did I see God? Did I hear God? Through Zack, yeah. He met me with love, and at the time, love was truth, and he didn’t pull punches.”