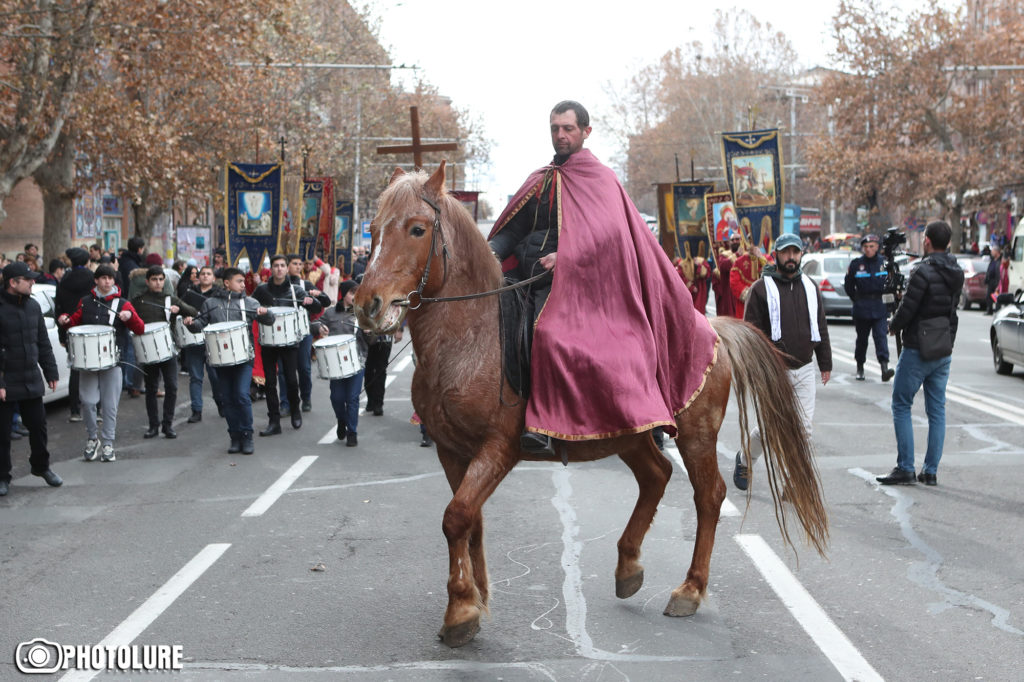 Armenia Celebrates the Feast of St. Sarkis, Patron of Love and Youth

(Armradio)- By the order of His Holiness Karekin II, Supreme Patriarch and Catholicos of All Armenians, the Feast of St. Sarkis the Captain and his soldiers-companions is proclaimed as the day of the blessing of the youth.

Captain St. Sarkis is one of the most beloved saints of the Armenian nation. Together with his 14 soldiers-companions, he was martyred for the sake of the Christian faith.

During the reign of king Kostandianos the Great (285-337) St. Sarkis, being very courageous, was appointed the prince and General in chief of the region of Cappadocia bordering Armenia. When king Julianos the Betrayer (360-363) took over, the persecutions against Christians started, St. Sarkis and his only son – Martyros, came to live in Armenia, and the Armenian king Tiran, grandson of Tiridates, received them very well. From Armenia St. Sarkis and his son went to Persia and started serving in the army of the Persian king Shapouh as the captain of regiments.

Learning that Sarkis was Christian the king Shapouh ordered him to worship the fire and offer sacrifice to the heathen gods. But the captain immediately refused to obey the order saying, “We should worship one God – the Holy Trinity, which has created the earth and the heaven. Whereas fire or idols are not gods and the human being may destroy them.”

After these words, the saint destroyed the temple. The annoyed crowd fell on the saint and his son. First, the saint’s son was martyred. The saint was put into prison and remaining unshaken in his faith was beheaded. After the martyrdom of the saint, light appeared over his body. 14 soldiers-companions of the saint also were martyred for the sake of the Christian faith.

For the Armenian nation St. Sarkis is one of the most beloved. St. Mesrop Mashtots brought the relics of the saint to the village Karbi (Ashtarak Region) and the Church of St. Sarkis was built over his relics.

In Armenia the Feast of St. Sarkis is celebrated not only according to church rites and prayer but also according to various folk traditions. St. Sarkis the Captain is the patron of youth. Many miracles happen thanks to his intercession. On the day of the feast young people pray to the saint asking him to make their prayers reach to God. St. Sarkis is the realizer of the love longings.

There are many legends about St. Sarkis and one of them is the following:

Poor bard Gharib loved Shah-Sanam who was the daughter of a very rich man. Shah-Sanam loved him, too, but because the bard was poor, the Shah-Sanam’s father was against their marriage as he wished to marry his daughter to a rich man.

Bard Gharib decided to go to foreign countries to earn money and to accumulate wealth. But before leaving for foreign countries bard Gharib asked Shah-Sanam to promise to wait for him for seven years providing that if he were late even for one day the young woman would marry according to her father’s will.

That seven-year-period was a very difficult period for bard Gharib. He couldn’t see his beloved, had no news of her, and nevertheless, he wasn’t disappointed and waited for the time when they would meet, start a family and live together ever after.

Working day and night for seven years bard Gharib accumulated wealth and started his way back to the motherland. However, on his way back he faced many difficulties and hardships. It seemed to him that he wouldn’t be able to reach his beloved. So, he prayed with an honest heart and righteous mind for the help of St. Sarkis asking.

Listening to the prayer of the bard St. Sarkis immediately appeared sitting on his white horse, seated him on the back of the horse and in one moment brought him to Shah-Sanam. Seeing the bard’s strong will, their sincere and deep love and devotion, Shah-Sanam’s father blessed their union.

Fast of Catechumens established by St. Gregory the Illuminator precedes the feast. On the eve of the feast, in the evening, young people eat salty cookies and relate the appearance of their future bride or bridegroom in their dream to eating the salty cookie. Also, on the night preceding the feast of St. Sarkis the faithful people place a tray full of gruel before the door believing that while passing near their door at dawn St. Sarkis will leave his footprint on the gruel symbolizing the fulfillment of their dreams.

People in love present each other cards, flowers or sweets on the occasion of the feast.

On the day of the feast, a Divine Liturgy is celebrated in all churches named after St. Sarkis. Following the Liturgy, a special ceremony of the blessing of young people will be offered.

A march with crosses took place in the streets of Yerevan, Armenia

Armenian youth march with St. Sarkis flags on the streets of Yerevan.

Soldiers participate in the march dedicated to St Sarkis in Yerevan, Armenia

A march with crosses took place in the streets of Yerevan, Armenia