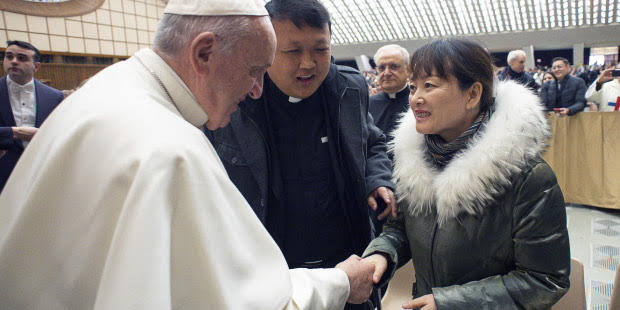 Pope Francis has met and greeted the unidentified Asian woman to whom he had asked pardon following his impatient reaction with her, when she tugged his arm and refused quickly to let go, on New Year’s Eve.

The episode had happened following the Vigil Mass, when he left the Vatican Basilica and was greeting the faithful in St. Peter’s Square.

This moment of amends was taped on January 8, 2020, in the Vatican’s Paul VI Hall, in Vatican Media photographs, and confirmed to Italy’s principal news agency, ANSA.

While ANSA has written that during the encounter Francis asked pardon for what had happened, the Holy See Press Office has not confirmed the encounter or what transpired during it.

This was the first weekly audience since the episode, given there was no General Audience on January 1st, due to the Feast Day.

Pope Francis had asked pardon publicly for his impatient reaction with the woman who abruptly grabbed him last night when he stepped into St. Peter’s Square to meditate near the Nativity Scene and to greet the crowds. He did so on January 1, 2020, before praying the midday Angelus with those gathered in St. Peter’s Square, recalling that “love is patient.”