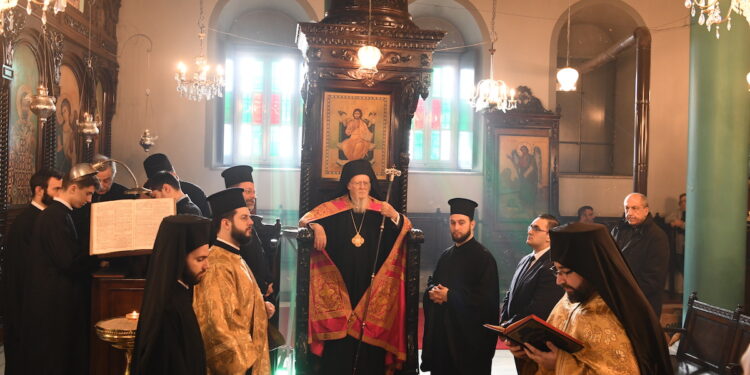 Ecumenical Patriarch Bartholomew presided over the Divine Liturgy on Saturday, February 1, 2020, on the Feast Day of Saint Tryphon, the protector saint of farmers, at the Church of the Nativity of the Mother of God in Constantinople. After the celebration of the Divine Liturgy, the Ecumenical Patriarch spoke of the Greek community, which continues to keep the religious traditions of their ancestors alive in Constantinople.

“You must continue to maintain what has been destroyed over time, that is the legacy our fathers left us, who suffered a great blow during the September events in Constantinople,” said the Ecumenical Patriarch in his speech and he congratulated Metropolitan Maximos of Selyvria on the renovation of the church.

“We will continue all together tο follow the path that the Greek community has laid down and to carry on the religious traditions of our fathers. The Ecumenical Patriarchate will never be transferred elsewhere and its enemies will never shout in triumph as victorious fighters. Truth and justice will ultimately prevail. Truth and justice are on the side of the Ecumenical Patriarchate,” he added.

On the Feast Day of Saint Tryphon, who was a farmer, the Ecumenical Patriarch referred to the environmental problems that humanity faces today and to the need to protect the Earth, which is God’s creation and our Common Home. In addition, he mentioned the bushfires that continue to rage in Australia.

Metropolitan Maximos of Selyvria said in his speech, “The Theotokos never abandoned our church. We lay our hopes on her and pray in order she to always protect our sacred church, the city, and the Ecumenical Patriarch, who strives for the visibility of the Ecumenical Throne, and above all for the defence of its laws and privileges.”