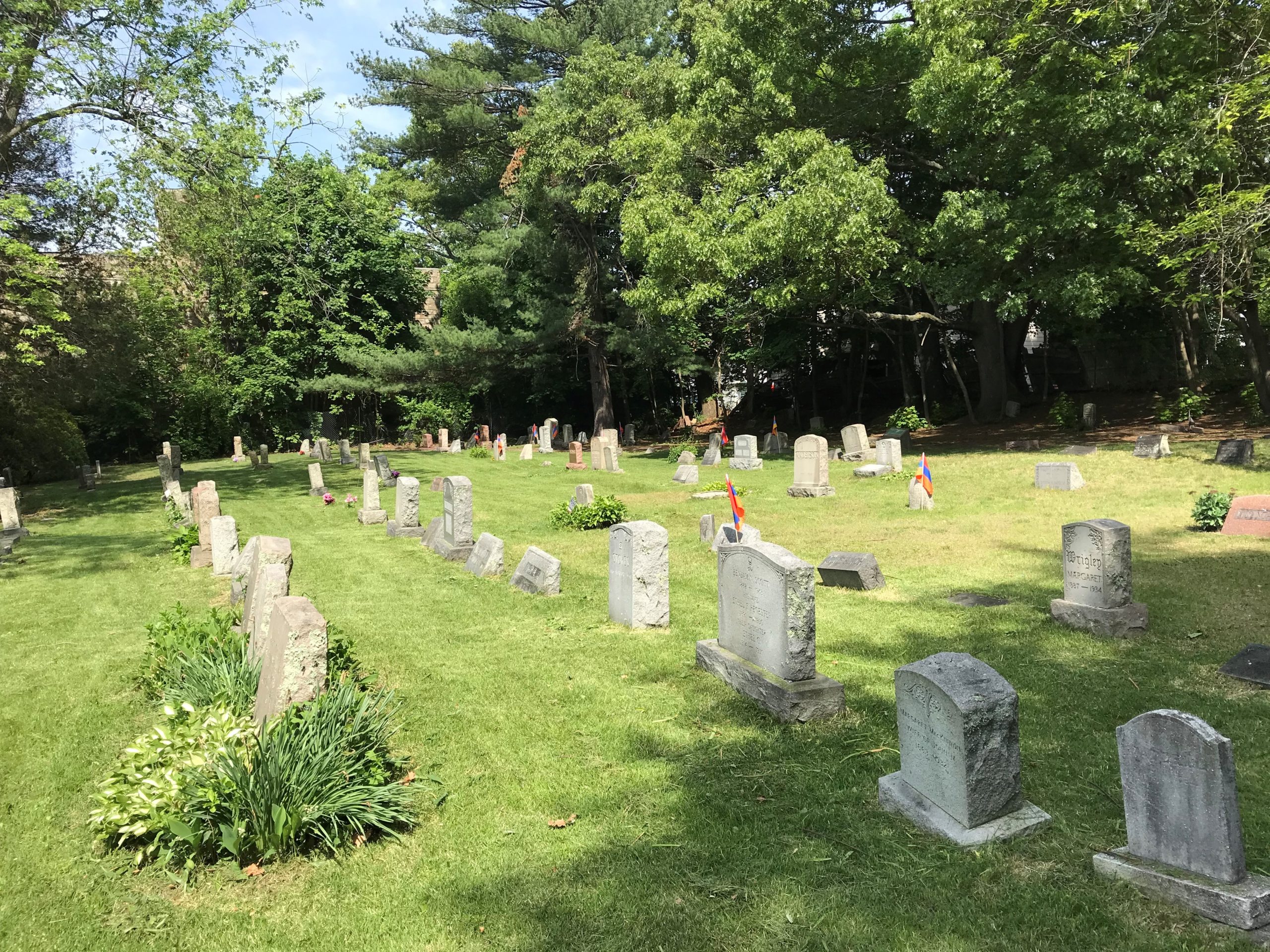 Not in Our Backyard

PROVIDENCE, RI—In the once affluent part of Cranston, RI which borders on the south side of Providence is the historic Oakland Cemetery. Years ago this privately owned cemetery was the burial place of many immigrant Armenian families, wealthy, poor, educated, working class, infant, elderly and many genocide survivors. Like many city centers across the nation, this part of town and with it the Oakland Cemetery had become a neglected and forgotten part of the landscape. Oakland Cemetery had become a sort of dumping ground for both natural debris and rubbish, and this sacred place which once was regularly visited by families and blessed by clergy for the repose of souls had become unrecognizable and unsafe. In recent years family members would no longer visit and remember their deceased loved ones at the burial place because in fact the family plots had become overrun with rubbish, broken tree limbs, overgrown grass and city street trash. Some grave markers were no longer even visible. As Stephen Elmasian, treasurer of the Sts. Vartanantz Armenian Apostolic Church Men’s Club explained, the trash, debris, branches and weeds were knee deep when walking through this holy ground when the Men’s Club began their project.
In a major grass roots and honorable effort, Elmasian and other members of the Sts. Vartanantz Church Men’s Club made a commitment to adopt the “Armenian” neighborhood of the Oakland Cemetery and began cleanup and restoration. Since the spring of 2016, this effort has included thousands of “man” hours and the clearing of thousands of bags of garbage and vegetative waste. Numerous tombstones that had been laying front side down in the dirt, covered with dirt and tree limbs have been lifted with the sheer strength of the volunteers and placed in their rightful and righteous places. As Men’s Club member Paul Chobanian explained emotionally when describing one gravestone that he helped lift with several others, “The engraved cross was laying in the ground in the mud…now it is facing God and heaven.” He along with the other members of the Men’s Club vowed that they would do this cleanup and restoration till they didn’t have the strength to do it anymore.
This slideshow requires JavaScript.
The hands-on work and cultural significance of this effort was presented at The Armenian Historical Association of Rhode Island (AHARI) in Providence during a roundtable discussion on Sunday, January 26. Men’s Club chairman Tom Kizirian and secretary Armand Kibarian were also on the panel. The project motto, “Not In Our Backyard,” was initiated in 2006 as a response to the destruction of the Julfa Cemetery by the Azeris in Nakhichevan. Julfa Cemetery at the time of the attacks was known to have the largest number of khatchkars (Armenian cross stones) in all the world. “Not in Our Backyard” became a motto and a pledge to work as a community to save and restore Oakland Cemetery.
To date, more than sixty men and women have volunteered on Saturday mornings during the spring, summer and fall, clearing and saving what is now considered to the members of the Men’s Club almost a family effort because they have to come to know and love the souls buried there. One grave is that of a four-year-old child and from time to time some of the members will bring toys and leave them in remembrance of that young Armenian boy they never met.
Over 300 graves have been identified, hokehanquist (requiem) services have been said by the RI Armenian clergy for the past four years each spring and Armenian flags are placed at each grave for this blessing.
The Men’s Club plans to continue their amazing work this new year once the weather breaks, and they encourage participation by anyone who would like to become a part of this community labor of love. To learn more or make a donation to assist with the “Not In Our Backyard” Project, please contact Elmasian at steveelmasian@gmail.com. For more information regarding AHARI and its programs, visit armenianhistorical-ri.org or email info@armenianhistorical-ri.org.
Guest Contributor