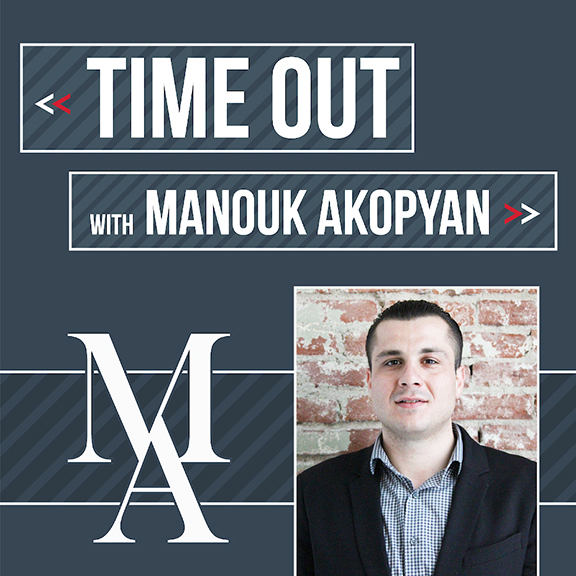 LOS ANGELES—A new radio show dedicated to shining light on Armenian issues, individuals, and organizations that are making an impact throughout the diaspora has debuted across airwaves and every major audio platform.

Manouk Akopyan, a journalist, writer and editor for over 13 years, has launched the one-hour radio show “Time Out With Manouk Akopyan” on KLOS-FM 95.5 HD3 and SoCal Armenian Radio. It will air every Monday from 8 to 9 p.m. PST, reaching more than 200,000 Armenians living in the Los Angeles area. “Time Out With Manouk Akopyan” is also available internationally on demand for Spotify, Apple Podcasts, Google Podcasts, Breaker, RadioPublic, Anchor, Overcast, and Pocket Casts.

“Time Out With Manouk Akopyan” is a global Armenian lifestyle radio show that discusses culture around the nexus of arts, entertainment, sports, film, music, food, business, and everything else in between. The program features interviews with prominent guests who lead extraordinary lives, careers, and serve as leading role models for the next generation.

“Hosting a radio show that spotlights the Armenian community is a dream come true,” said Akopyan. “I’m very proud of my Armenian heritage and culture, and most of our heroes are, too. I can’t wait to cover people in the diaspora who are making a difference, and create thoughtful dialogue that makes an impact. The conversations and interviews can be consumed not only Armenians, but everyone who finds the subjects and their stories as a source of inspiration.”

Akopyan is formerly the managing editor of the international lifestyle publication Yerevan Magazine. During his years-long tenure there, in addition to running the magazine, he interviewed the likes of Hall of Fame tennis player Andre Agassi, Food Network chef and restaurateur Geoffrey Zakarian and casino magnate Alex Yemenidjian for cover stories, among many others.

“Time Out With Manouk Akopyan” promises to bring the same caliber of guests that resonate among the global community.

Akopyan is a lifelong Los Angeles native and a California State University, Northridge journalism graduate. He’s worked as a writer and editor for NFL Media, and later in the same capacity for the Los Angeles Times and Tribune Publishing.

“Time Out With Manouk Akopyan” will originally air across Lotus Communications Corporation networks in collaboration with Radio Iran 670 AM, which has been on American airwaves for over 20 years.

The show is taped in Studio City, California out of Lotus headquarters. Lotus owns and operates radio stations and television properties across the United States.