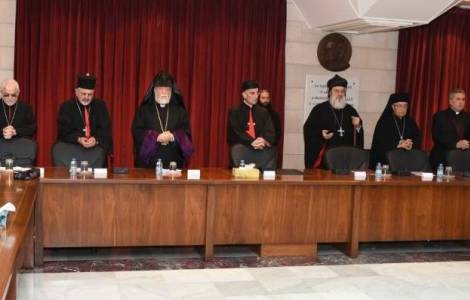 Openness and encouragement towards the new government, denunciation of the scourge of corruption, together with the warning that the legitimate right to demonstrate cannot be invoked to justify the violent and “uncivilized” actions perpetrated by groups of troublemakers in squares and on the Lebanese streets during the protests in recent months. These are the judgments and appeals shared by the Heads of Churches and ecclesial communities present in Lebanon, gathered on January 28, 2020, at the invitation of Maronite Patriarch Bechara Boutros Rai at the Maronite patriarchal see of Bkerkè, reported by Fides News Agency. Reason for the meeting: to evaluate together the delicate historical passage crossed by the Lebanese nation. Melkite Greek Catholic Patriarch Youssef Absi, Syrian Catholic Patriarch Ignace Youssif III Younan, Syrian Orthodox Patriarch Mar Ignatius Aphrem II, Catholicos of Cilicia of the Apostolic Armenians Aram I and Reverend Joseph Kassab, President of the Supreme Council of the Evangelical Communities in Lebanon and Syria also took part in the “spiritual summit” of the Heads of the Churches in Lebanon.

In the joint document, released at the end of the summit, the heads of the Churches present in Lebanon, among other things, express satisfaction for the formation of the new government entrusted to Hassan Diab, and for the experts co-opted by the Premier in charge of the government team. The ecclesiastics call on the entire political class to take the path of structural reforms decisively, necessary to bring the country out of the economic crisis that is suffocating it. Church leaders also ask to stop the bleeding of resources stolen from the Lebanese people from corruption. Patriarchs, Bishops and heads of Christian communities reaffirm their full right to publicly express their dissent towards the political class, but at the same time firmly condemn the “uncivilized” character that various street demonstrations have taken, especially in Beirut, expressing appreciation for the work of the army and the security forces, and urging violent groups to express their dissent and reiterating that the salvation of the nation can never come through bloodshed.