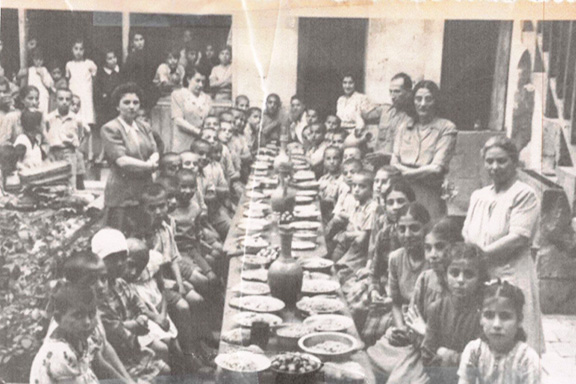 Editor’s Note: The following is an excerpt from Mary Najarian’s upcoming book, “Maro,” the saga of a little girl in Aleppo. A book signing for “Maro” will be be held on Sunday, February 9 at 3 p.m. at the Armenian Society of Los Angeles, located at 117 S. Louise St., Glendale, CA 91205. For more information, contact marobook2020@gmail.com.

Gulbenkian School, located in the heart of Aleppo, Syria, just a few miles from the famous Citadel, originally admitted only the Armenian orphans of Aleppo. At one time, 200 orphans between the ages of 4 to 14 attended the school from kindergarten up to the sixth grade. But in the mid 1940’s, when the number of orphans declined from 200 to a mere 100, the school opened its doors to the good students of needy families. My sister, Rose, was one of the first students to be admitted, and I joined her the following year.

Under the strict supervision of Hairig and Mairig, the 100 orphans lived in Badesbaran, the orphanage, an old stone building, which at one point had housed a harem of a rich Sheik. The orphans had to go through a number of old, narrow, and dark cobble stone alleys to get to school. Luckily, it was only a ten-minute walk.

The orphans wore gray uniforms with black buttons going down the left side of their frocks. This made it easy to identify them, but I always wondered if they really wanted to be identified. They walked to school in pairs, and as soon as the last two walked through the iron gate of the schoolyard, Mr. Sinan Sinanian, our art teacher, would ring the school bell and the students would quietly gather for the morning routine.

School started with Mr. Vrej, a volunteer Yerets Scout from Homenetmen, standing on the platform in his scout uniform and leading us through ten minutes of calisthenics. Then we would sing a sharagan, recite Hayr Mer, and walk in a straight line to our classrooms.

School had already been in session for three weeks, when two new orphan children were admitted. We were all curious to see who they were and why they started school so late. By the end of the day, it was known all over the school that the two students were brothers. Five-year-old Boghos was in kindergarten, and seven-year-old Bedros was in the first grade. They did not have a father, and their mother had found a job with an Armenian family in Beirut, Lebanon, leaving her two children, Boghos and Bedros, in Badesbaran under the care of Hairig and Mairig. The two brothers looked like identical twins with fair skin, rosy cheeks, straight, spiky brown hair, and hazel eyes. Only when they stood next to each other could you see that it wasn’t the case as Bedros was a whole hand taller than Boghos. Nonetheless, the two brothers were the cutest kids in school.

At recess, they would sit on the bench in the farthest corner of the playground and Boghos, the younger one, would cry nonstop.

“When is Mama coming back? I want her.” His cries were heard during every recess and lunch period. Some of the older students had taken a liking for the two brothers and would try to console Boghos, but it was hopeless.

One Monday morning, the two brothers came to school glowing with joy. At recess, the first person they ran to was Lucineh, a fifth grader, who had developed a close relationship with the brothers. Bedros took Lucineh to their usual bench, pulled out a piece of paper from his uniform pocket and said, “Read Lucineh, read, so you’ll believe me when I say my mom is going to send money so we can go to her in Beirut.” Bedros thrust himself forward in order to sit beside Lucineh while she read the letter.

Lucineh held the precious piece of paper and read in a loud voice:

My dear sons Boghos and Bedros,
I am in Beirut with Mr. Zareh and Mrs. Anna. I take care of their little boy Levonig. He knows all about you and wants you to come and play with him. We live on the third floor in a very tall building, and I can see the sea from the balcony. By Christmas, I will have enough money to send it to you so you can come here and be with me. So be patient and be good boys. Bedros, you are a big boy, take care of Boghos. He needs you.
I love you.
Bachigner,
Mom

From then on, it became a daily ritual for Boghos to run to Lucineh during recess and ask her to sit on the bench and read his mother’s letter. As soon as she would finish reading, Boghos would say, “Please Lucineh, read it one more time.” The letter was read over and over again. Sometimes Boghos would ask, “Tell the truth Lucineh, is that all my mother says in the letter?”

Christmas was getting closer. The boys were anxiously waiting for the letter from their mother to take them to Beirut, but it never arrived. They had started to lose hope and Boghos had resumed his crying. They feared that they would never see their mother again. Lucineh promised the boys that she would go to church on Sunday, light a candle, and pray for their mother to earn enough money to send for them.

To Raise Money for the Bus Fare

When going to church, lighting a candle, and praying did not bring a letter from the boys’ mother, Lucineh came up with another idea. One morning, she took me aside and confidentially said, “Listen, the boys’ mother, does not have enough money to send it to the boys to take them to Beirut. We have to collect money to buy their bus tickets and send them to Beirut so they’ll reunite with their mother for Christmas.”
“How? What money? Where are we going to get all that money?”
“See, my mom gives me 25 Ps (piasters) to buy lunch on Fridays,” said Lucineh. “ I know you also bring money for lunch sometimes. Let’s not buy lunch and save the money for the bus fare. We will also ask some of our friends to give money, I know they will.”

The money collection started that same day and each contributor was asked to keep the donations and Lucineh’s plan a secret. No one was to mention or say anything to anyone. Some students gave 5 Ps. Some gave 10 Ps. Lucineh and I both gave 25 Ps. each, but, when time came close to Christmas vacation, we were still short 30 Ps.

I begged my grandmother for an advance of 30 Ps. on my lunch money which she finally gave after some coaxing. This made my contribution a total of 55 Ps. for this very deserving cause.

We had collected a total of 450 Ps, which was all that was needed for the two bus tickets to Beirut. We were jumping from joy and proud to have accomplished the most difficult but worthy cause.

Early in the morning, two days before Christmas break, the day the plan was being executed, Lucineh came to me, opening her lunch bag, she said, “Drop your lunch here.” When I looked surprised, she said, “What do you think these kids will eat on that ten hour bus trip?” I quietly obeyed and handed over my lunch, which consisted of half a pita bread, a piece of cheese, and two dried figs.

Carrying the lunch bag in one hand and grasping the bus fare wrapped with newspaper in the other, Lucineh waited outside the school gate. Everything was going as planned. Mr. Sinanian rang the school bell, and the orphans were entering school in pairs. As soon as Boghos and Bedros neared the school door, Lucineh handed them the money and lunch bag and said, “Run, and do exactly what I have told you to do.”

We were so happy that the boys finally had everything they needed to reunite with their mother for Christmas. They had the bus fare for their trip to Beirut, the lunch for their long journey, and the letter from their mother with her address, “the tall building on the third floor overlooking the sea in Beirut.”

We were excited and proud of our accomplishment. We were certain, they would be with their mother in Beirut by the time we got home from school.

But our joy did not last long. During lunch, there was a lot of commotion as screams and shouts were heard from across the playground. Baron Ardashes, our principal, was walking to his office, holding Boghos in one hand and Bedros in the other. He had summoned Hairig and Mairig who were walking behind him.

Lucineh and I were very sad. Our plan had failed. However, we were certain that Baron Ardashes would never know we were involved. Lucineh had asked every donor to swear to secrecy and not to mention names.

After just a few minutes of interrogating the boys, Lucineh was called to the principal’s office. Somebody had snitched but who could it be?

It did not take too long for the true story to surface. The entire school knew that the two brothers had gone to the bus stop and had given the bus driver their 450 Ps. for their trip to Beirut.

“Where are your parents?” the bus driver had asked. “My dad is dead, and my mother is in Beirut waiting for us.” As proof, Bedros had given their mother’s tattered letter to the driver. After reading the letter, the bus driver had become suspicious and brought the boys back to school.

The next morning was our last day of school before the Christmas break and everything seemed to be normal. As usual, we did our calisthenics with Mr. Vrej, sang our Sharagan, “Louys, Louys,” recited “Hayr Mer,” and then something happened. Baron Ardashes called Lucineh and me to the podium. Why me? What had I done? Quietly we went up and stood in one corner. My knees were shaking and I had no idea what to expect. I was terrified.

In a very stern and angry voice, Baron Ardashes explained the severity of the occurrences of the previous day. Facing us directly he said, “If the bus driver had taken these two boys to Beirut and dropped them off in a strange city, at an unknown place, on an unknown street, with unknown people, what would have happened to them? With neither friends nor family to meet them, no shelter, no food, no money, no knowledge of their mother’s whereabouts, they would have starved to death on the streets of Beirut, and you two would have been the cause of it all. You will be punished. No recess for the two of you for an entire week. Hopefully, you learned a lesson.”

P.S. Boghos and Bedros joined their mother in Beirut at the end of the school year.