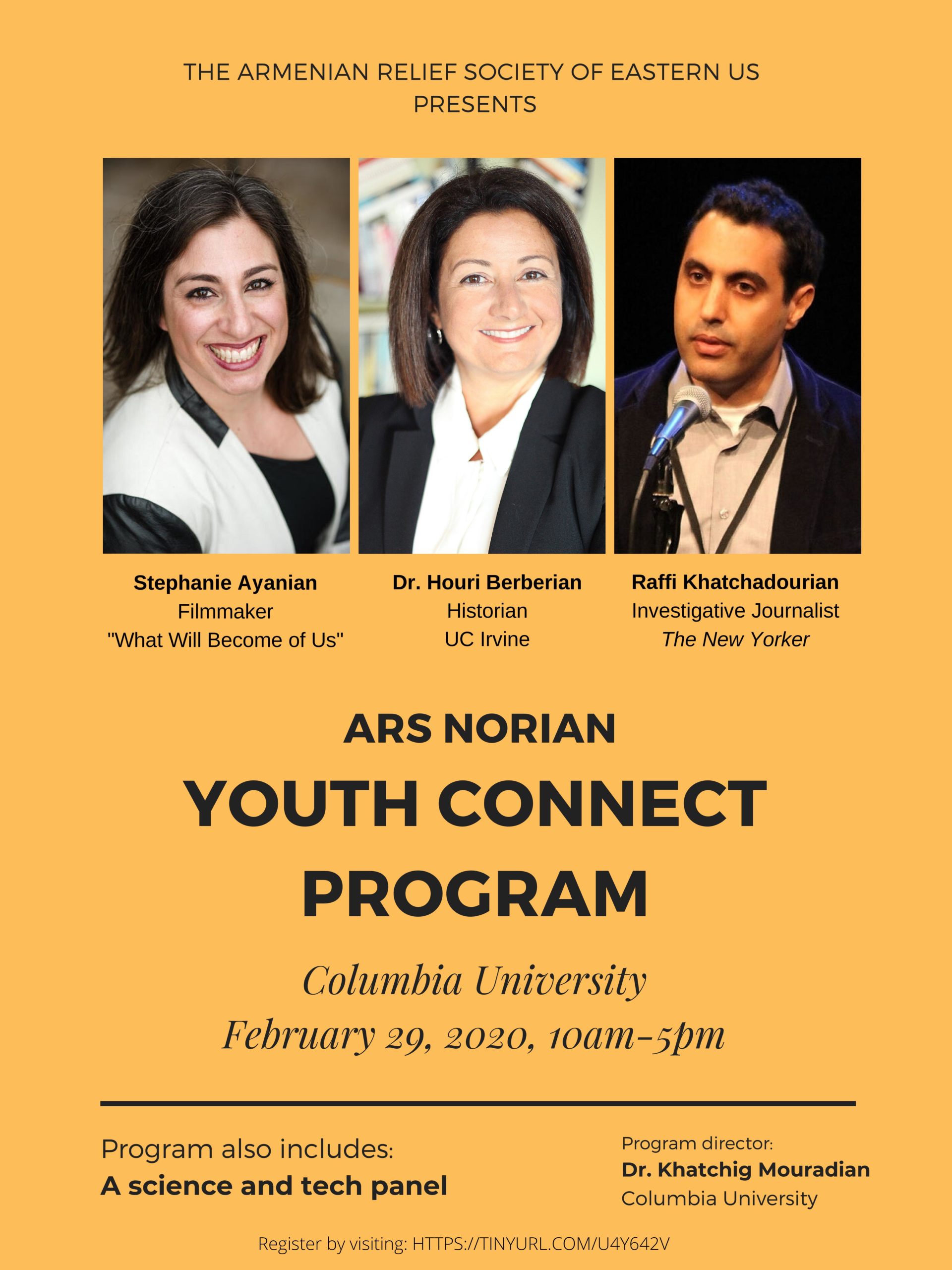 WATERTOWN, Mass.—Journalist Raffi Khatchadourian (The New Yorker), historian Houri Berberian (UC Irvine), filmmaker Stephanie Ayanian (“What Will Become of Us”), and a panel of science and tech experts will be headlining the Spring 2020 installment of ARS Norian Youth Connect Program.
Raffi Khatchadourian has been a staff writer at The New Yorker since 2008. He covers a wide range of topics, including science, art, politics, foreign affairs, and national security. His articles have been anthologized in “Best American Sports Writing” and in “Best American Nonrequired Reading.” On two occasions, Khatchadourian’s work was nominated for National Magazine Awards—once for his profile of an Al Qaeda propagandist, titled “Azzam the American,” and a second time, in collaboration with a New Yorker multimedia team, for “Secrets of Edgewood,” an investigation into Cold War psychochemical experiments. His work has also been short-listed for Overseas Press Club and James Beard Foundation awards and for the Livingston Award.
Houri Berberian is Professor of History, Meghrouni Family Presidential Chair in Armenian Studies, and Director of the Armenian Studies Program at UC Irvine. Her talk will be based on her new book, Roving Revolutionaries: Armenians and the Connected Revolutions in the Russian, Iranian, and Ottoman Worlds. The talk explores three of the formative revolutions that shook the early twentieth-century world occurred almost simultaneously in regions bordering each other. Though the Russian, Iranian and Young Turk Revolutions all exploded between 1904 and 1911, they have never been studied through their linkages until now. Roving Revolutionaries probes the interconnected aspects of these three revolutions through the involvement of the Armenian revolutionaries—minorities in all of these empires—whose movements and participation within and across frontiers tell us a great deal about the global transformations that were taking shape. Exploring the geographical and ideological boundary crossings that occurred, Berberian’s archivally grounded analysis of the circulation of revolutionaries, ideas, and print tells the story of peoples and ideologies in upheaval and collaborating with each other, and in so doing it illuminates our understanding of revolutions and movements.
Stephanie Ayanian is a film producer, director and educator. She will be screening a seven-minute version of her feature documentary, What Will Become of Us, a project focusing on Armenian Americans today, followed by discussion. She previously produced Kinderwald, an Official Selection of Munich International, Seattle International, Napa Valley and Slamdance film festivals. Ayanian co-owns Storyshop, an independent production house for creative media. Before starting Storyshop, Ayanian worked as a senior producer/director for Penn State Public Broadcasting where she was the producer and co-director of Liquid Assets: The Story of Our Water Infrastructure, for which she received the American Association of Engineering Societies Award for Journalism. She holds an MFA in Film and Media Arts from Temple University and a BA in Film and Video from the Pennsylvania State University. She teaches documentary film production at Drexel University.
The program will be held on Feb. 29, at Columbia University in New York.
Armenian university students age 18-27 are encouraged to register for this weekend of workshops, discussion, and networking that is capped at 100 participants.
The registration fee of $50 covers participation in the program on Saturday, including breakfast, lunch, dinner, and the evening social. Overnight accommodations will be provided to out-of-town students only.
More details are available on YCP’s Facebook page.
Armenian Relief Society Eastern U.S.