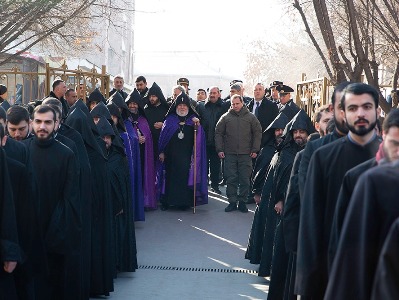 On January 26, a Divine Liturgy devoted to Army Day was celebrated at St. Astvatsatsin (Holy Mother of God) Church in Etchmiadzin, and under the auspices of Catholicos of All Armenians Karekin II.

Armenia’s Minister of Defense Davit Tonoyan, Chief of the General Staff of the Armed Forces Artak Davtyan, Commander of the Artsakh (Nagorno-Karabakh) Defense Army Karen Abrahamyan, clergymen from the Mother See of Holy Etchmiadzin, and representatives of the senior officers of the Armed Forces of the Republic of Armenia attended the divine service.

Afterwards, an official reception was held at the Mother See of Holy Etchmiadzin, during which an awards ceremony was also conducted.