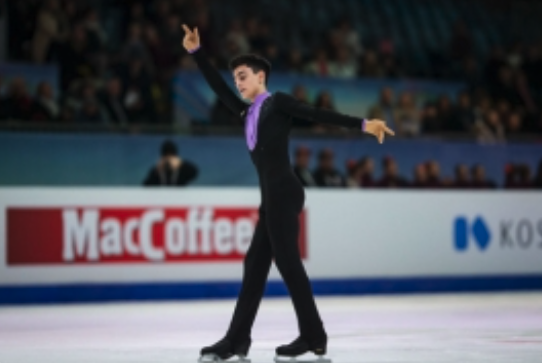 “Danielian takes a medal at his first European Championships with this performance,” the ISU revealed after the winners were announced.

16-year-old Danielian was the youngest competitor in the men’s event of the championships.

Danielian’s musical performance to “La Traviata” was highlighted by a quad Salchow-triple Salchow combination, a quad Salchow and triple Axel-triple toeloop as well as three more triples. However, he fell on a triple Lutz and stumbled on the first triple Axel. The 2018 World Junior silver medalist scored a personal best of 162.11 points and was ranked fourth in the Free Skating, but pulled up from third to second overall at 246.74 points, edging Kvitelashvili by just 0.03 points.

“I did not expect to be on the podium. My goal was to show a decent skate, to get my name out on the senior level and prove that I can compete with the senior skaters and look decent compared to them,” Danielian noted. “I did a lot of work before the Europeans, it was good, consistent and skating here well is the result of the work we have done,” he added.

Dmitri Aliev of Russia stormed to gold with 26 points to spare to take the European title, while Morisi Kvitelashvili earned the bronze, becoming the first Georgian man to win a medal at the European Figure Skating Championships.