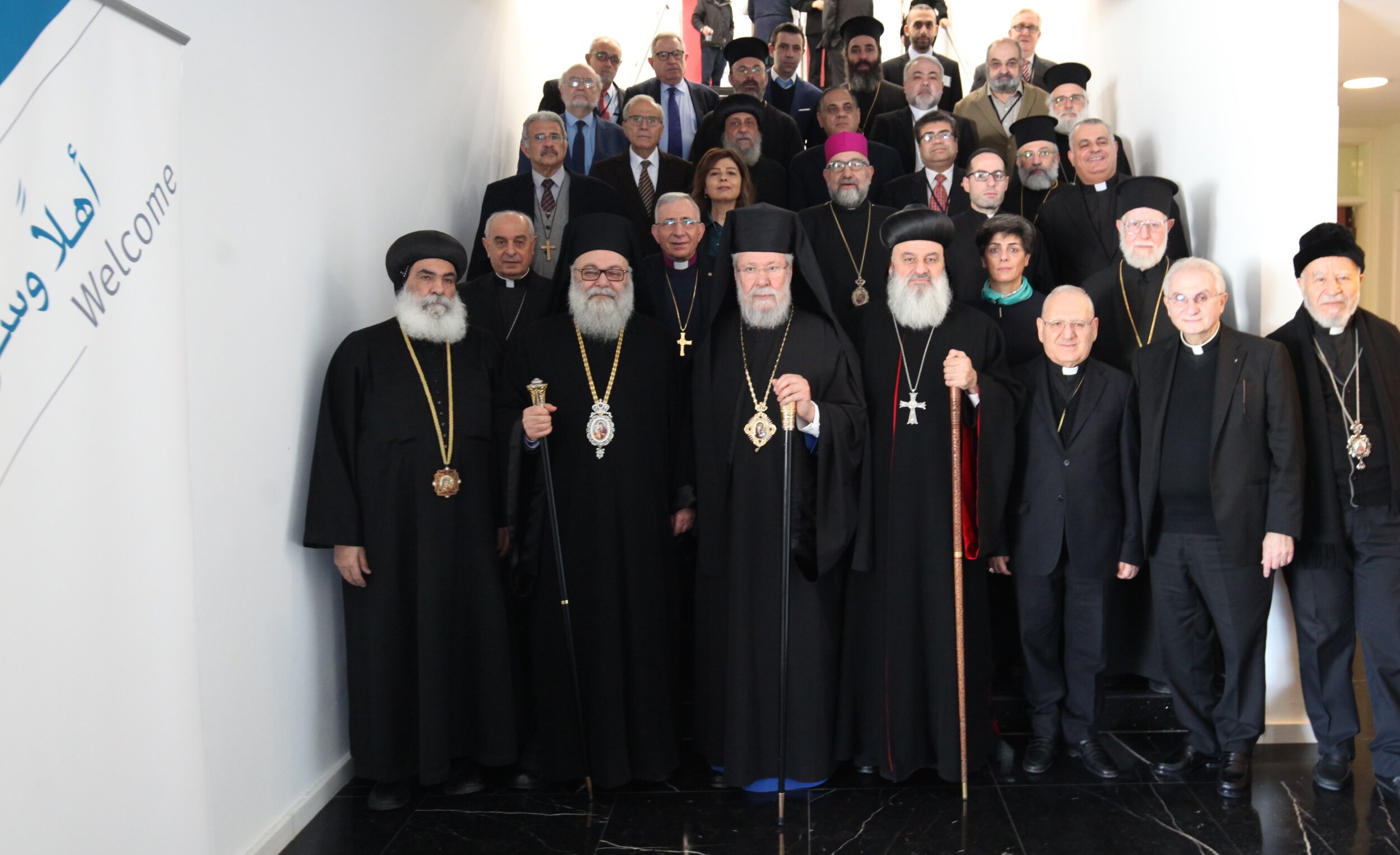 Over the course of two days (January 21 – 22/ 2020), the Executive Committee held its regular meeting in Larnaca – Cyprus. The meeting was generously hosted by His Beatitude Chrysostomos II, Archbishop of Nova Justiniana and All Cyprus of the Greek Orthodox Church of Cyprus. The members of the Executive Committee who participated in the meeting came from Cyprus, Egypt, Syria, Lebanon, Iraq, Jordan, and Palestine.

This meeting is held in the midst of a period full of painful events and suffering plaguing our Middle Eastern countries. The Executive Committee members are fully aware of the suffering, afflictions and challenges faced by the people in the region as well as by Churches. They contemplated the divine affection of Our Lord Jesus Christ and His unparalleled love for humanity. They call on Christian believers in the Middle East to hold on to their faith and hope and believe that God is among us, supports us and engages us in His divine life. They also urge the Member Churches of the Council to be fully present next to every refugee and displaced person who is in pain after losing his family, friends or properties due to violence and war so that the churches remain an icon of divine affection and spaciousness.

After the opening prayer, the agenda was approved, and the minutes of the Executive Committee’s meeting held at the Syrian Orthodox Patriarchate of Antioch (Atchaneh – Bickfaya – Lebanon/22-23 January 2019) were adopted.

The first day discussions tackled many topics such as spiritual renewal, ecumenical-geopolitical challenges and interfaith dialogue as well as the institutional development of the MECC and its empowerment after the crisis that it has been through. This will lead to the development of its strategic orientation in preparation of the 12th General Assembly. On the second day, the participants discussed the report of Dr. Souraya Bechealany, the Secretary General, that includes the Council’s achievements during 2019 and its future prospects. They also examined the annual reports of the departments as well as the financial report.

Based on the discussions, mainly focusing on the challenges faced by Christians in the Middle East and their partners in citizenship, the Executive Committee stressed the following:

1-    Promote the ecumenical cooperation between the Middle East churches on theological, social services and media levels in order confirm their choice of unity in the witness of Jesus Christ that have risen.

2-    Pray for the discovery of the fate of their Eminences Archbishop Boulous Yazigi and Archbishop Youhanna Ibrahim who have been kidnapped in April 2013, and request the international conscience to work for their safe return and to allow them to continue their mission that is focused on peace building and human dignity.

3-    The escalation of tension in the Middle East and the Arab World requires prayer and work for peace and new initiatives to counter waves of extremism in order to preserve peace in the society, protect human dignity and pave the way for wise dialogue and conflict resolution while rejecting violence and war.

4-    The popular movement that Iraq is witnessing, calls for an active contribution to achieve social justice, economic integrity, good governance, national sovereignty and entrench the principles of accountability and the fight against corruption through a fair judiciary system.

5-    The exacerbation of the Syrian people’s suffering requires the deployment of intensive efforts in all sectors to lift the embargo, promote the path of peace building and the restoration of security, and to work hard to ensure the appropriate conditions that will allow the return of refugees and displaced people to their land.

6-    Recognize the efforts of the Hashemite Kingdom of Jordan that has been entrusted with the protection of Christian and Muslim sacred sites in the holy city of Jerusalem as well as the strengthening of Christian presence in cooperation with churches. In addition to that, it has been working for the promotion of Christian-Muslim dialogue and living together in citizenship.

7-    The participants pray for the Lebanon that is witnessing masses protests carried out by the Lebanese people demanding a decent living and the good management of their common resources; so that Lebanon, the “Message”, regains its cultural role as a model of pluralism for common good and as an example of responsible freedom.

8-    Support all efforts to restore the unity of Cyprus in order to unify the Cypriot people, promote regional and international peace, and put an end to the occupation that has caused the division of the island.

9-    Continuously support churches in Palestine and recognize the people’s resilience despite their suffering in the face of occupation, segregation and colonization. Call for the respect of the freedom of religion for all Palestinians including Christians and Muslims, and the respect of the legal and historic status-quo regarding the fact that East Jerusalem is the capital of a viable independent Palestinian state.

10  -The Egyptian people have always aspired to consolidate the path of citizenship, free from extremism and isolation. They are coexisting to promote the living together which leads us to confirm that they are collectively aware of the positive consequences that it stores in their country.

11  – The fact that people in the region are calling for a complete citizenship based equal rights and duties, and diversity, requires a review of the systems and laws. This proves that there is an urgent need to formulate a path which emphasizes on understanding unity in diversity while considering that diversity is richness, away from sectarian and factional exhortations and all forms of intolerance.

12  – The poverty and the marginalization that some classes of society in the region suffer from call all states and ecclesial institutions to design developmental sustainable policies that ensure a decent life for every human being and that contribute to social justice and economic prosperity.

13  – The MECC calls on Christians in this blessed Middle East to hold on to their lands, their heritage and their identity with faith and hope, and to enhance their role in consolidating living together, mutual respect and social solidarity.

14  – The ongoing refugee and displacement crisis require intensive efforts from the international community especially the United Nations and faith-based organizations, to facilitate the return of these refugees and displaced people to their countries of origin while offering them a decent and protecting their identity and civilization. This situation also requires providing constant support for host communities and ensuring resilience components as well as the protection of refugees and displaced people until their safe return.

15  – Ensure active coordination and communication in preparation of the General Assembly of the Middle East Council of Churches that is expected to be held between the 16th and 19th of September 2020 in Lebanon. It will be entitled” “Take heart, it is I; do not be afraid.” (Matthew 14:27) and will be generously hosted by His Beatitude Cardinal Mar Bechara Boutros Al-Rai – Maronite Patriarch of Antioch and all the East – in Bkerki.

In conclusion, the MECC Executive Committee Members thank His Beatitude Chrysostomos II and the Greek Orthodox Church in Cyprus for generously hosting this meeting and thank Our Lord Jesus Christ, that gathers His Church through His love.The MECC Executive Committee Members are confident that the churches of the Middle East weren’t and will never be alone in their witness, while renewing their faith in the promise of God “I am with you always, to the end of the age.” (Matthew 28:20). We also believe that the path towards the 12th General Assembly will embody the common witness of the Churches and will shed light from a realistic and prophetic perspective, on the role of Christians in the suffering Middle East especially in the fight for human dignity. This requires the solidarity of the leaders as well as a solid cooperation to guarantee a bright future suitable for the Middle East and its value, where diversity is a model of living together.