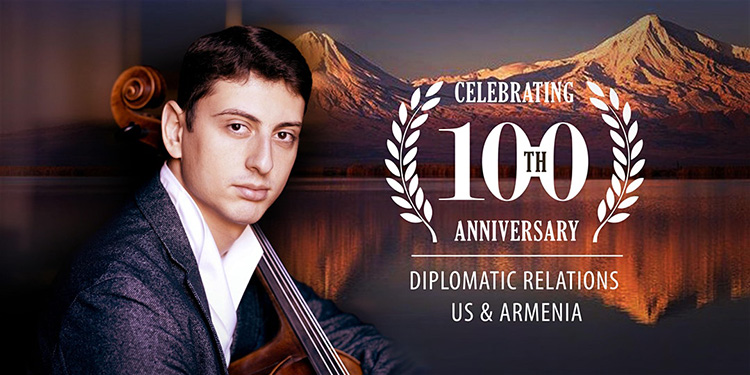 WASHINGTON, DC — The year 2020 marks the centennial of the establishment of the diplomatic relations between the US and the Armenian Republic, the only South Caucasian state recognized and supported by the United States at the time.

On April 23, 1920, the US Secretary of State Bainbridge Colby delivered a note to Armenia’s representative in Washington, Armen Garo, that stated: “I am pleased to inform you, and through you, your Government, that, by direction of the President [Woodrow Wilson], the Government of the United States recognizes, as of this date, the de facto Government of the Armenian Republic.”

The recognition (by the executive branch) was confirmed by the US Senate on May 13, 1920, upon the unanimous recommendation of its Committee on Foreign Relations.

Held in a renowned Washington institution, this concert will be dedicated to this momentous occasion in the shared history between American and Armenian people and feature one of the world’s most acclaimed cellists, Narek Hakhnazaryan.

Since winning the Cello First Prize and Gold Medal at the XIV International Tchaikovsky Competition in 2011 at the age of 22, Hakhnazaryan has inspired audiences around the world with his artistry. His prior awards included the 1st Prize in the 2006 Khachaturian International Competition in Armenia, the 1st Place in the 2006 Johansen International Competition for Young String Players in Washington, and the 1st Prize in the 2008 Young Concert Artists International Auditions in New York. A distinguished international orchestral soloist, he has appeared with the Baltimore, St. Louis, Seattle, Toronto, London, WDR, Frankfurt Radio, Sydney, New Zealand, and NHK Symphony Orchestras; the Royal Stockholm, Czech, Seoul, Netherlands, and Rotterdam Philharmonics; the Utah Symphony; Los Angeles Chamber Orchestra; Orchestre de Paris; and the Teatro dell’Opera in Rome, and collaborated with celebrated conductors, such as, Alsop, Bělohlávek, Gergiev, Guerrero, Koopman, Hannu Lintu, Neeme Järvi, Pletnev, Robertson, Sarasate, Slatkin, and Sokhiev. Hakhnazaryan plays on a 1707 Joseph Guarneri cello.

For the program that will include works of Armenian, American, and European composers, Hakhnazaryan will be joined by an American pianist Noreen Cassidy-Polera, who is among the most highly regarded and diverse chamber artists performing today. She maintains a career that has taken her to every major American music center and to Europe, Russia, and Asia, with performances at Alice Tully Hall, Zankel Hall and Weill Recital Hall at Carnegie Hall, 92nd Street Y, Jordan Hall, Isabella Stewart Gardner Museum, Kennedy Center, and Salle Cortot.