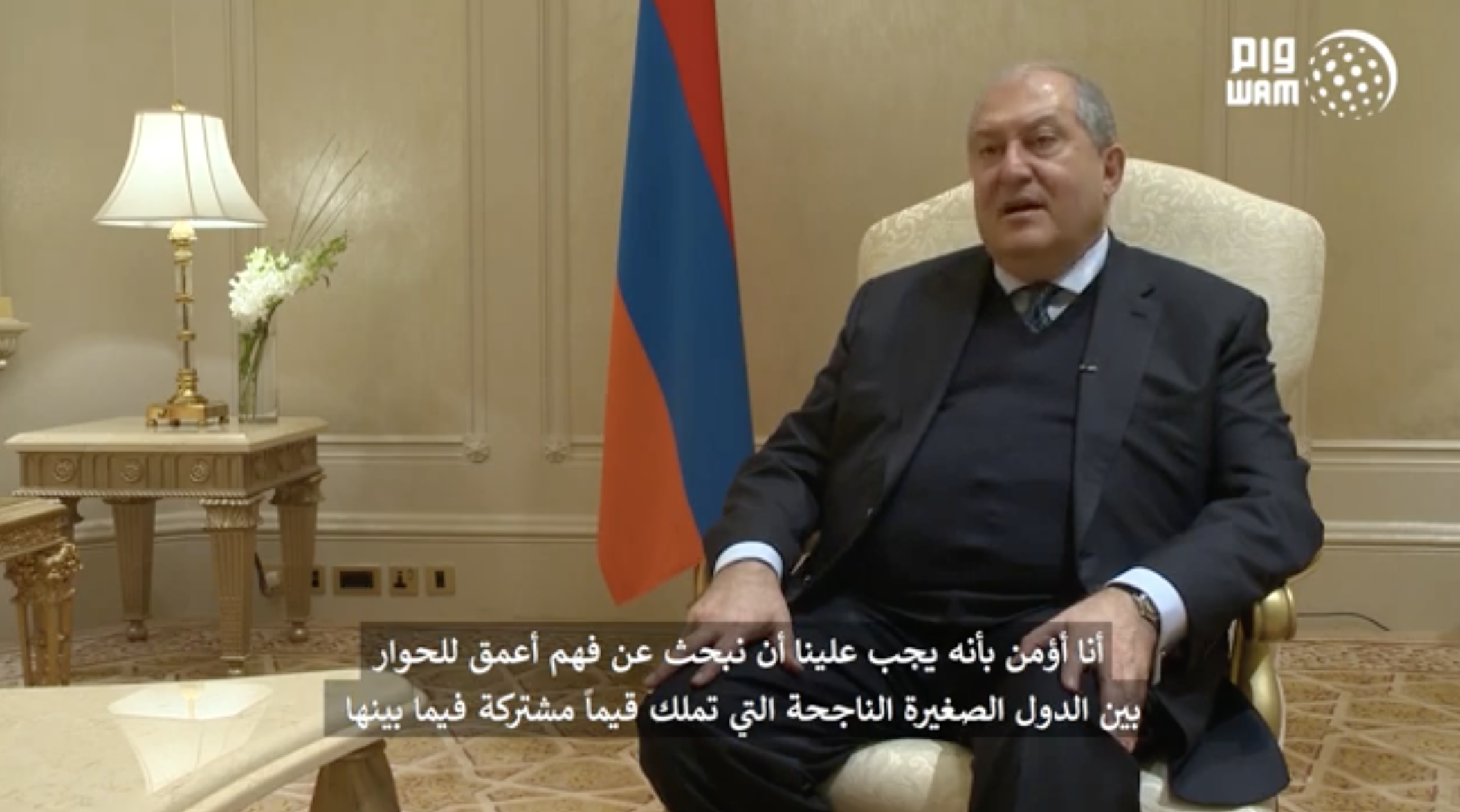 EXCLUSIVE: ‘My small Christian country and UAE can spread tolerance across globe,’ President of Armenia says

ABU DHABI, 21st January, 2020 (WAM) — Increased interaction among smaller nations such as Armenia, the oldest Christian state in the world, and the UAE, a young Muslim nation, which have “strong values,” will help spread the idea of tolerance across the globe, the Armenian President Armen Sarkissian said.

“Somehow we have to find deeper understanding, dialogue and correlation among smaller nations that are intact … that are successful … that have similar values. We have strong values and we can show the world that we all can live in harmony and friendship,” he said in an exclusive interview with Emirates News Agency, WAM, in Abu Dhabi.

He appreciated the UAE’s propagation of tolerance as a value based on the Islamic teachings.

“I don’t see any reason why we cannot be tolerant, but also be respectful to each other’s culture, behaviour, religion and value. We cannot only coexist but we can do something together also,” Sarkissian said.

Armenia is the oldest Christian state in the world, he pointed out. “We have four neighbours and in three of them [Azerbaijan, Turkey and Iran] majority of the population lives in Islamic values. One of them is Christian-majority: Georgia,” he explained.

“I do not see a reason why we cannot work together [with those neighbours], developing the wonderful ideas that come from our beliefs and religions to make them be valued and respected by others,” the president stressed.

“I mean having respect to the beliefs of your neighbour and friends. Tolerance is the right word. But we have to do beyond tolerance something called ‘human love,’ love and belief in God,” he noted.

“In my understanding, tolerance is beyond tolerating; it is something more. It is showing love to someone different to you,” Sarkissian, 66, said. “Countries such as Armenia and the UAE can show that being different does not mean anything and we can live in harmony and friendship.”

“I enjoyed very much meeting with young people. It is like meeting with the future,” he said about his participation at the ADSW.

He thinks advanced technologies would play a major role in reducing the damage caused to the environment. “We can use that technologies to recreate normal and natural conditions our ancestors had around 200 years ago.”

Sustainability is a much more complex issue. “When I think about it, sustainability of culture, moral values, the way we educate the children, and gender equality come to my mind,” he said.

He praised UAE’s efforts and endeavours in empowering women and moving up the ranks in gender equality, describing it as “impressive.”

The UAE has topped the Arab World in the UN’s Gender Equality Index 2019, and ranked 26th globally.

“If I compare the UAE even with European countries, I am quite impressed with what it has achieved in gender equality. The high number of Emirati ladies in high positions in the government is quite impressive,” he said.

Talking about his dream project ATOM (Advanced Tomorrow) to develop science and technologies in Armenia, he said, “It is an exercise to take us to the future. We have to design and predict the future.”

The project would consist of an entertainment park depicting the future with an emphasis on Artificial Intelligence, as well as Tomorrow’s Museum, which will “show how the world will look like in the next 50 years,” he explained.

There would also be a city for science and technology, in which leading international companies, research centres and universities will be based and start their own innovations.

An educational platform that would guide youngsters “where to go in life and where to get proper education,” is also part of the project. “In the future, the youngsters may get a job there as well,” he said.

The president thanked the UAE leadership for hosting an Armenian community and their churches. “I want more Armenians to come and live in the UAE and I love to invite our friends in the UAE to visit Armenia,” he concluded.