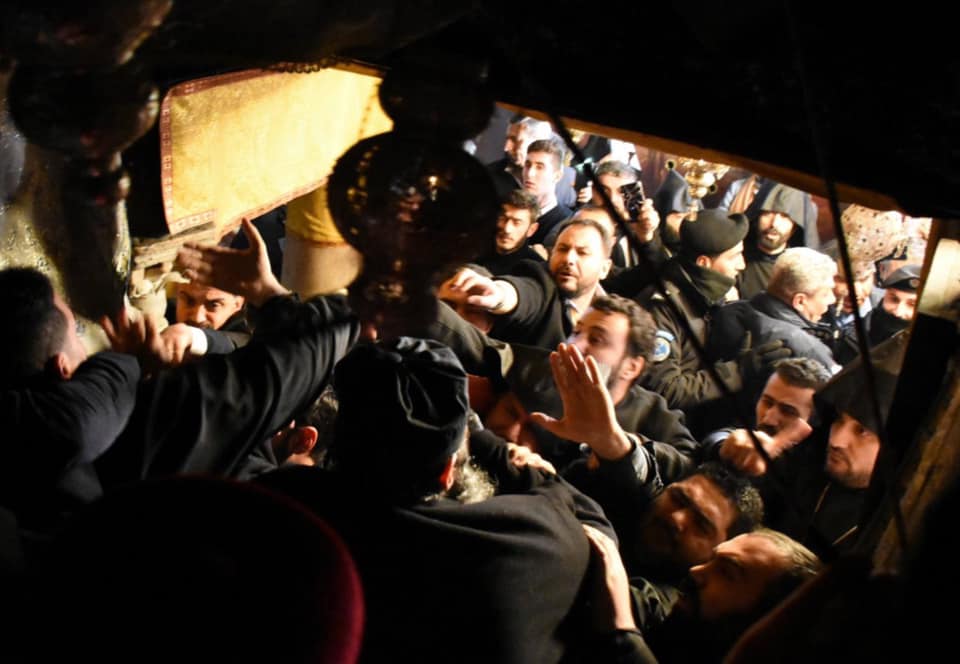 COMMUNIQUE from Armenian Patriarchate of Jerusalem

According to the Status Quo, on January 18-19, the Armenian Apostolic Church has the right to celebrate the feast of Nativity and Revelation of our Lord Jesus Christ in the Nativity Church of Bethlehem.
Before the Christmas season, the Status Quo communities of Armenians, Greeks and Latins prepare a program of “Religious Ceremonies in Bethlehem”. According to the program, on January 18 at 11:00, the St. James Brotherhood, presided by His Beatitude the Armenian Patriarch of Jerusalem, together with the pilgrims and faithful, makes a solemn entry to the Nativity Church. From there, they proceed to the Armenian Convent adjacent to the Nativity Church. From 14:00-18:00 another solemn entry is held in the Basilica and then entry to the Grotto. Thereafter Vespers and Divine Liturgy is celebrated in the Grotto. The ceremonies resume at 22:00. At midnight special ceremony is held in the Grotto from where His Beatitude delivers his Christmas message to the Armenian nation. On January 19, at 1:00-6:00 solemn Divine Liturgies and “Blessing of Water” is held.
On the feast of the Armenian Christmas and Revelation, the Grotto belongs to the Armenian Church for 24 hours. Armenian icon, Gospel and two candles are put on the Altar of the Star in the Grotto.
On January 18, after the Armenian Divine Liturgy at 18:00, the Greeks have right to incense in the Grotto. This year however, the Greeks demanded from the Armenians to move the icon, Gospel, and candles from the Altar of the Star in order to put their icon. This was rejected by the Armenians because the Greeks don’t have any right to do so. A quarrel was followed between the two sides.
After the negotiations and especially taking into consideration the personal request of His Excellency Mr. Mahhmoud Abbas, the president of Palestine, His Beatitude the Armenian Patriarch of Jerusalem decided for only this year 2020, allow the Greeks, to hold their icon in front of the Altar of the Star without moving the Armenian icon, Gospel and candles from the Altar of the Star.
During the Greek incense this year, the policemen held their icon. Right after the incense, the icon was taken out of the Grotto.
It is worth mentioning that on January 18, 2020, violation of the rights of the Armenian Apostolic Church was not recorded, and the temporary agreement, was only for the year 2020.
After the feasts, the two communities, together with government officials, will meet to solve the problem relying on the submitted documents.
The Armenian Patriarchate of Jerusalem and Saint James Brotherhood effectively carry out the mission of protecting the rights of the Armenian Apostolic Church in the Holy Places of the Holy Land. That mission was entrusted to the Armenian Patriarchate of Jerusalem for centuries.
Armenian Patriarchate of Jerusalem
19 January, 2020