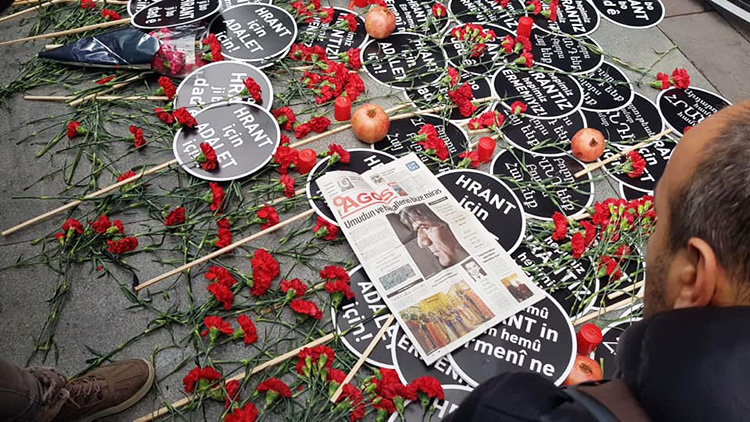 Hundreds of people gathered on Sunday outside the former offices of Agos newspaper in Istanbul where Turkish-Armenian journalist Hrant Dink was murdered 13 years ago.

The 52-year-old was editor-in-chief of Agos, a weekly newspaper published in both Turkish and Armenian. He was shot dead in broad daylight in front of Agos’ central Istanbul office on January 19, 2007, by then 17-year-old and self-styled Turkish nationalist Ogen Samast.

Samast was handed a jail sentence of 22 years and 10 months for Dink’s murder in 2011, followed by an additional two and a half year sentence in 2019.

However, Dink’s death became national scandal after it was discovered that security forces were aware of the murder plot, but failed to act.

A total of 76 suspects, including police officers, are on trial as part of the case. The final result of Dink’s murder case has long been awaited, with his family and friends continuing on the quest for justice.

“For Hrant, for justice,” the crowds chanted in Istanbul. “We have not forgotten and we will not let it be forgotten.”

“There are courthouses in this country but there is nothing in the name of justice,” mourner Seyit Dogan told AFP.

Hakan, one of the supporters who joined the mourning, lamented that the murder had remained unsolved for so long.

“Hrant was killed here 13 years ago. For 13 years they haven’t shed light on his death,” he told AFP.

“We won’t stop following Hrant’s murderers. Whether they shed light on this or not, as Hrant’s brothers, we will continue to be here.”

After the ceremony, carnations were laid on the sidewalk where Dink was shot dead.

A giant picture of Dink, embellished with slogans reading “It is not late to be ashamed” and “This case will not be over before we say it is over” were hung by mourners outside the building that once housed Agos, and on whose steps Dink was shot.

The office building has been reopened as a memorialto its founder by the Hrant Dink Foundation, an organisation advocating for freedom of expression established after his death. Agos continues to be published, but from a different Istanbul office.

“We gave this name [to the site] inspired by Hrant’s article, in which he talked about April 23 and 24 and said: ‘I wish we could combine these two days and promise a future encouraging hope at the end of these two days’,” Sibel Asna, a board member at Hrant Dink Foundation said.

April 23 is Turkey’s national day of sovereignty, while April 24 is Armenian Genocide Remembrance Day, recognized as a day of mourning by Armenia.

Despite the reconciliatory tone of his work, Dink angered nationalists with his appeals for Turkey to recognize its genocide, and was subject to death threats from Turkish ultranationalists. The European Court of Human Rights ruled in 2010 that Turkey had failed to protect Dink’s life in the face of such threats.

Dink was repeatedly prosecuted for “denigrating Turkishness” over articles he wrote about the genocide and Armenian identity; in 2005, he was handed a six-month suspended prison sentence.