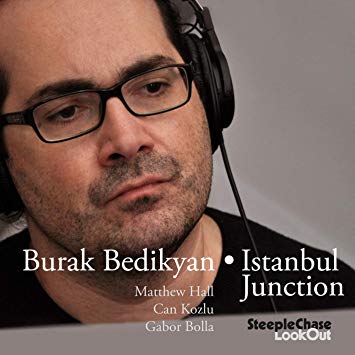 Istanbul-born and New York-based pianist Burak Bedikyan is an inventive composer and intelligent improviser with a subtle touch. His fifth release, the intimate and cinematic Istanbul Junction, showcases his talents fully as he leads a new band through nine of his captivating originals.

The album’s overall ambience is dramatic and darkly-hued, and the various tracks expand within it with vibrant poetry. The main theme of “Moods,” for example, consists of expectant and simmering refrains. These progress into an intriguing and serpentine melody out of which emerge Bedikyan’s dense chords, forming an elegant and crystalline improvisation. Hungarian saxophonist Gabor Bolla contributes a warm, sinewy solo which is yearning and emotive, and fades seamlessly into the closing head.

Equally engrossing is the charmingly angular “Innerview (For Ayse)” which finds Bedikyan, unaccompanied, flirting with dissonance. The tune itself is deeply introspective and passionate with overlapping chords and breathtaking cascades which demonstrate Bedikyan’s virtuosity on the keys.

Bedikyan pays homage to one of his idols, the ingenious 20th century composer Olivier Messiaen, on the moving and mellifluous “L’ombre Lumineuse.” The piece eschews overtly Western Classical phraseology and is more akin to a jazz ballad. Kozlu’s sparkling percussion and Hall’s agile lines form a restless and supportive rhythmic framework. Bedikyan infuses his pianism with a bittersweet melancholy while Bolla builds an intricate extemporization with graceful facility and raw emotion. The ensemble concludes with a sublimely synergistic performance.

Istanbul Junction is a cohesive work, and a high point of Bedikyan’s superb career. As Kozlu points out in the liner notes, Bedikyan has singularly fused various traditions into a personal artistic statement. The record is, perhaps, his most mature and unique to date.