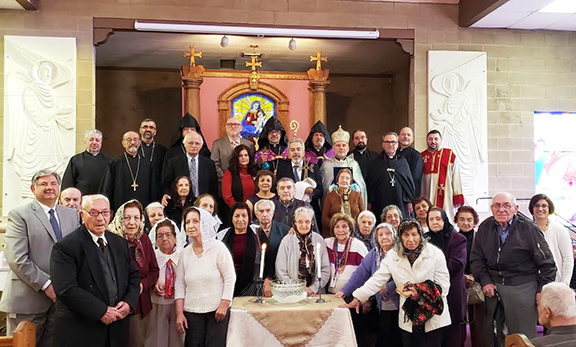 Western Prelate Archbishop Moushegh Mardirossian, accompanied by Vicar General Bishop Torkom Donoyan and clergy members, paid their first visit of the New Year to Ararat Home in Mission Hills to convey well wishes and the good tidings of Christmas to the facility’s administration, staff, and residents. The service took place on Thursday, January 2.

The visit began at the Nursing Facility, where Prelate Mardirossian first and foremost conveyed his New Year and Christmas greetings and blessings to all. He wished attendees good health and for the Christmas message, of love and peace, to take hold in people’s hearts. The Prelate then conducted the Christmas blessing service, which featured special hymns dedicated to the feast, and the blessing of water symbolizing the baptism of Christ. Board of Trustees Chair Joseph Kanimian served as Godfather of the cross. Residents received Holy Communion at the conclusion of the service.

Kanimian expressed gratitude to the Prelate and clergy for their regular visits, care, and prayers, wished all a happy new year, and presented a gift to Prelate Mardirossian. The Prelate commended Kanimian, the Board of Trustees, and Chief Operating Officer Derik Ghookasian for their devoted service, and presented mementos to both Kanimian and Ghookasian. He also presented a memento to Director of Nursing, Susan Yeranyan, who was named 2019 “Nurse of the Year” by the California Association of Health Facilities.

Divine Liturgy followed at the Sheen Memorial Chapel, celebrated by Rev. Arsen Kassabian, who also delivered a sermon in which he invited the faithful to become renewed by the message of Christmas. The Prelate thereafter conducted the blessing of water, with Board of Trustees Vice-Chair Ron Nazeley serving as Godfather of the Cross. The service concluded with the singing of “Great and marvelous mystery” and “Cilicia.”

A luncheon hosted by the administration followed. In attendance were Kanimian, Nazeley, members Peter Darakjian and Maggie Mangassarian-Goschin, Ghookasian, Assisted Living Facility Administrator Rita Noravian, and members of the administration. After Kanimian, once again, conveyed New Year well wishes, the Prelate delivered closing remarks. He again commending the Ararat Home family for their compassionate service and, on this occasion, presented a memento to Noravian. He concluded by reiterating his wishes for a healthy, happy, and peaceful new year.