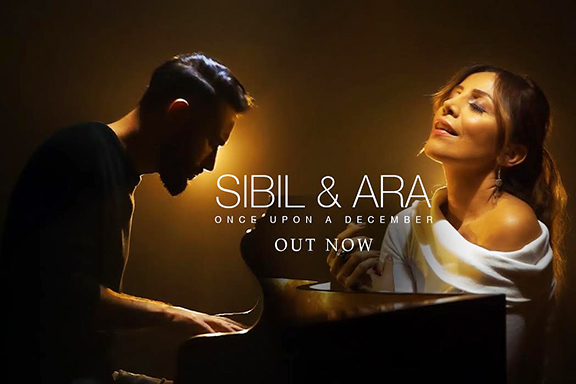 Sibil & Ara Announce Release of ‘Once Upon A December’

A new cover collaboration from Istanbul-born singer Sibil Pektorosoglu and Melbourne born pianist Ara, titled “Once Upon A December” from the film “Anastasia,” has been released. The video was uploaded to YouTube on Sunday amongst much anticipation, with reviews calling it “magical,” “emotionally touching,” and “magnificent.”

“We discussed this project several years ago, and, until now, neither of our hectic schedules allowed for us to be in the same country at the same time,” Ara posted on Instagram, along with the new music video. Sibil, an award winning Western Armenian singer, happened to be in Armenia this December and, by chance, Ara was visiting from Australia. “My phone beeped and it was a 15 second video from Ara playing ‘Once Upon A December’ with a note attached: ‘Sibil, will you sing with me this December?’ and from that point on we had 10 days to record and film the music video whilst we were both in Armenia,” remarked Sibil. Yerevan born cellist Alex Mirzoyan of the Beautified Project was invited to be part of the project, adding his talent as a cellist to the song.

Sibil’s talent as a singer holds an impressive portfolio of awards and performances across the globe, including the 2017 and 2012 “Armenian Music Ambassador” award, the prestigious 2014 “Gomidas” award, the 2014 “Best Singer in the Diaspora Award,” as well as the 2012 “Magical Voice” award at the Armenian Music Awards in Moscow. She has toured the globe with sell-out concerts in nearly every continent including Great Britain, Europe, and North and South America. She has received the “Gold Medal of The Mayor of Yerevan” for her contribution to the dissemination of Armenian music, as well as her charitable activities in Armenia.

Australian born pianist and composer, Ara is a unique talent, never having studied music nor knowing how to read or write notation, playing and composing strictly by ear. He is the two-time winner of the Best Conductor’s Award at the Melbourne Concert Hall, and has an extensive career as an Australian DanceSport Champion for 10 years, earning two National DanceSport Titles at the Australian Institute of Sport as well as 3 consecutive state titles. His career as a celebrity dancer resulted from his appearances on the hit Australian TV series “Strictly Dancing” on the ABC Network. He is an official brand ambassador for Petrof Pianos Czech Republic as well as the face of luxury menswear brand Tateossian London.