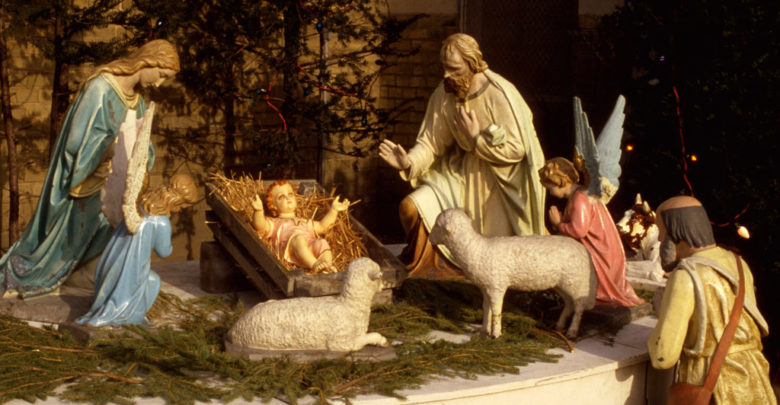 On January 6, the Armenian Apostolic Church celebrates the Feast of the Holy Nativity and Theophany of Our Lord Jesus Christ, which is the commemoration of the Birth and Baptism of Jesus Christ. God was incarnated and appeared to the people.

During the Baptism of Jesus God the Father said, “This is my Son, whom I love; with him I am well pleased” (Mt 3:17) and the Holy Spirit descended on Christ in the form of dove, so God appeared to the people for the second time. So, both Theophanies revealed by means of the Birth and Baptism of Jesus Christ are celebrated in the Armenian Church jointly on January 6.

Celebrant priest pours out the Holy Chrism drop by drop into water and blesses the water. According to the tradition people take some blessed water with them to use it as a medicinal remedy for the sick. After Blessing of the Waters Service the priests visit the houses of the faithful to proclaim the Christmastide Good News of the Birth of Jesus Christ and hence the tradition of Blessing of the Houses was formed.

The Birth of Jesus happened in the following way. “In those days Caesar Augustus issued a decree that a census should be taken of the entire Roman world. … And everyone went to his own town to register. So Joseph also went up from the town of Nazareth in Galilee to Judea, to Bethlehem the town of David, because he belonged to the house and line of David. He went there to register with Mary, who was pledged to be married to him and was expecting a child. While they were there, the time came for the baby to be born, and she gave birth to her firstborn, a son. She wrapped him in cloths and placed him in a manger, because there was no room for them in the inn.” (Lk 2:1-7) The Son of God was born in poverty, in a manger. The witnesses of His Birth were the shepherds living out in the fields nearby, whom the angels had appeared and brought the good news of the Birth of the Savior singing: “Glory to God in the highest, and on earth peace to men on whom his favor rests.” (Lk 2:18)

Soon afterwards some men who studied the stars came from the East and worshiped Baby Christ, presented him gifts and returned to their countries.