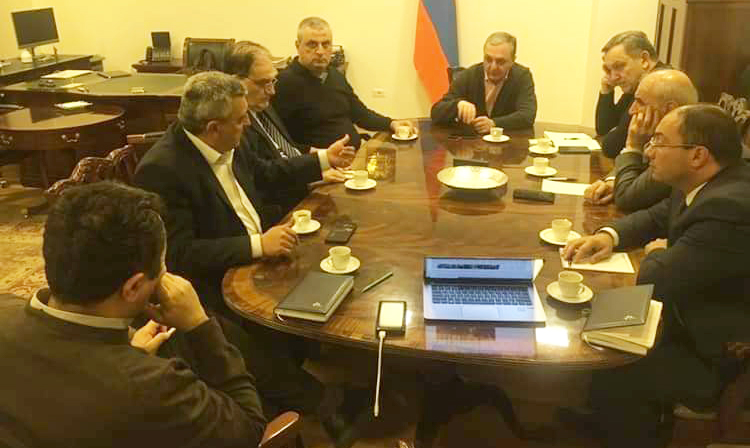 YEREVAN – Amid ongoing tensions in the Middle Eastern region Armenia’s Foreign Minister Zohrab Mnatsakanyan has held consultations on Friday with Ambassador of Armenia accredited in countries of the region, according to foreign ministry spokesperson Anna Naghdalyan.

“Armenia is seriously concerned about the recent incidents in Baghdad which led to human losses. The developments risk further undermining the regional security and destabilizing the situation in the Middle East and beyond,” Naghdalyan said in a statement.

“Armenia calls for the de-escalation of situation exclusively through peaceful means, and will continue to closely cooperate with all its partners aimed at ensuring regional stability and security.” the Ministry said.

Major General Qassim Suleimani, the commander of the Quds Force of the Islamic Revolutionary Guards Corps of Iran, was killed in a drone strike at Baghdad International Airport that was authorized by US President Donald Trump. Suleimani was killed along with several officials from Iraqi militias backed by Tehran. The air strike was carried out by a US MQ-9 Reaper drone when Suleimani’s convoy was leaving the airport.

The 62-year-old spearheaded Iranian operations in the Middle East as head of the elite Quds Force. Soleimani was widely seen as the second most powerful figure in Iran, behind Supreme Leader Ayatollah Khamenei.

The Quds Force, an elite unit of the Iranian Revolutionary Guard Corps (IRGC), reported directly to the ayatollah and Soleimani was hailed as a heroic national figure.

Iranian President Hassan Rouhani vowed retaliation for the killing. “Undoubtedly, the great nation of Iran and other free nations of the region will take revenge for this terrible crime by the criminal Americans,” Rouhani said in a public statement published by Iran’s official news agency.

Iran’s supreme leader has vowed “severe revenge” on those responsible for the death of Soleimani.